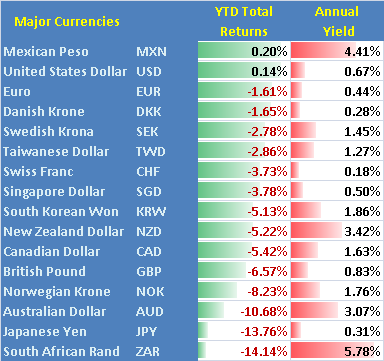 Where can we find Higher Interest Rates? A Look Across the Globe

Article Summary: Interest rates in the United States remain near zero percent while similarly low yields in the Euro Zone, United Kingdom, Japan and other countries have left investors scrambling for yield. Is there anywhere in the world that offers real returns on capital?

A study of all major liquidly and freely traded currencies shows the South African Rand offers the highest annual yield at a respectable 5.8 percent, while the US Dollar is at a paltry 0.7 percent.

In theory you could borrow in US Dollars to buy the South African Rand (sell USDZAR) and collect about 5 percent in annualized yields—not a bad proposition if the USDZAR remains perfectly stable or falls (South African Rand appreciates against the US Dollar).

The problem is simple: 5 percent isn’t enough to offset dismal year-to-date performance in the South African Rand and other high yielders. Some of the worst-performing global currencies in 2013 have been those with the highest interest rates.

With the clear exceptions of strong outperformance in the Mexican Peso and underperformance in the Japanese Yen, year-to-date currency returns match inversely with annual yields. In other words: buying the highest-yielders and selling the lowest at the beginning of the year would have likely resulted in significant losses. But can we reasonably expect similar in the future?

Buying a high-yielder against a low-yielding currency can be profitable if the exchange rate remains unchanged or moves in our favor.

In concrete terms, selling the US Dollar against the South African Rand (short USDZAR) could theoretically provide us with over 5 percent in profits if the USDZAR stayed flat or declined over the year.

The problem is simple: our potential 5 percent annual rate of return could have been erased as the USDZAR surged by that same amount in a mere 4 days through late May. Is it possible that we can see similarly big volatility out of the USDZAR and other high-yield currency pairs through the rest of the year?

For that we look to volatility prices as seen through options markets. We want high yields, but we also want to protect against capital losses. Let’s look at currencies which promise smaller moves and yet carry high interest rates:

We come to a dead end of sorts. South Africa’s annual interest rate offers a substantial advantage over near-zero rates in much of the industrialized world, but traders fear that the US Dollar/South African Rand (USDZAR) exchange rate could rise or fall by 17+ percent in the coming year. (Taking a very approximate interpretation of implied volatility.)

If year-to-date trends are any indication of what we could expect, the USDZAR could finish another 17% higher in the coming calendar year—almost exactly three times the annual yield differential and leaving us with a significant trading loss.

Yields in the G7 are actually worse on a risk-adjusted basis: Australia offers 3+ percent yields but traders predict the Australian Dollar could move by 12 percent in the same period. In other words: you can risk as much as 4 percent to make 1 percent—that doesn’t sound like a very good trade.

We maintain that the low-yielding US Dollar may continue to do well in 2013 as the largest “Bond Bubble” of a generation has burst. High volatility expectations favor the safe-haven US currency not because of its low interest rates, but the fact that many yield-chasers are closing their speculative bets can push the Dollar higher across the board.

Some of the best yield trades may be buying one high yielder against another. Going short USDZAR and AUDUSD at the same time would still provide positive carry while keeping USD exposure far more limited.

To sign up for future research from this author via e-mail, join David’s e-mail distribution list via this link.