Stimulus has become such an engrained aspect to the market’s performance over the past four years, that any potential changes to the central bank-sourced support can have more sway over market performance than traditional fundamentals. Since the Federal Reserve announced its intention to set a time frame throttling back on its own, massive $85 billion-per-month program last week; the market has been shaken to its core.

Given the market’s current performance as of late (and somewhat confirmed by surveys of economists’ expectations measured by Bloomberg and Reuters), the timing for the first Taper move is the September meeting – when the forecast updates and press conference are scheduled. The first move is also seen as a decrease in the monthly Treasury and Mortgage-Backed Securities (MBS) purchases from $85 billion to $65 billion per month. We can see the speculation and reasoning for this outlook in the graphic below.

With three policy officials on the newswires this past session (and four more due tomorrow), we had a significant opportunity to alter the market’s expectations. However, the balance of what was seen is clearly a means for sticking to the general time frame that Bernanke laid out last week – decisions being data dependent rather than date dependent don’t change this as their open assessment of ‘may moderate QE3 purchases later in 2013’ was made against forecast.

Below is a chart of the Fed’s board separated into ‘voters’ and ‘nonvoters’ as well as their relative bias on the future of QE3. In terms of influence on actual policy changes, ‘voters’ comments carry greater weight; but the influence of those outside the circle can still be felt through persuasion – and ultimately the market still respects their comments.

As for the bias, the Dovish / Neutral / Hawkish assessment does not pertain to changes in the benchmark rate – nor even the end of stimulus. The frontier of the debate is in the need and timing of the first reduction in the stimulus program. Therefore, a ‘Hawkish’ central banker believes that the $85 billion per month program should be reduced in the immediate future (next couple of meetings) rather than later. 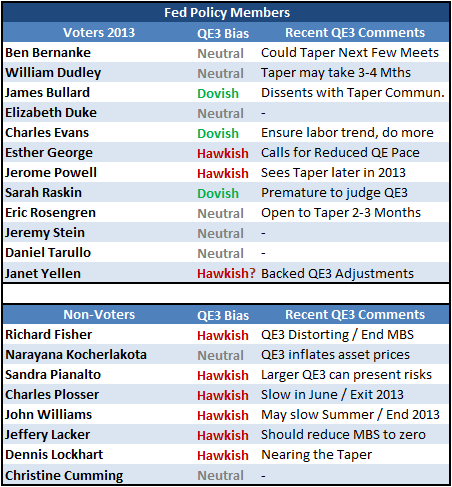 Of course, the most important aspect of all of this for traders is: how does it impact the markets? The Taper is a serious, potential boon for the US dollar. Not only does a moderation of the money supply pump relieve pressure to devalue the currency via natural supply-demand elements; but the withdrawal of support also leverages risk aversion. The greenback is first and foremost the world’s reserve currency and therefore benefits for ‘fear’. That said, the Dow Jones FXCM Dollar Index (ticker = USDollar) is also just off two-and-a-half year highs; so it stands to reason, much has been priced in. 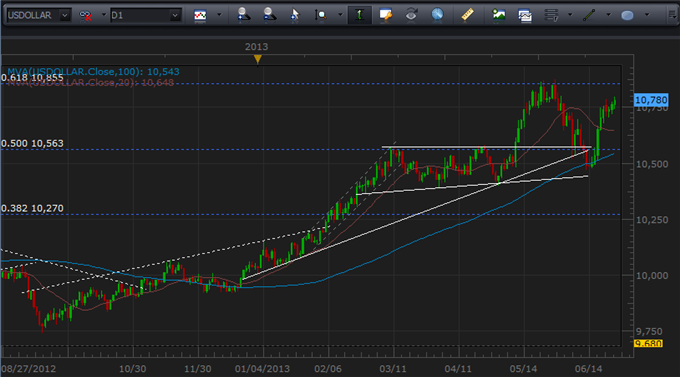 Where we see the real measure of influence in the Taper – which is truly just the first move towards slowing support and still far from turning the corner of accommodative to tightening – is in the S&P 500 and US equities. There is no better measure of the large scale, buy-and-hold interest by the average investor than this asset class. With a forward bias – as with any market – the level of speculation of the taper and impact on investment decisions are best measured in this ‘moral hazard’ propped benchmark. As you can see, we have broken a meaningful support and have seen slowly returned to the turning point. Whether it holds or breaks to advance, it will be a significant recount of investor expectations. 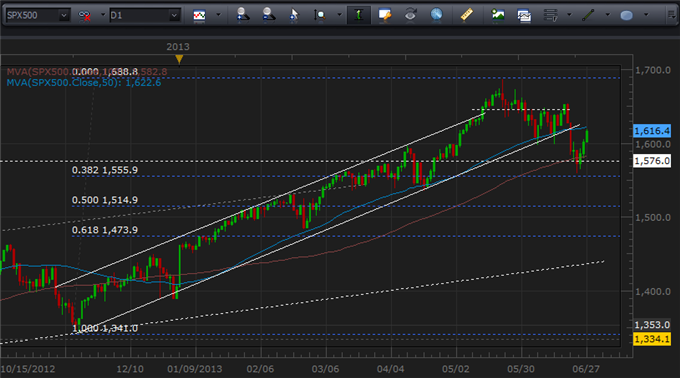