As investors continue to debate the future profitability of Amazon (AMZN) following its most recent earnings report, they should be sure to keep in mind the company’s large holdings of unrepatriated income. These assets could prove to be a key factor in Amazon’s future growth, but remain in limbo due to the combination of currency risk and the United States’ high corporate tax rate.

Recent news concerning Apple’s rare use of debt financing has led to public discussion concerning unrepatriated income, or foreign corporate earnings that have yet to be reinvested back into the United States. These earnings are quite common among large companies with significant international operations. Oftentimes, these US-based firms do not wish to bring earnings back into the United States due to the high corporate tax rate of 35%. In addition to the high tax cost associated with this move is significant currency risk, a topic we have thoroughly discussed in previous articles. The most recent company to engage this discussion is the online retail giant Amazon (AMZN), which has seen substantial overseas growth in recent years.

This growth abroad has resulted in a plethora of cash/cash equivalents and short term investments, currently denominated in currencies other than the USD. Over the last 5 years Amazon’s foreign cash pile has even surpassed its domestic counterpart, growing by approximately 325%.

While these large international holdings provide Amazon with additional fuel for its aggressive growth strategy ($3.7 billion in Capex in 2012 alone), the true future value generated from these holdings differ from their reported amount. If at some point Amazon should need to repatriate this foreign cash pile, they will not only be faced with the aforementioned tax charge; but a possible, hefty influence will also be exacted via exchange rates. These currency fluctuations could be especially damaging if Amazon does not have the luxury of waiting until rates are more favorable before investing into the U.S.

Currently most of Amazon’s foreign cash is denominated in Euros, Pounds, and Yen, although the company does not provide a breakdown of the amount held of each. Regardless, when looking at the movements over the past year of these currencies versus the Dollar, we can see the effect currency translations and US taxes can have on repatriated income. 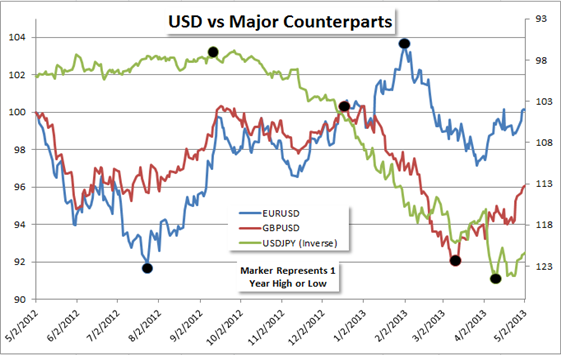 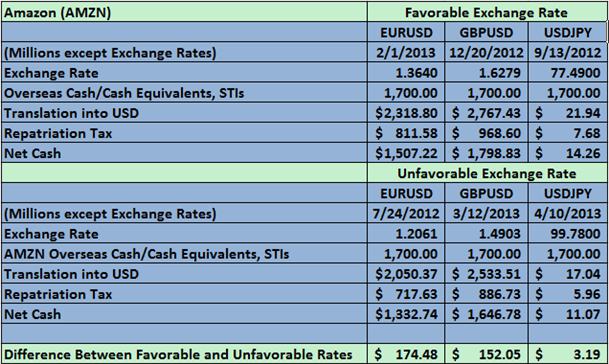 Foreign cash holdings based on 2012 10K and distributed evenly among the Euro, Pound, and Yen

The above example, while based on a hypothetical distribution of foreign earnings and past exchange rates, should provide an idea of the cash burn that international companies can potentially face due to repatriation tax and fluctuating exchange rates.

While the for the time being Amazon appears capable of producing enough cash to fund its prolific expansionary efforts, the future is uncertain and a slowdown in annual cash flows may require the company to reach into its foreign cash holdings. Investors who hold amazon stock, should therefore follow the company’s cash production and expenditures closely, as well as EURUSD, GBPUSD, and USDJPY rate movements.