Excited By Yahoo Stock? Keep The Yen In Mind

As Yahoo (YHOO) focuses on rebuilding its brand amid major competition, it has also been forced to face another threat, in the form of a depreciating Yen. Falling Yen values do not threaten the company from a supply-side or demand-side perspective, but rather due to the company’s investment in its Japanese counterpart, Yahoo Japan (YAHOF).

Yahoo currently owns 35% (approximately $9.3 billion) of Yahoo Japan, a joint venture between the U.S. search engine and the Japanese software firm SoftBank (SFTBY). As a result of this joint venture, Yahoo receives compensation in the form of a percentage of total Yahoo Japan revenues and dividend payments from Yahoo’s equity stake. This compensation is significant and has been growing, specifically regarding Yahoo’s equity investment in Yahoo Japan.

The Risk and The Hedge

The relationship between Yahoo and its Japanese counterpart results in serious currency risk as payments made to Yahoo come in the form of Japanese Yen and not U.S. Dollars. As we have highlighted in previous articles, appreciation of the foreign currency over a reporting period (the Yen in this case) leads to higher revenues, while depreciation leads to lower reported revenues. Therefore, given the Yen’s extreme depreciation in recent months, one would have expected Yahoo’s Japanese revenues to suffer greatly. In a bout of impressive foresight, however, Yahoo anticipated the Yen’s depreciation prior to the currency's major drop off and began hedging this risk. Beginning in December of 2012 and leading into January 2013, Yahoo entered into a series of forward contracts, with a combined notional value of over $3 billion dollars. These contracts, with maturities of between 9 and 12 months, had accumulated some $3 million in unrealized gains by the end of 2012. These gains are now expected to be exponentially higher given the Yen Spot’s 13% gain year to date.

So what does this all mean for the future profitability of Yahoo? It is key to remember that any gain or loss on Yahoo’s hedge positions will not be known until the company’s contracts begin to expire over the next several months. During this time any gains or losses will not directly affect the company’s earnings per share (Due to Generally Accepted Accounting Principles), but will rather increase or decrease the company’s cash balance, potentially by hundreds of millions of dollars. With a company like Yahoo, currently holding $2.6 billion in cash and cash equivalents as of Q1 2013, a major increase or decrease in cash holdings should be significant to the company’s overall success, as it aims to continue its rebuilding efforts through acquisitions and restructuring. This includes over $500 million dollars’ worth of PP&E acquisitions in 2012 alone. Investors holding Yahoo stock should therefore pay close attention to the movements of the USDJPY, which has shown strong a correlation with Yahoo stock over the last year and will likely determine a significant cash gain or loss for the company in the coming months. 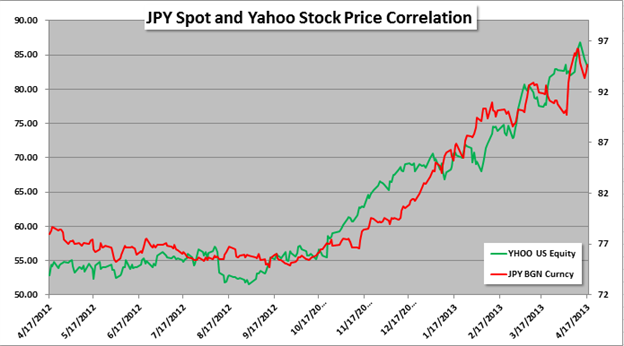 For any comments on this article please email feedback@dailyfx.com