Article Summary: JP Morgan Chase (NYSE: JPM), the largest bank in the United States, has seen its stock price fluctuate with US Dollar moves. Here’s why and how you might protect against it.

JP Morgan Chase (NYSE: JPM) is the largest bank in the United States and its stock price has seen significant sensitivity to moves in the US Dollar. In recent weeks we have discussed the impact of currency fluctuations on corporate earnings and stock price by looking at the supply-side and demand-side of a company’s operations.

This week we will focus on a more complicated, but just as relevant, aspect of currency risk, specifically the effect that foreign exchange fluctuations have on the earnings of financial organizations. JP Morgan Chase provides a great example of such an institution given its diverse international exposure and popularity among investors.

In the past banks were generally able to avoid providing detailed disclosure of theirfinancial holdings abroad. Recent regulatory changes by the SEC following the financial crisis, and continual struggles in Europe, have forced greater admission from banks. This has provided investors with greater insight into the risks that banks face while investing overseas. When looking at JPM specifically, for instance, we find that the bank holds $8.7 trillion (Yes, with a T!) in foreign exchange derivativesalone. While much of this is used for speculative purposes, a great deal is also dedicated to hedging against currency exchange risk, a major problem due to JPMs significant exposure in foreign markets.

In total JPM’s foreign exposure has provided the bank with over $775 billion in combined assets, fueling $18.4B in international revenues (FY 2012). But the earnings generated by these assets can rise and fall significantly in the face of currency fluctuations, most notably with regards to the Euro-Dollar pair. When JPM invests Euro-currency nations, it does so in Euros, not dollars. As a result, the returns generated from these investments, in the form of capital gains, interest, principal, etc., are provided in Euros. These earnings, however, must then by converted into dollars for reporting and operational purposes.

If the Euro appreciates versus the dollar, asset returns will be inflated since JPM will receive proportionally more dollars per Euro then they when they first invested, all other things being equal. The opposite applies, however, if the Euro depreciats versus the dollar. In this case JPM will receive less dollars for each Euro, which will decrease reported earnings. This fact has in part lead to the historically positive correlation between the Euro and JPM stock price. 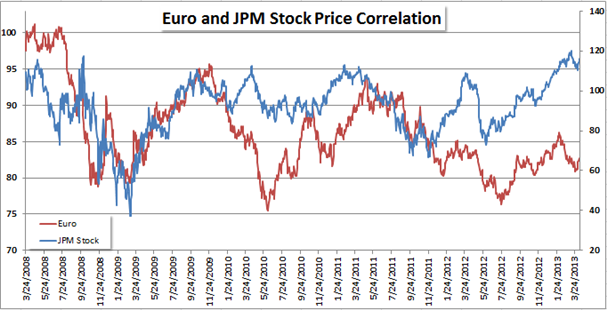 This correlation is also evident when looking at JPM stock price versus the pound, given the banks significant holdings within the UK. 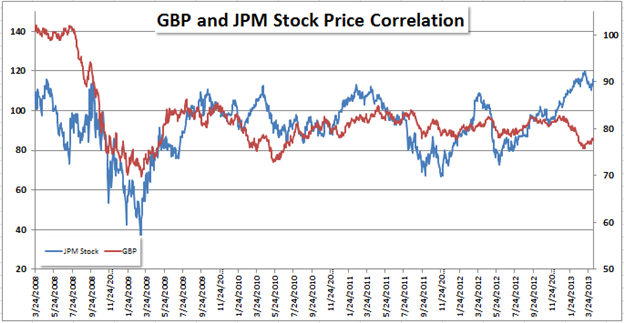 Given these correlations and the volatility we have recently seen in currency markets, it may be wise for equity investors with exposure to international banks to hedge their positions by holding certain currency positions. For instance, between the period April 9th and and July 12th of 2010, JPM stock fell over 14%. During this same period, the USDEUR short rose by over 7%, providing a much less painful three months had an investor gone long the Euro against the US Dollar.

Past performace is not indicative of future results, but we believe that the EURUSD will continue to offer a meaningful hedge against fluctuations in JP Morgan’s stock price.

US Dollar Forecast: Stuck Between Treasuries, Equities as Emerging Markets Push On
2021-01-27 06:00:00
Advertisement