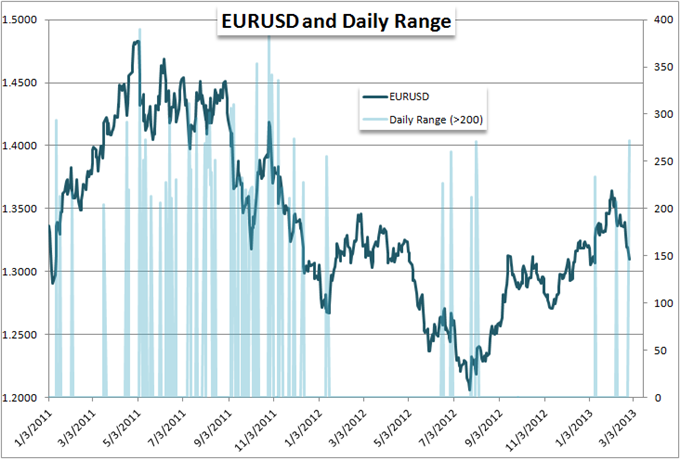 We have kicked off the new trading week with an incredible swell in volatility. Individual moves from the Euro, Japanese yen, British pound and US equity markets are particular stand outs given the tepid price action we have grown so used to over the past months.

Many traders are flocking to the biggest movers after the fact, looking for another swell that they can place a quick trade that has the same amplitude and short shelf life that those that were trading Monday’s New York session took advantage of. Yet, therein lies the critical question: was this dramatic bout of volatility a one-off founded through the happenstance culmination of different fundamental events? Or, was this a common spark to a singular theme: market-wide risk aversion…

One of the most discussed market-movers through the open of the week was EURUSD. As the benchmark pair for the currency market, the incredible activity level (the day’s range was the biggest since November 30, 2011 – as seen above) draws the focus; but the activity was more broadly attributed to the euro itself rather than the EURUSD. The shared currency dropped against all of its major counterparts through the past session. 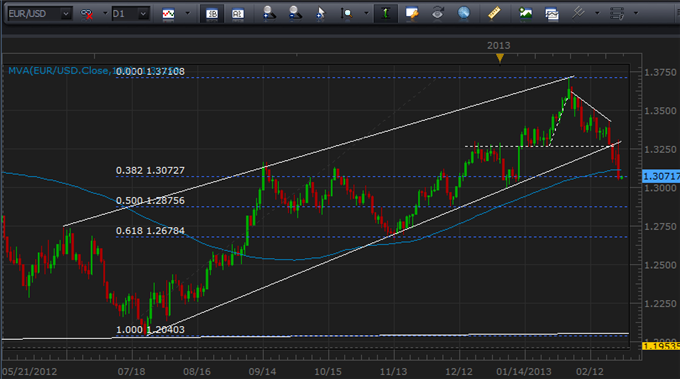 The technical progress this pair makes is important, but a lasting trend requires persistently shifting fundamental conditions. This looks very much a spark that began with theItalian election, but this uncertainty leadership will be settled relatively quickly. Continuation on the EURUSD’s tumble – and all other euro turns – will require something along the lines of a return of Euro-area crisis fears and/or a general risk aversion shift…

Are you looking for other ways to interpret support and resistance levels? Take our free course on trading Fibonacci Retracements!

The Pound – Moody’s Downgrade, Now What?

The pound opened the week with a bearish gap against nearly all of its liquid counterparts. Considering the only lull in this around-the-clock market occurs during the weekends when most banks are offline, the spark for this biggest gap since September 2011 (seen below) speaks to event risk that occurred during this downtime. 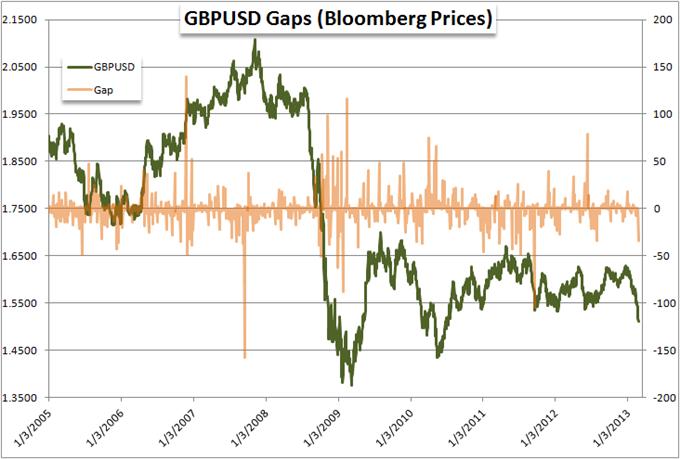 The spark was Moody’s downgrade of the United Kingdom coming minutes before the currency market’s completely drained for liquidity – and well after the London markets were offline. Once again, this is a unique factor that stoked volatility for the sterling; but is it a lasting catalyst or a temporary fan to the flame? Having already dropped 1100 points from peak to trough so far this year, GBPUSD has covered serious ground in the selloff.

The downgrade contributes to underlying worries that the austerity / recession balance Prime Minister Cameron and Chancellor of the Exchequer Osborne have attempted maintain are doomed. Yet, the market has worked to discount that concern for some weeks; so follow through may be limited at this point. Once again, the best driver on this front is risk trends.

While the euro and pound moves were impressive, the yen’s surge Monday was arguably the most profound. USDJPY posted its biggest daily decline since mid-2010 (see below) – a dip that comes after the longest period of weekly gains on record. The tempting shift is extremely interesting as it can signal the beginning of a much more prolific reversal for all of the yen crosses – which have seen the Japanese currency devalued approximately 20 percent in the span of just five months. 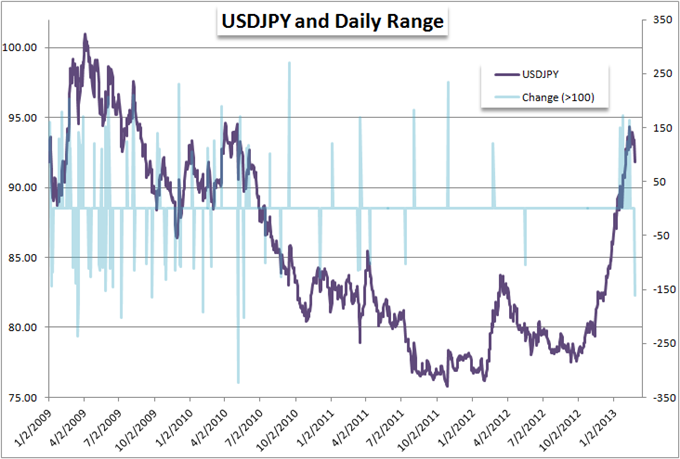 Once again, there is a possible stand alone spark for the Japanese yen in that the volatility comes after news that Japanese Prime Minister Abe was supposedly looking to Haruhiko Kuroda – an ardent campaigner for fighting deflation – as the replacement for outgoing Bank of Japan Governor Masaaki Shirakawa. Hope of an accelerated or expanded stimulus program initially encouraged the USDJPY and other yen crosses higher, but the follow through effort quickly diminished. That is to be expected as the baseline assumption is that the incoming central bank head will almost certainly be friendlier to the government’s appeal for more stimulus to end deflation, help the economy and – many believe – devalue the currency.

Given the prevailing assumptions though with the BoJ, there is little in the upcoming event horizon that can reasonably be assumed to be an active bearish catalyst for the yen crosses (bullish for the yen). Therefore, to keep this remarkable downdraft going, the markets will have to render these pairs generally ‘overbought’. The best way to capitalize on such beliefs is to develop a lasting catalyst – and once again, the readymade engine for such a move would be sentiment trends. Surprisingly enough, the yen crosses could be the most volatile respondents to a lasting risk aversion shift.

US Equities – Where the Stimulus Is

For the EURUSD, GBPUSD and USDJPY, the source of volatility can be claimed to be specific and thereby temporary. However, there is initial evidence that the fundamental drive for these pairs’ individual turns and activity levels have a common elemental driver. A strong indication of an elemental driver is the performance from the S&P 500. Not only is this index a benchmark for a simplistic investment strategy for large pools of capital (buy shares or exit market), it is one of the most responsive markets to stimulus. Therefore, a drop in this flag bearer is a measure of risk aversion strong enough that it overwhelms ‘hope’ for more stimulus to withdrawal risk. 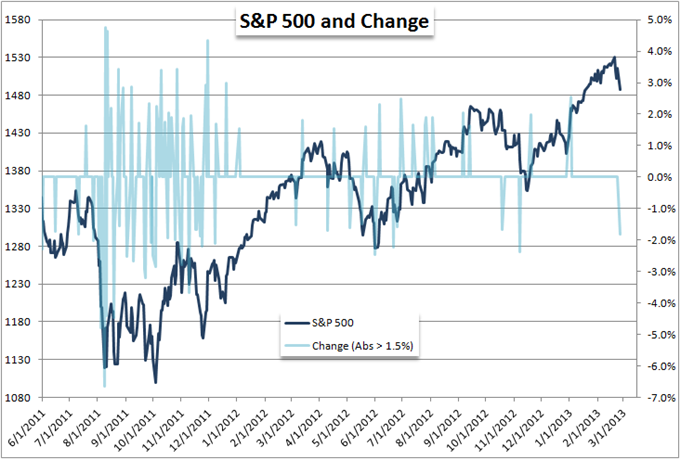 In the chart above, we see that the daily drop from the S&P 500 was the biggest seen in nearly four months. Daily moves larger than 1.5 percent have proven to be quite rare over the past year, and frequently align to short-term reversals. However, we need to consider whether this is an ‘exhaustion’ or ignition for a ‘continuation’ move. 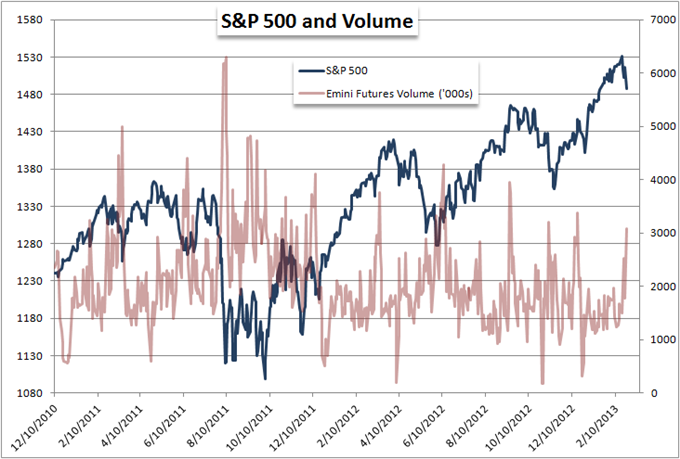 Looking a little more closely at the S&P 500, we find above that futures market volume for the index (the index itself saw rather tame levels of turnover, which is itself remarkable for participation and product use aspects) posted one of the biggest swells in activity in some time.

And, from a basic technical consideration (seen below), we find a notable break from congestion that can set the tone for a more meaningful turn in exposure – should the fundamental reasoning develop. 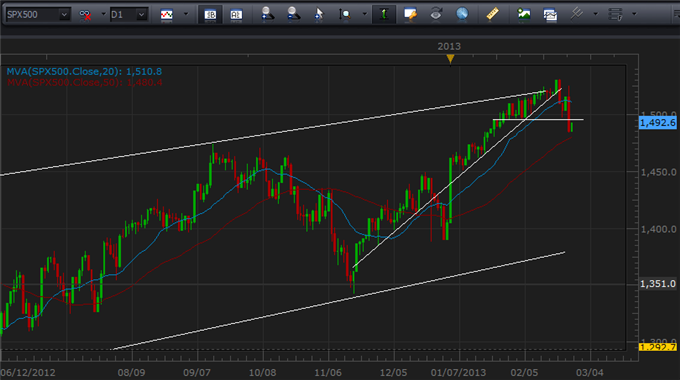 Volatility and Risk – Where the Real Momentum Will Come From

If we are to see a lasting trend develop for the nascent EURUSD and USDJPY bear moves, individual catalysts are unlikely to be sufficient. The Italian election will play through relatively shortly; and unless the end results spurs fear of an anti-euro policy from the newly anointed political body, outright fear will settle quickly. For the yen, we are almost certainly to find new BoJ leadership that will push forward the stimulus drive. Therefore, to keep things moving, we need a market aspect that has sufficient influence and enough pent up drive to keep different asset classes engaged. The most immediate spark that can fulfill that requirement is underlying risk trends. 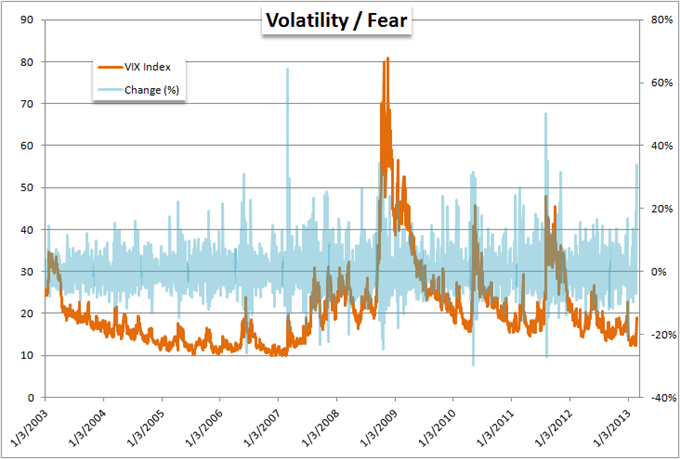 In the graph above, we find the VIX Index – the three-month implied (expected) volatility measure for the S&P 500 – and its daily change. The jump from Monday isn’t really recognizable when compared to the 2008 financial crisis swell or the peaks from April 2010 or August 2011; but we recognize the level of activity when we see how aggressive the move was from Friday to Monday in percentage change terms. The 34 percent increase in the index was the fifth largest one-day increase in a decade. 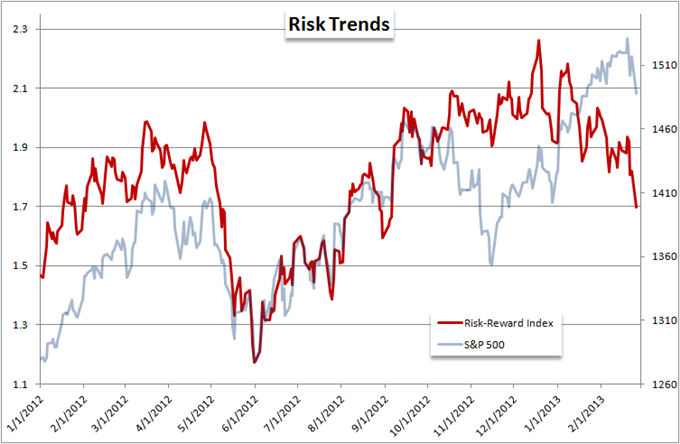 The S&P 500 is a good measure of sentiment because it also includes the expectation for stimulus. Yet, to establish how considerable an influence assumptions of more external support actually have over price action, we should look for a fundamental comparison to the sentiment laden index. That is where the above Risk-Reward Index comes in. Underlying elements of return potential versus volatility expectations have been souring for some time. If the stimulus-bearers start to follow these bigger fundamental themes, we may have strong winds ahead.