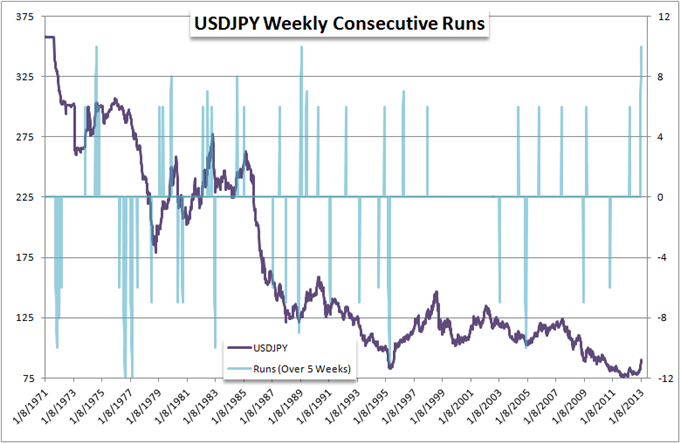 With Friday’s close, USDJPY will have closed its 10th consecutive, weekly advance. Alone, that statistic is impressive; but looking into history we better appreciate the sheer scope of this incredible run. Since the gold standard was abandoned back in 1971, USDJPY has produced only two other instances of 10-week consecutive advances and there are no examples of 11 (see graph below).

Looking back at the previous 10-week rallies, the end of their respective runs did not lead to a wholesale trend change. That is like the same situation we now face where USDJPY is just beginning to make a serious turn off of record lows under a pivotal shift in Japan’s monetary policy regime. On the other hand, after the 10th week was notched, short-term corrections did develop.

With the previous run of this magnitude – through the week of February 3, 1989 – the pair rallied a cumulative 855 pips. The correction that developed lasted the following two weeks for a total of 375 pips (-116 pips the first week and -259 the second).

The first instance of this incredible run occurred through the week of August 23, 1974. This particular run was far more aggressive with a 2,055 pip surge. The correct that ensued took longer to get off the ground, but it moved further (commensurate to the initial climb). The total 725 pip correction began with only 18 pips of decline the first week and 28 pips the second week.

The Bank of Japan Will Try to Make it 11 Weeks

As the saying goes, ‘past performance is not indicative of future results’. Just because we had two 10-week rallies before, does not necessarily mean we have a correction next week. However, the probabilities are far higher under these circumstances than they would be under most other conditions. Whether a correction for USDJPY and the rest of the yen crosses occurs and how far it goes will have a lot to do with the fundamentals.

In the coming week (January 22 specifically), the Bank of Japan is scheduled to announce its intentions after the two day policy meeting (no time is given, though it usually occurs between 2:30 and 4:00 GMT). This event is particularly important because it places to the underlying fundamental element to its meteoric rise to this point – stimulus. The Japanese government had significantly increased its verbal effort to talk its currency down in the second half of last year and the BoJ made increases to its asset purchase program a semi-regular endeavor. This dynamic was severely amplified recently though when the government switched hands back to the Liberal Democratic Party (LDP). One of returning Prime Minister Shinzo Abe’s chief goals was to lower the national currency by whatever means necessary.

Though the government introduced a 10.6 trillion yen program last week to help push forward the growth-building and money-inflating effort, it falls far short of the plan needed to sustain an ongoing trend of weakness behind the yen. To accomplish this initiative, the BoJ has to step in with an unlimited stimulus program that can offset the moves that have been made by its US and European counterparts. The expectation here is that the otherwise independent central bank to fall in-line with the government’s plan to initiate a stimulus plan that will continue to expand the central bank’s balance sheet (increase the amount of yen circulating in the system) until a 2 percent inflation target is met.

That is the baseline expectation and what the market has likely priced in through this surge to two-and-a-half year highs. Anything that falls short of these assumptions will likely be seen as a reason for a good portion of the speculative longs to take profit and therefore spark a correction for USDJPY. Furthermore, even if the program meets structural expectations, there will still be details that could undermine the continued climb (such as small, monthly purchases of assets). Also, for this pair specifically, there will also be an issue of dollar fundamentals. A vote on extending the US Debt Ceiling another 3 months is another big ticket item that can generate interest – among other things. 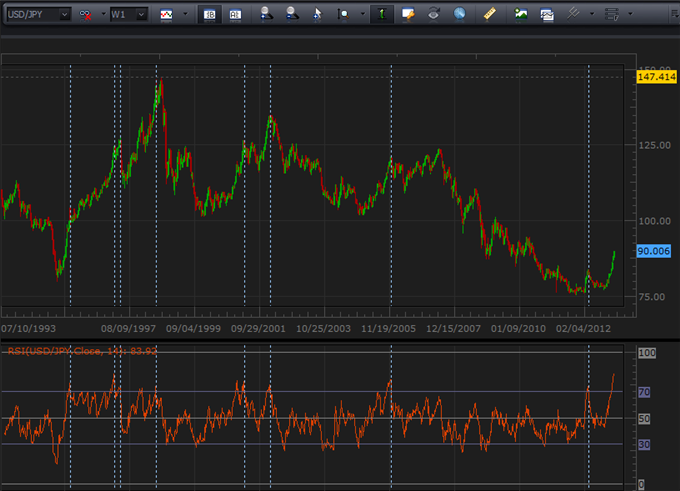 It should be no surprise that this incredible run also has serious implications from a technical perspective. Looking at the above weekly chart of USDJPY, we can appreciate the magnitude of this surge when we look at the RSI (using the standard 14-period input). First of all, the current 84.2 reading is the highest on record. Besides that, however, we have plenty of instances in the past two decades of readings above the important 70-figure. Each cross back below the important ‘over-extended’ threshold has led to notable reversals.

In the chart above, we can see a number of those instances and the subsequent impact on underlying USDJPY price action. Keep an eye on this pair and its fundamental catalysts.