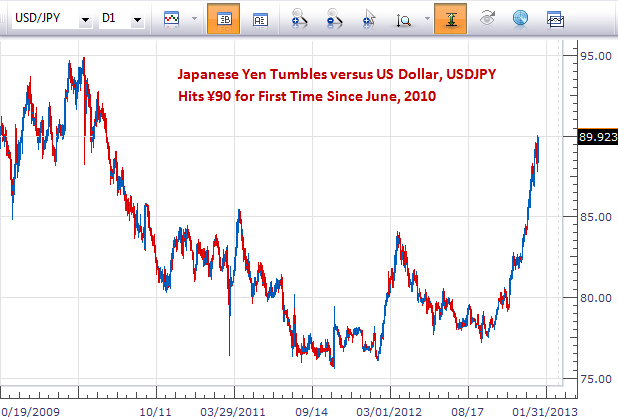 The Japanese Yen has fallen sharply across the board, and it now trades at the ¥90 against the US Dollar for the first time since June, 2010. Why has the Japanese Yen fallen so sharply, and more importantly, can it continue higher?

Japanese Yen Tumbles to Fresh Multi-Year Low Versus US Dollar

We first called for a substantive Japanese Yen top (USDJPY bottom) in August of 2012 as extremely one-sided sentiment warned that an important turning point was near.

Since then, however, the opposite may have occurred; speculators are now extremely net-short the Yen (long USDJPY) as the currency falls to fresh multi-year lows. A big reason the Yen has declined remains that the new Japanese government has pressured the Bank of Japan to ease monetary policy.

We recently wrote that the Japanese Yen looked at particularly strong risk of a reversal, but anticipating major reversals in trend is extremely risky and we were clearly early in our forecast. 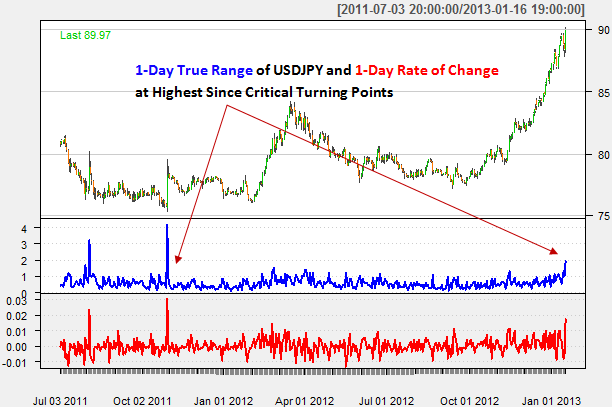 Yet today’s USDJPY surge takes it to its single-largest daily trading range and gain since the pair set record-lows in 2011. That in and of itself does not guarantee that an important turn is near, but it does warn that we are likely closer to a short-term top than further continuation. A look at oscillators likewise warns we are near trend exhaustion as price momentum is at its most bullish since 1997.

USDJPY Weekly Relative Strength Index Reading At its Highest Since 1997 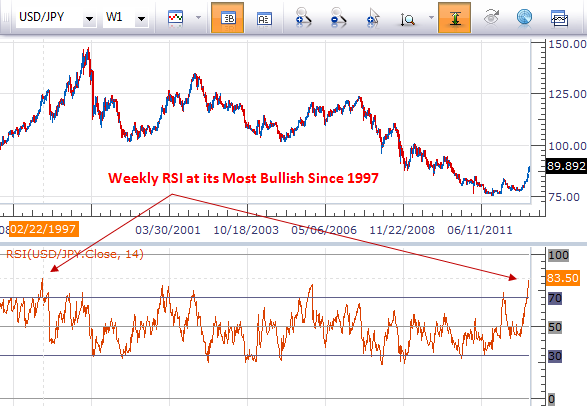 The risk of real Japanese Yen reversal is significant. Yet we can’t stress enough that catching major trend turns is exceedingly difficult. Yet potential reward on a JPY turnaround is substantial, while risk of further USDJPY strength looks comparatively limited.