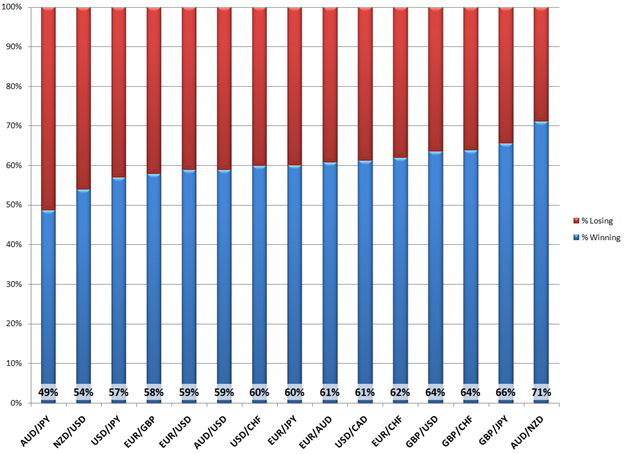 Forex Education: Why do Many Traders Lose Money?

Why Do Many Forex Traders Lose Money?

In our Traits of Successful Traders series, the DailyFX Research and Education teams go through a year’s worth of trades from actual clients and discusses the results along with surprising conclusions.

Strong growth in forex trading has brought a significant increase in the number of new traders, but the influx has been matched by a similar outflow of existing traders. Why? This article discusses arguably the most important question of all – why do many forex traders lose money?

Many forex traders have significant experience trading in other markets, and their technical and fundamental analysis is often quite good. In fact, in almost all of the most popular currency pairs that FXCM clients trade, traders are correct more than 50% of the time:

The above chart shows the results of a data set of over 12 million real trades conducted by FXCM clients worldwide in 2009 and 2010. It shows the 15 most popular currency pairs that clients trade. The blue bar shows the percentage of trades that ended with a profit for the client. Red shows the percentage of trades that ended in loss. For example, in EUR/USD, the most popular currency pair, FXCM clients in the sample were profitable on 59% of their trades, and lost on 41% of their trades.

So if traders tend to be right more than half the time, why do most forex traders lose money? 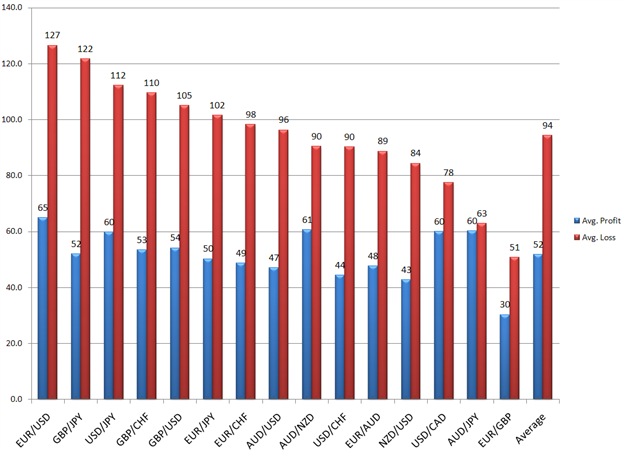 The track record for the often-volatile GBP/JPY pair was even worse. Traders were right an impressive 66% of the time in GBP/JPY – that’s twice as many successful trades as unsuccessful ones. However, traders overall lost money in GBP/JPY because they made an average of only 52 pips on winning trades, while losing more than twice that – an average 122 pips – on losing trades.

Countless trading books advise traders to do this. When your trade goes against you, close it out. This is difficult to do because it is going against the great deal of work and research you performed to first enter the trade. Closing it out at a loss is admission that you were wrong—invalidating everything you did that went into that trade.

Worse than admitting you’re wrong, however, is letting a small loss balloon into a large one. This is exactly the mistake we watch time and time again: traders are too willing to hold onto a losing trade in the hopes that it will come back. And to be clear, a trade can come back and there will definitely be times that you will have avoided a loss by holding onto a small loser. But those large losses completely ruin the potential reward on your overall trading.

Conversely, when a trade is going well, do not be afraid to let it continue working. You may be able to gain more profits. After taking a series of losses or perhaps one especially large loss, it is natural for us to take profits on a trade due to fears that it can go against us. Taking profits also proves that we were right—the hard work that went into the trade was valid and it feels good. Yet letting losses run and cutting profits short is how many traders lose money.

Avoiding the loss-making problem described above is pretty simple in theory, though it is admittedly difficult in practice. When trading, one rule is critical: always seek trades that offer larger potential rewards than losses. This is nothing groundbreaking, and almost every trading book will tell you the same thing.

According to our data on real traders, the average reward/risk on EURUSD trades was 127 pips in average losses versus 65 pips in gains—approximately 1:2.Given that reward/risk, traders would have had to make profits on at least 66 percent of all trades to ultimately make money. Unfortunately the true win percentage was 57 percent and helps explain why most lost.

You should always use a minimum 1:1 ratio.

Once you have a trading plan that uses a proper reward/risk ratio, the next challenge is to stick to the plan. Remember, it is natural for us to want to hold on to losses and take profits early, but it makes for bad trading. We must overcome this natural tendency and remove our emotions from trading.

The best way to do this is to set up your trade with Stop-Loss and Limit orders from the beginning. 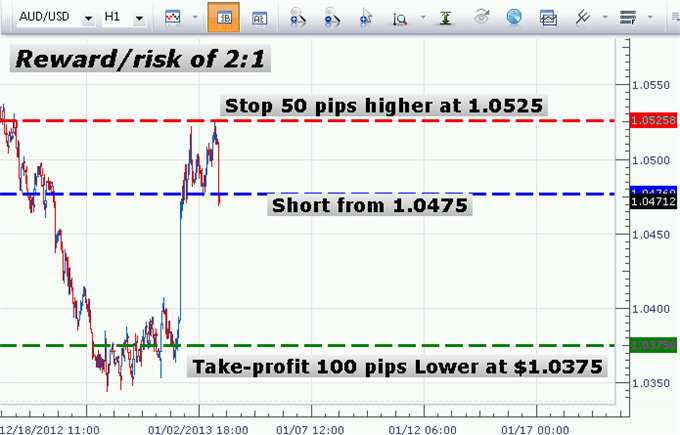 The 2 lines in the chart above show the hypothetical returns from a basic RSI trading strategy on USD/CHF using a 60 minute chart. This system was developed to mimic the strategy followed by a very large number of FXCM clients, who tend to be range traders. The blue line shows the “raw” returns, if we run the system without any stops or limits. The red line shows the results if we use stops and limits. The improved results are plain to see.

For our Stop and Limit settings in this model, we set the stop to a constant 115 pips, and the limit to 120 pips, giving us a reward/risk ratio of slightly higher than 1:1. Since this is an RSI Range Trading Strategy, a lower reward/risk ratio gave us better results, because it is a high-probability strategy. 56% of trades in the system were profitable.

Also, in general, a reward/risk of 1-to-1 or higher was more profitable than one that was lower. The next chart shows a simulation for setting a stop to 110 pips on every trade. The system had the best overall profits above 1:1. In the chart below, the left axis shows you the overall return generated over time by the system. The bottom axis shows the reward/risk ratios. You can see the steep rise right at the 1:1 level. At higher reward/risk levels, the results are broadly similar to the 1:1 level. 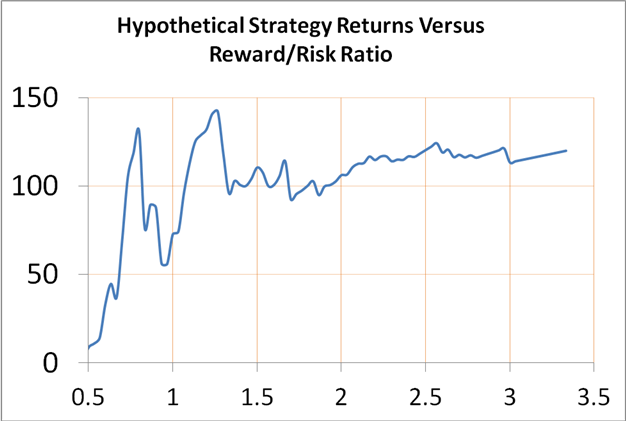 Again, we note that our model strategy in this case is a high probability range trading strategy, so a low reward/risk ratio is likely to work well. With a trending strategy, we would expect better results at a higher reward/risk, as trends can continue in your favor for far longer than a range-bound price move.

Trade forex with stops and limits set to a reward/risk ratio of 1:1 or higher

Whenever you place a trade, make sure that you use a stop-loss order. Always make sure that your profit target is at least as far away from your entry price as your stop-loss is. You can certainly set your price target higher, and probably should aim for 2:1 or more when trend trading. Then you can choose the market direction correctly only half the time and still make money in your account.

View a presentation from the FXCM Trading Expo on the same materials.

The DailyFX Research and Education team has been closely studying the trading trends of FXCM clients, utilizing the trade data at FXCM. We have gone through an enormous number of statistics and anonymous trading records in order to answer one question: “What separates successful traders from unsuccessful traders?”. We have been using this unique resource to distill some of the “best practices” that successful traders follow, such as the best time of day, appropriate use of leverage, the best currency pairs, and more. You can learn more about the project and see further research at the Traits of Successful Traders webpage.