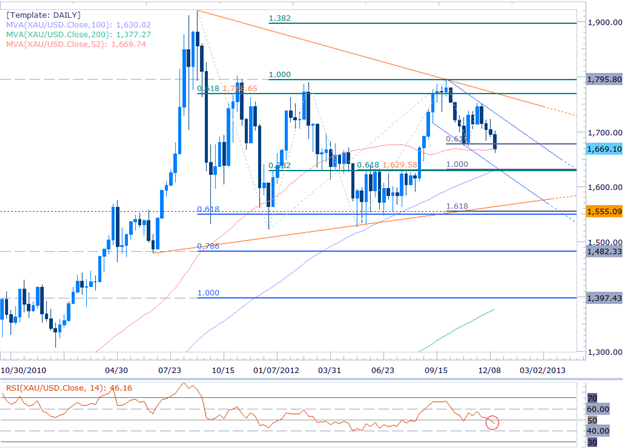 Forex Forecasts: Gold Prices at Risk Despite Ultra-Dovish Fed in 2013

Gold prices sold off ahead of the New Year despite an ultra-dovish US Federal Reserve, and gold will face further headwinds in 2013 as outlook for global growth deteriorates.

The highly accommodative policy stance held by central banks across the globe may prop up gold prices going into 2013, but the weakening outlook for the world economy is likely to push bullion lower as demand wanes.

The ongoing expansion in the Fed’s balance sheet may keep gold prices supported over the near to medium-term as the easing cycle in the world’s largest economy dampens the appeal of the U.S. dollar. As the Federal Open Market Committee (FOMC) adopts a ‘qualitative guidance’ for monetary policy, the protracted recovery in the labor market paired with the persistent slack in private sector activity may encourage the central bank to preserve a dovish policy stance in the year ahead, and the Fed may see scope to further expand its open-ended asset purchase program as inflation is expected to hold around the 2% target over the coming years. However, the 2013 FOMC may scale back their willingness to expand monetary policy further as the central bank anticipates a faster recover next year, and we may see a growing number of Fed officials strike a more neutral tone over the coming months as the economic recovery becomes more broad-based.

Indeed, the International Monetary Fund lowered its fundamental assessment for the world economy and trimmed its 2013 growth outlook to 3.6% from an initial forecast of 3.9% in October. The IMF cut its forecast for the advanced economies by 0.3% to reflect a 1.5% rate of growth, while Emerging and Developing economies are projected to grow 5.6% during the same period, which is 0.2% lower from the October report. At the same time, the World Bank struck a similar tone to the IMF as it sees a more pronounced slowdown in the global economy, with the group calling for a 3.1% expansion in 2013 versus the 3.6% forecast released in June. Moreover, the World Bank warned that developing countries are more vulnerable to external shocks than in 2008 amid the ongoing turmoil in the world economy and the weakening outlook for global growth should push gold lower in 2013 as demand falters.

The deepening recession in the euro-area along with the slowdown in China casts a bearish outlook for gold as future growth prospects remain weak. As the debt crisis continues to drag on the real economy, record-high unemployment along with the downturn in private sector activity may produce a prolonged contraction in Europe, and the region may struggle to return to growth in 2013 as policy makers retain a reactionary approach in addressing the risks surrounding the region. Meanwhile, China may face a more pronounced slowdown in the year ahead as the government moves away from its export-driven market to encourage a consumer-based economy, and easing trade conditions in the world’s second largest economy curbs the outlook for gold prices over the longer-term. In turn, the precious metal should continue to give back the rebound in 2012 ($1526) and we will maintain a bearish forecast going into 2013 amid the slowdown in global growth.

A look at the encompassing structure sees gold trading within the confines of a triangle formation dating back to the 2011 all-time highs at $1920. The recent break below the 61.8% Fibonacci extension taken off the 2012 highs at $1677 puts a bearish tone on bullion with key interim support seen at the three-way confluence of the 100% extension, the 61.8% retracement taken from the ascent off the May 2012 lows and the 100-week moving average at $1630. Note that weekly RSI is now below the 50-mark for the first time since August and marks the first directional break below this level since early March when the price of gold fell from the $1700s into the yearly lows around $1526. A break below the 40-threhold in the oscillator offers further conviction on our bias with such a scenario eying critical support in the region between the 161.8% extension and a longer term extension taken from the all-time highs and this year’s highs at $1550-$1555. Note that triangle support also rests in this range and if compromised, risks substantial losses for the yellow metal.

Gold continues to trade within the confines of an embedded descending channel formation off the yearly highs with breach above trendline resistance offering a reprieve to the battered metal. Such a scenario eyes resistance at the 61.8% retracement taken from the decline off the record highs at $1768 with only a breach above the 100% Fibonacci extension taken from the 2011 and 2012 lows at $1795 (also the 2012highs) invalidating our medium-term bearish bias.