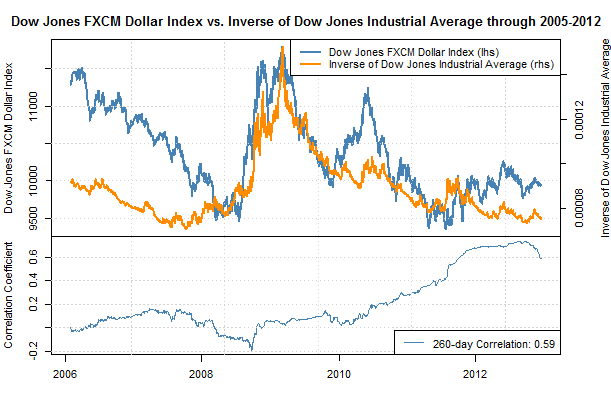 Forex Forecasts: US Dollar Outlook Fraught with Risk in Q1

A year’s worth of uncertainty left the US Dollar almost squarely unchanged versus the Euro in 2012, and a number of unanswered questions promise similar indecision into the New Year. We believe that a number of threats to global financial markets should favor the safe-haven US currency. Yet forex market volatility stands at its lowest levels since the onset of the financial crisis; current ‘risk’ trends could bring continued US Dollar weakness into the first quarter of 2013.

The past year has been marked with considerable risks to the global economy—Euro Zone fiscal crises, US political risks, and signs of slowdown in Chinese economic growth were among the major threats. Yet investors ultimately looked past tail risk and sent the US S&P 500 to an annual gain near 15 percent.

Record-low US interest rates make it expensive to hold the Greenback, and further outperformance in risky asset classes would likely push the USD to further lows. In fact, the correlation between the Dow Jones FXCM Dollar Index and the Dow Jones Industrial Average continues to trade near record strength. What could put the DJIA at risk?

US fiscal troubles could derail domestic economic growth and financial markets as going over the “Fiscal Cliff” would force austerity upon a fragile recovery. And though slower or even negative growth could theoretically harm the appeal of the US currency, recent price action emphasizes that negatives for “risk” are mostly positive for the US Dollar.

US politicians seem no closer to compromise than they were just several months ago, and tax hikes go into effect starting January 1. And though any subsequent deal could retroactively reverse the tax increases, the effects on consumer and market confidence could be significant. The true deadline for a deal will be early-to-mid February when the government is expected to once again hit its self-imposed debt ceiling. There’s no way to know when and if politicians will reach a deal, but the uncertainty will likely weigh on markets and could favor the safe-haven US currency. That is—of course—assuming that other factors do not derail the US currency.

The US Dollar remains haunted by the US Federal Reserve’s Quantitative Easing, and the promise of indefinite asset purchases is undoubtedly part of the reason the USD finished the year near its lows versus the Euro and other counterparts. Yet how long can these policies fuel further dollar weakness?

US Treasury Yields have actually risen since the Fed announced its most recent QE measures, and this has in turn boosted the US Dollar versus the highly interest rate-sensitive Japanese Yen.

US Dollar/Japanese Yen versus US 10-Year Treasury Yield 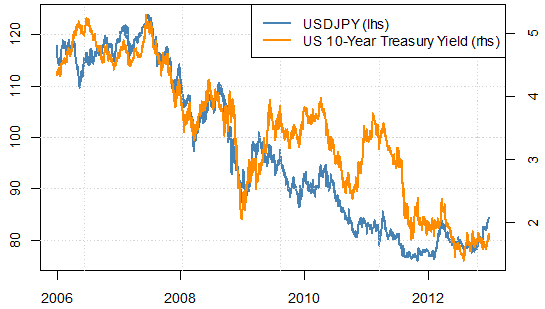 Such moves arguably reflect expectations that Fed policy may not be enough to keep long-term interest rates down, and that in fact may boost the US Dollar against the Yen and other interest rate-sensitive currencies. Explicit inflation and unemployment benchmarks will leave the US currency as responsive to future Consumer Price Index and Nonfarm Payrolls Reports as ever.

Expect the US currency to respond to any significant surprises in the first quarter—whether from traditional economic data or dysfunction in fiscal policy.

Technicals Say 10,071 is a Critical Level for Dollar Progress 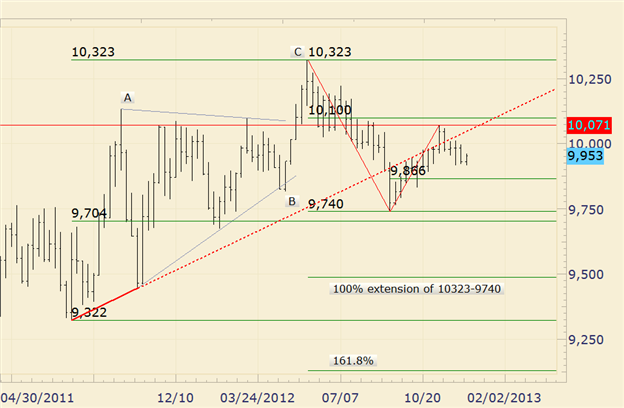 The grand structure is little changed in the USDOLLAR since the last quarterly update. The rally from 9322 is probably (still) a completed 3 wave correction with wave B composing a triangle. The decline from 10323 may serve as wave 1 or A of the next bearish cycle. Interestingly, the 2 most recent reversals materialized just before the 61.8% retracements of the prior move (9740 compared to 9704 and 10071 compared to 10100). The latest high at 10071 is extremely well defended by the October 2011 to March 2012 highs and underside of former trendline support.