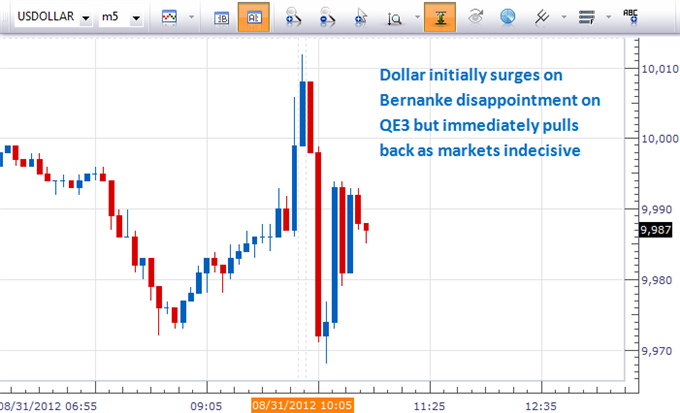 Fed Chairman Ben Bernanke initially sent the US Dollar (ticker: USDOLLAR) sharply higher and the US S&P 500 notably lower as he failed to provide clear indication that the Fed would institute the next wave of Quantitative Easing (QE3).

Those gains were nonetheless quickly erased as markets remained incredibly indecisive, and many ultimately questioned whether the failure to specifically announce QE3 was enough to force a sustained Dollar move.

Yet interest rate futures critically show evidence that the USD stands to recover as rhetoric is not enough to force a substantive shift in US rate expectations.

Dollar Sheds Post-Bernanke Gains, but Pullback May be Misleading

Bernanke critically said that the central bank “wouldn’t rule out further asset purchases” as stagnation in the US labor market remains a “grave concern”. Clearly this suggests that QE3 remains firmly on the table—a US Dollar negative. Yet his words added little to recent Fed rhetoric which made clear that officials kept all options on the table. 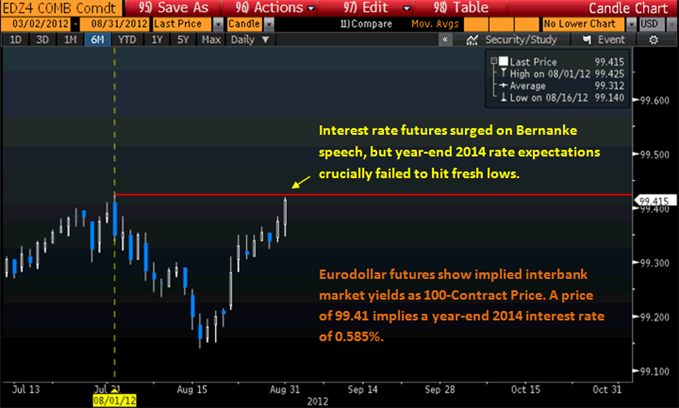 The US Dollar stands to lose if the Fed does indeed institute QE3 as interest rates would remain lower for a longer period of time, but the fact remains that the Greenback has already tumbled on those same Fed expectations. In our opinion, it would take a material downgrade in Dollar yield expectations to force the USD substantively lower.

This is especially true as the US Federal Reserve remains in “wait and see” mode—keeping a close eye on domestic economic data.

The month of September looms large as a highly-anticipated US Nonfarm Payrolls report will shed further light on the state of the domestic labor market. Given the Fed’s clear focus on job creation, any significant disappointment in August Nonfarm Payrolls data could send the US Dollar sharply lower on expectations of further Federal Reserve Quantitative Easing.

But until we see that substantive downgrade, we expect that the safe-haven US Dollar may prove surprisingly resilient in the face of significant risks to the global economy. September may ultimately be a make-or-break month for the US currency and broader financial markets.