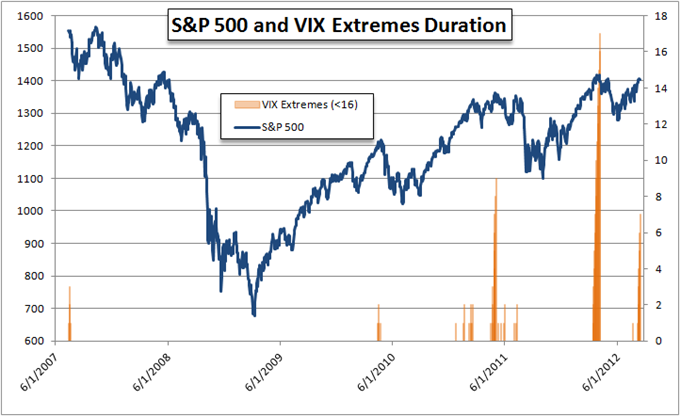 Why the Next Real AUDUSD and Equities Trend is Bearish: Visualization

Volume and volatility have been easing back in the capital and FX markets for some time now, but it is only since the beginning of August that they have cooled to ‘extreme’ lows. It is easy enough to attribute the sluggish markets to the ‘summer doldrums’; but the trends behind economic activity, rates of return and the presence of financial uncertainties suggest the quiet period is transitory and risk premium is undervalued.

In this report, we’ll look at a few non-standard measures of market activity (or ‘fear’) and what the outlook for the next big sentiment-based move will be heading forward.

When measuring the level of activity or risk in the capital and/or FX market, two of the most common measures are the respective asset class’ volatility index (the VIX for equities and CVIX for currencies) and volume readings. Both can be measures of fear as well as conviction. For example, an extreme low in volatility suggests that the market don’t see a high risk of extreme change in prices (uncertainty is often equated to risk), while high level of volume alongside a decline in price reflects heavy selling.

Since the FX market is decentralized and therefore no reliable measure of volume, we’ll focus on volatility. Furthermore, rather than reflecting on the lowest levels in the VIX and CVIX since mid-2007 (which is currently the case), we’ll look at the duration of the volatility measures holding at their extremes. 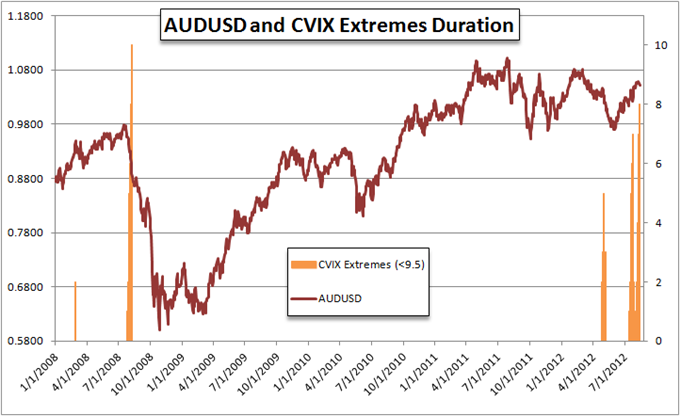 A similar situation can be seen in the FX version of the Volatility Index. For consecutive days below 10 percent, the count is above 30 (the longest period in over five years by far). However, if we move the benchmark for the extreme down to 9.5 percent, we are at 8 consecutive days. The last time we’ve held this low is back on August 7, 2008. Taking it even further, number of consecutive days below 9.0 percent yields a current count of 7 consecutive days. Before this instance, we have only had a few periods (over the past three months) that we have dipped below that level in the past five years.

These are extremes in volatility for a reason – because they do not last. The longer activity levels are at extremes, the more likely it is to revert to a normal level of activity. That said, even if we do see a temporary rebound in volatility and volume, it does not have to generate a lasting trend of building turnover. That has been more than apparent this year.

Yet, against a very poor fundamental backdrop – which we are currently facing – it is more likely that a tentative turn in activity can build upon itself. One reason that this is more likely now than in the recent past is that a return in volatility is more likely to be associated to risk aversion – and fear catalyzes itself.

One more measure of support that activity levels are likely to rebound can be seen in the graph below. Here we have both the VIX Volatility Index and the volume reading for the S&P 500 Index. Whether it is a rebound in volatility that stirs volume or vice versa, the correlation is clear. What makes the presence circumstances more unique than what we see in this limited look-back period is that this is the lowest non-holiday volume reading since before the Great Recession and financial crisis. 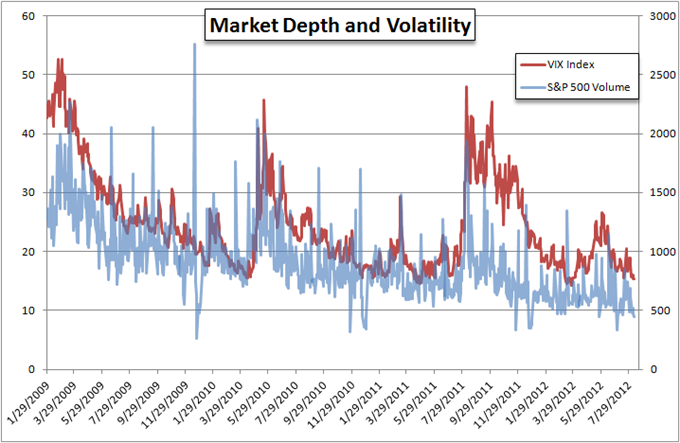 With the knowledge that activity levels are at extremes and more likely to revert with each day that passes; it is worth establishing the likely direction that results from that rebound in activity.

We’ve discussed the fundamental backdrop that clearly contradicts the ‘low risk’ reading we see in volatility measures. Yet, we can look at something more quantifiable for guidance. In the chart below, we can see that VIX volatility index has an extraordinary, negative correlation to equities (the volatility read is inverted to visualize the level of relation). So, while we cannot claim a level of extreme on the S&P 500 on a historical basis (there are higher highs), we can see that the level of risk is. And, when risk levels return to normal, we’ll likely see the S&P 500 suffer for it. 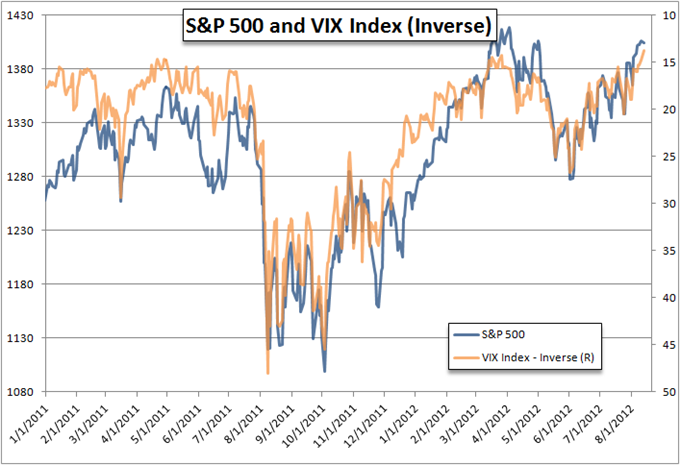 A similar relationship is seen between the AUDUSD and FX-version of the VIX. This relationship works well between most currency pair’s with a meaningful ‘risk’ connection, but AUDUSD certainly stands out in the crowd. 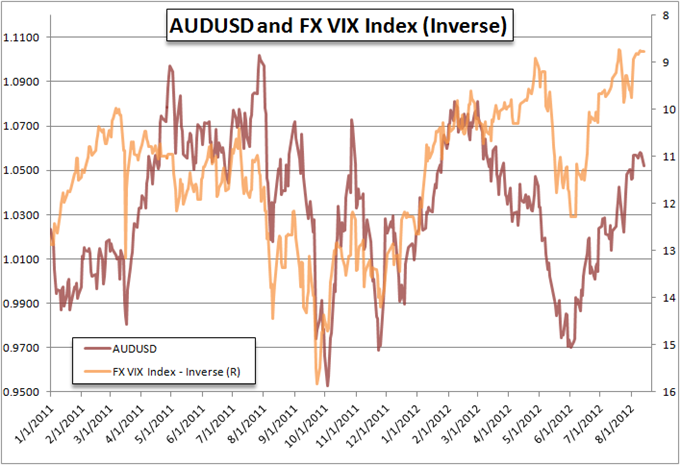 The last consideration as to reviving volatility and the direction that comes with the pickup in activity is the ‘when’. For that, we can look to the known event risk over the coming month.

In the calendar’s below, we can see what is scheduled for release that can viably tap into underlying risk appetite trends. Perhaps the greatest hindrance to a straightforward risk aversion reaction to a recovery in volatility and volume measures is the imposition of another round of stimulus. With stimulus, we can have a short and unexpected surge in asset prices as an unexpected buyer enters the market. However, as we can see below, the likely opportunities for more stimulus (even name in red) are further off. Of course, this could suggest that we have weeks of extremely quiet markets – but that is a long time to see extremes.

Furthermore, stimulus efforts would be aimed at keeping perceived risks low (which they are already are), boosting capital markets (the S&P 500 is already near a four year high) and its encouraging growth. The problem is that previous efforts have offered limited return and the markets have shown a diminished confidence with each program. While there may be a stimulus program in the near future that attempts to keep markets buoyant, the risk continues to build that sentiment will eventually collapse under its own weight. 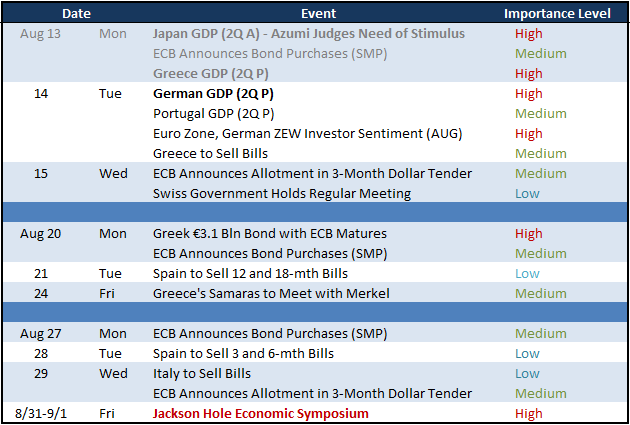 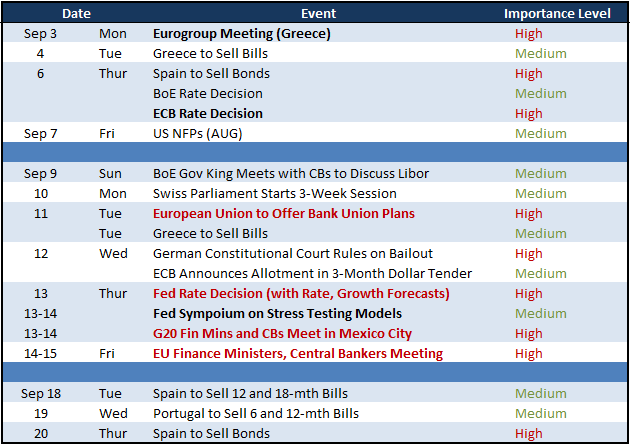