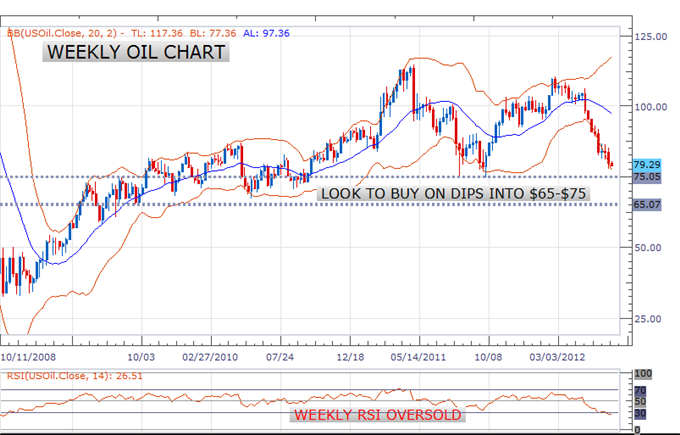 “Black Gold,” or Crude Oil, has lost some of its luster. After opening the 2Q a few ticks shy of $105.00/brl, the world’s most hotly sought after commodity finished the year just under $85.00/brl. If not for a massive rally on the last day of June, it would have finished the quarter down over 27 percent from its high and under $77.50/brl.

Global Growth Issues Weigh; What Next?

Crude Oil, like the base metal commodities like aluminum and copper, has historically served as a gauge of expected global growth; these commodities are the necessary building blocks of modern economies. But Q2 was not a strong quarter for growth prospects: the US economy experienced slower job growth; the Euro-zone economy slid towards a recession with much of the periphery experiencing increasingly negative growth; and disappointing growth prospects out of China. Regardless of whatever else is happening globally, a slowing global growth picture has to be the number one factor influencing oil going forward.

Looking ahead, growth concerns are unlikely to subside. The US economy is getting awfully close to its ‘fiscal cliff’ while the Federal Reserve has withheld monetary stimulus. It appears that an uncertain investment horizon will mean large corporations and small businesses alike will maintain a more fiscally conservative bias – and thus avoid hiring if possible.

These dynamics lead us to believe that the US economy will remain on softer ground. In Europe, but for Germany, the rest of the continent is already in or headed to a recession. The fundamental issue behind the “austerity versus growth” argument is that austerity hurts an economy more when the government has a greater involvement in the economy; contracted government spending will crush much of Southern Europe.

Will Quantitative Easing Be Announced? We Think So; Just Not Yet

Ultimately, the Euro-zone crisis and global growth concerns will spillover to the point that central banks will need to act. Largely, this is due to ineffective fiscal policy being implemented around the globe, by choice (as in the case of the US) or by inability (as in the case of the Euro-zone). So when markets start to collapse as liquidity dries up, the Federal Reserve and the European Central Bank will be forced to step into the markets.

With the recent Euro-zone Summit offering up another feeble effort to help stem the crisis, Crude Oil looks bullishly postured in the very short-term. However, it is fair to say that it’s unknown how long the calm could last; either a few days or a few weeks. With a growth compact in place, Crude Oil surged nearly 10 percent on the last day of Q2—suggesting that market participants are optimistic going forward. Either way – slowing growth leading to a major recession or a crash – will eventually provoke a major liquidity injection.

This is a market that has been under some intense pressure for the majority of the second quarter, with the price action resulting in some stretched medium-term technical studies. At this point however, the market is expected to find some formidable support between $65-75 and as such, our recommendation would be to look to take advantage of the stretched studies and build into a long position on a decline into the above mentioned range.

There is some very good former resistance turned support from 2010 in the $65-75 area. Ultimately, only a 2-week close back under $65 would negate our more constructive third quarter outlook and give reason for pause. Look for a push back towards $100 at some point over the coming months. At that point, we recommend booking profits on any rallies beyond $100 and standing aside.