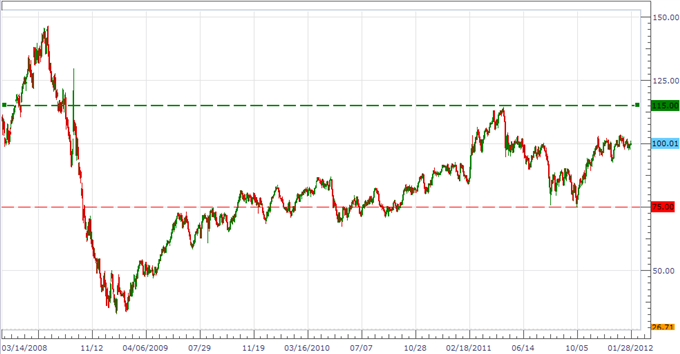 At the start of 2012, we expect crude prices to remain supported due to supply risks and rising expectations for economic growth. As the first half of the year drags on, however, we expect to see prices decline as the world economy slows down. We expect by the middle of 2012 to see crude oil (WTI) test $80, and perhaps even test long-term support at $75.

Growing tension amongst world policy makers has raised the risk of seeing elevated oil prices as an increasing number of countries implement trade sanctions against Iran - one of the top five oil producers in the world. Should fears of a supply side shock materialize, a panic could spur another test of $115 as the major consumers of crude are forced to tap their reserves. At the same time, the more robust recovery in the U.S. – the largest consumer of oil - has spurred speculation for greater demand. In turn, the short-term squeeze on supply along with projections for greater demand may establish a short-term floor around $100. However, the downside risks facing the industrialized countries should set the stage for lower prices in the coming months.

Looking ahead a few months, the outlook for economic growth is important. The International Monetary Fund has called for lower growth in 2012, curbing its projection for the world economy to 3.3% from an initial forecast of 4.1%. In addition, the IMF called for a slower rate of growth in the emerging and developing economies, and went onto say that the sovereign debt crisis remains a leading concern for the group amid the heightening risk for contagion. The World Bank also lowered its global growth forecast to 2.5% from the 3.6% prediction released back in June, while noting a “slow” rate of growth for developing countries. The weakening outlook held by the two groups encourages a bearish forecast for oil, as slower growth should crimp demand for energy. Indeed, the bank sees oil prices averaging $98 in 2012 in light of “slowing global demand, growing supply, efficiency improvements, and substitution away from oil.”

Will The Slowdown In Global Growth Accelerate?

The major fundamental themes carried over from 2011 – the Eruopean debt crisis, slowdown in China, and sluggish US employment growth – dampen the outlook for oil. While a rise in business activity in the United States has helped to boost economic recovery there, households have scaled back on consumption. We may see an even more pronounced slowdown in retail spending as the stickiness in inflation saps purchasing power for households. As a result, we should see crude give back the advanced from the end of the previous year based on slackening demand and continually falling growth expectations. This would pave the way for a potential test of $80 in the next six months. Should the global landscape deteriorate even further, a marked slowdown in the global economy will threaten support around $75, which could open the door for a dip in crudes down to as low as $70.

This is a market that has been trading by some real extremes over the past few years, with the price rallying to record highs by $147 in 2008 before reversing sharply to trade down towards $32 by the end of the year. Since then we have seen a gradual recovery, with the price reverting back to some form of a mean in the $100 area. From here however, it becomes quite difficult to forecast direction in this market over the course of H1 2012, with a break of the shorter-term high or low required for clearer directional bias. The key levels to watch above and below are $115 and $75. A break on either end will open the door for the next key extension. However, given the fact that this market has been in recovery mode since 2009, the risks seems to be favoring a move back towards the $115 area in the first half of 2012. Back under $92 would negate and open a drop back towards $75.