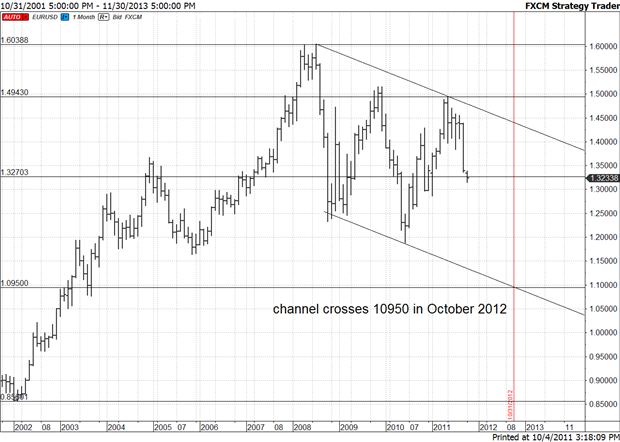 Big Banks Call for Euro Gains, but We Predict Tumbles - Who's Right?

Current 12-month forecasts for EUR/USD across banks and retail FX brokers span a wide range (full list of forecasts can be found at the end of this article) and there is an interesting dichotomy in the forecasts. Large banks are mostly bullish on the EUR/USD from current levels, with their forecasts clustering in the 1.40 region. Meanwhile, retail forex brokers are quite bearish, all making calls below 1.25. FXCM is particularly bearish, calling for an exchange rate of 1.00 (Euro/US Dollar parity) in 12 months’ time. A 30 percent decline in 12 months is an extreme move, but wouldn’t be a shock given the wild swings that capital markets have endured in the last four years.

So why would our forecasts differ so widely from major banks? For starters, large institutional research desks tend to build things by consensus and over longer stretches of time. Whereas a major bank’s FX desk may have made its 1-year Euro/US Dollar exchange rate forecast months in advance, brokers such as FXCM’s own DailyFX Research team tend to be much smaller and are able to switch gears much more quickly based on new information.

The EUR/USD is a perfect example for why it is often critical to react and move with shifts in market dynamics and adjust currency forecasts accordingly. The Euro has taken a beating the past few weeks. From late August through early October, the EUR/USD has traded 1200-pips to the downside as the Euro-zone’s sovereign debt concerns reemerged as the primary driver behind swings in market sentiment.

Despite the fact that European officials have worked to soothe investor confidence for months, little progress has been mad. Failure to enact any significant, specific plan has eroded faith in promises set about to contain the sovereign debt crisis.

Just several months ago the Euro-zone debt crises looked far more contained. On July 21 the so-called troika of the European Commission, European Central Bank, and International Monetary Fund announced a significant expansion of the European Fiscal Stability Fund and fresh fiscal aid for Greece. In the new package, private bondholders would have to agree to a 21 percent ‘haircut’—or voluntary loss—on Greek debt positions. Analysts now believe that this is far from sufficient; estimates now suggest that the haircut must be on the order of a 50-60 percent to truly make a difference.

Calls for Euro strength subsequently seem short-sighted, and indeed we at DailyFX believe further losses are likely. A push towards parity may not be as extreme as once thought. A slower global economy leaves at-risk governments in the Euro-zone in danger as tax revenues drop, and European sovereign debt crises look poised to worsen over the next year.

Technically, a bearish channel may be forming from the 1.6000 top. The channel crosses 1.0950 in October 2012, so 1.1000 is probably a more realistic 12 month target for those that are bearish. Markets do tend to overshoot targets in volatile markets, and a break below the 2010 low (1.1875) would more than likely be accompanied by high volatility.

Overall it seems as though the slower-moving research desks from top banks have maintained their Euro-bullish forecasts despite clear fundamental and technical risks. We at DailyFX, research arm for FXCM Inc, believe that there is enough new information to drive the Euro towards parity against the US Dollar in a year’s time.