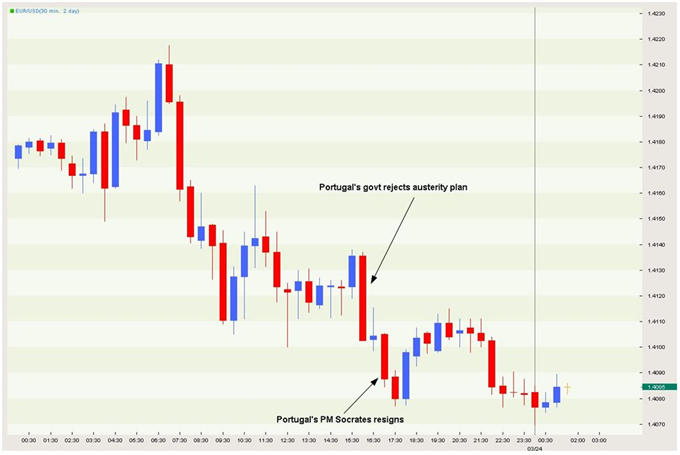 The Portuguese prime minster resigned late on Wednesday after Parliament rejected his plan to impose further austerity measures to tackle the debt burden. Prime Minister Jose Socrates said that he couldn’t govern without support and handed in his resignation shortly after the vote in parliament, saying “today, I am convinced the country is lost”. Socrates has agreed to head a caretaker government until a new one can be formed.

All opposition parties voted against the proposed spending cuts and tax hikes that were aimed at avoiding an EU bailout. The plan came with the support of the EU, but Socrates was unable to convince the main opposition, the Social Democratic Party, to support the plan. The Portuguese government pushed through other austerity measures in 2010, the new plan included reforms aimed at labour, social benefits, capital expenditure, health-care sector and state-owned businesses.

The rejection of further cuts by the opposition and subsequent collapse of the government is likely to increase pressure on Portugal to seek a bailout from the EU (and potentially IMF) to the tune of tens of billions of euros to help the distressed nation meet its debt obligations. Greece and Ireland have already been forced to take bailouts to help them contain debt crises in the wake of the global recession.

Socrates will still attend the EU summit in Brussels scheduled to start later today and continue into Friday where leaders hope to reach an agreement on a plan to increase the coordination of economic policy across the euro-region while expanding the size of the region’s bailout apparatus. Socrates had planned to take the new plan to the summit as a sign that the country has its financial house in order. In the aftermath of the failure to pass the measures Socrates' ability to negotiate details of any potential bailout for Portugal will be severely restricted because of his caretaker status.

The vote on Wednesday in the Portuguese parliament highlights a large flaw as Europe tries to tackle its growing debt crisis. The flaw is that there is no incentive for countries with heavy debt loads to take further debt-slashing steps if not bailed out. After the international bond market has driven yields sky-high, essentially driving Portugal into the arms of the EU and IMF, the question begs why should Portugal hike taxes or cut spending at this point. Portugal, by local standards, hasn’t acted as badly as Greece and Ireland (playing financial games for the former and an unregulated banking sector for the latter) but simply hasn’t grown at a fast enough pace to keep up support for its bountiful safety net. There is another, more worrying concern, how exactly these countries are meant to escape this catch-22, since the very austerity measures being demanded of them are worsening, not improving, their fiscal situation. On a quarter-by-quarter basis, Greece’s economy contracted 1.4% in Q4, Portugal’s dropped 0.3% and Spain’s only managed a modest 0.2% rise (Ireland’s Q4 data is still unreleased).

Portuguese markets were under pressure all day as the vote’s final outcome already looked increasingly likely throughout the day. The euro, which was weak most of the day, fell further after the results of the vote were announced. Portugal’s PSI-20 index fell 1% on Wednesday with selling hitting all sectors. Consequently, spread between Portuguese and German bonds has widened.