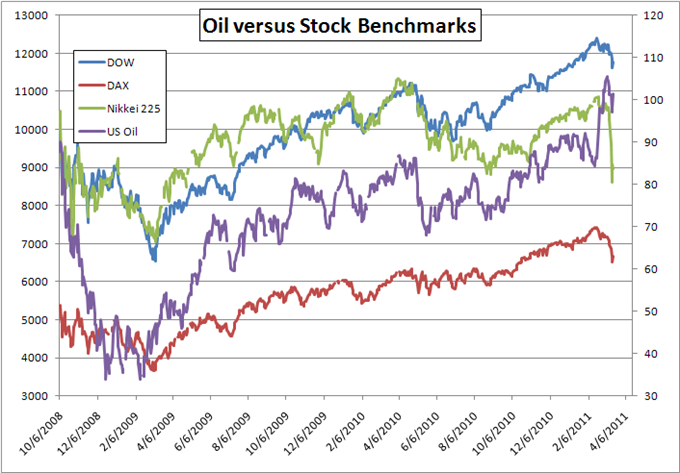 It is difficult to forecast where oil prices will be six months from now; because the market is currently wading through many unique events. Among the most influential drivers so far this year are the instability in the Middle East and North Africa, the early spike in underlying risk apetite trends, and the steady rise in global economic growth. Any one of these prominent drivers could take the market’s reins; and few of them currently have a clear bearing. That said, when projecting the trading conditions for any market, direction is complemented by the level of activity. A low level of volatility translates into a quiet and difficult to trade market. What we are looking at in oil right now is shifting episodes of direction backed by a consistent swell in volatility.

The outlook for oil can be distilled down to risk versus reward. For this particular commodity, the supply-and-demand balance is vital.

We will start with the demand side. Energy is needed when an economy (for our purposes, the global economy) is expanding. While there have been significant hurdles to strong expansion in industrialized economies (including deficits, financial crises and inflation); the global economy has nonetheless shown a consistent trend of restrained expansion on the back of strong growth in large emerging economies, such as China, India, and Brazil.

When it comes to demand, the entire world has some level of demand for oil. However, the health of the industrialized economies is a good gauge for future oil consumption. At the top of the list is the world's largest oil consumer, the United States. The US posted a 2.8 percent annualized rate of growth through the end of 2010. This brings the US economy close to the rate of growth seen before the financial crisis of 2008/2009. The Chinese economy grew by 9.8 percent while European Union level growth topped 2.0 percent. In fact, the OECD (The Organization for Economic Co-Operation and Development) projects that net growth for the advanced economies it tracks will run 2.3 percent. So, while we may have a cooling in pace for different regions; the overall health of the global community should keep demand for oil elevated.

A Supply Shock Akin to the 1970’s Energy Crisis?

Oil prices are as sensitive to supply issues as they are to demand concerns. In the opening quarter of 2011, we have seen output fears reach levels not seen since the energy crisis of the 1970’s. Once again, the source of these supply concerns is the Middle East. Starting with a democratic uprising in Tunisia, unrest has spread to Egypt, Libya, Bahrain and elsewhere. Many of these countries are notable contributors to global energy output; and disruptions in this supply chain will have a direct impact on the oil price.

That said, the greatest threat to supply would be for turmoil to spread to other OPEC members that produce significantly more oil. Bahrain is an important member of the Gulf Cooperation Council – a Middle Eastern economic and political alliance amongst large petroleum producers – that is currently facing democratic protests. Should unrest spread to other GCC members (such as Saudi Arabia), the expected disruption in output coudl cause prices to skyrocket. While there will likely be a concerted effort to quell any conflict, the global markets are very sensitive to threats to otherwise steady supply streams.

While we can condense fundamental analysis of the energy market to supply and demand; expectations and speculation can also have a prominent influence over price action. This is where the greatest potential for volatility lies. To see visually how sensitive oil prices are to changes in investor sentiment, take a look at the graph below. This shows the activity of oil prices (the purple line) against the performance of benchmark equity indexes from the US, Europe and Asia. The correlation is clear. The reasoning behind this relationship, however, may not be.

Though commodities like oil are used for actual production and consumption; the market for these necessary goods can be accessed by speculators as well as consumers. As investors the world over seek higher returns and a diversified portfolio, many have made an effort to incorporate oil into their investments. Also, since stocks typically rise when economic activity is expanding, some investors will buy oil futures at the same time they are buying shares as they expect that economic growth will fuel both a rise in company revenues demand for oil. At the same time, when there is a concerted effort to sell ‘risky’ positions in stocks and other asset classes, it tends to spill over to crude.

The outlook for investor sentiment is far more difficult to pin down than the outlook for basic supply and demand led by economic growth. There is plenty of reason for uncertainty to persist including the ongoing rumblings of financial instability in European governments and the US housing market. The recovery in market stability and economic activity so far has been heavily influenced by government support and stimulus. Yet, this stimulus is inevitably temporary. Eventually, stimulus will be withdrawn; and investors will not have the implicit guarantees of safety. Adding to the complexity of the situation, market participants tend to get into or out of speculative positions well before any actual changes in activity. To get a good bearing on underlying risk appetite and its potential impact on energy prices, we should keep an eye on volatility. The CBOE VIX Index, which is based on volatility in the S&P 500 equities index, recently surged to its highest level in nearly nine months. Meanwhile, the Crude Oil Volatility Index hit similar highs, reflecting expectations for changes to price action, this tells us that the market is likely preparing for large price swings. 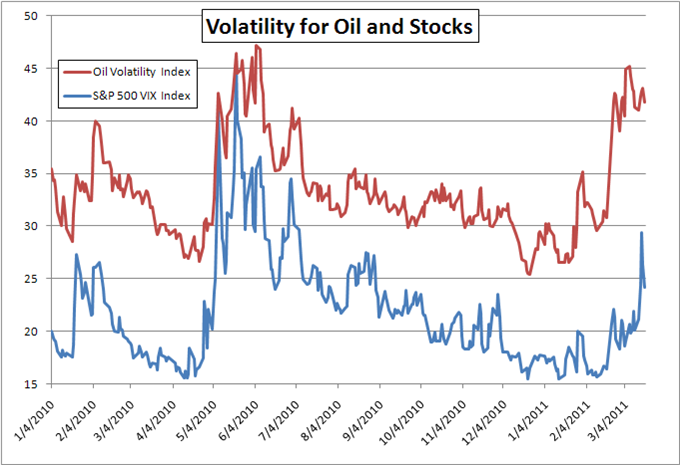 Currently, there are very specific threats to general investor sentiment, as well as oil prices in particular. These ongoing events can quickly change the direction of crude prices; and so we need to be especially attentive to them. The political unrest in the Middle East and North Africa is perhaps the biggest question mark because it directly effects expectations for supply. Other situations we should monitor include the effects of the earthquake in Japan, a rebalancing of investment capital away from emerging markets and the European debt crisis. The most severe earthquake on record for Japan resulted in a tremendous loss of life, structural damage, power outages, lost productivity and perhaps a critical meltdown of a nuclear power plant. This not only holds implications for energy demand from the world's third largest economy; but it also undermines confidence in the smooth operation of its capital markets. The same holds true for EU officials’ efforts to secure confidence in their financial markets. Should the European Union’s position as a safe and benchmark investment area be cast into more serious doubt, the shock to energy markets (and hence, oil prices) could be severe. Finally, there is a concern that has not yet captured the market’s full attention: the fear of capital controls, rate hikes and growth-killing inflation in emerging economies. This will eventually encourage investors to shift funds back to developed markets. This rebalancing will be seen as a reduction in risk taking that will no doubt curb speculation in ‘risky’ oil speculation.

When we are looking to trade changes in oil prices; it is important to consider both our approach and our strategy. We need to keep in mind the correlations that oil prices have with the broader market. As we showed above, crude prices generally move in the same direction as equities over time. This means that if we are both long stocks and long energy; then we are increasing our leverage to a single theme: that growth and sentiment will improve. The concept of diversification rests not just in using different assets; but in further balancing positions so that if a common theme unexpectedly strikes the financial markets, there is not a loss amongst all the assets you hold. As such, a good means to offset some of the speculative risk we take with oil is to trade other assets like currency. For example, as we can see in the graph below, oil prices have a very strong negative correlation to the USD/CAD currency pair. This means that often times when oil is rising, USD/CAD is falling at a very similar pace. So, if we think that supply concerns will hold through the immediate future while demand remains consistent, we can look to buy USD/CAD in order to provide a reasonable counterbalance to your portfolio. 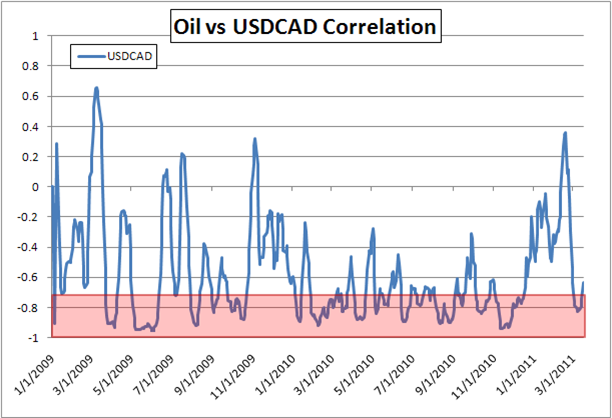 To receive John’s reports via email or to submit questions or comments about an article; email jkicklighter@dailyfx.com