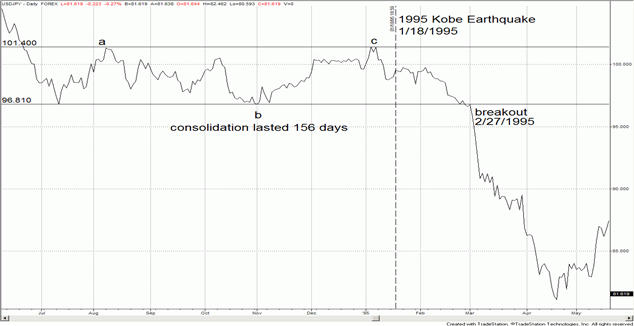 Could the 1995 Kobe Earthquake Give Traders Insight on the Direction of the Yen?

In the immediate hours following the devastating 8.9-magnitude earthquake on Friday, traders rushed in long-Yen positions amid speculation that a repatriation of assets could occur. However, as the dust settles and early calculations are made about the cost of recovery, is Yen strength what Japan needs?

The Yen rose across the board against the other seven major currencies in the hours following the earthquake on speculation that significant investment would be needed to rebuild the devastated country. In fact, the Yen had depreciated 0.80 percent against the U.S. Dollar for the week headed into Friday, but after the natural disasters, gained 1.37 percent against its American counterpart. Investors cited the bull rally that occurred following the 1995 earthquake outside of Kobe, Japan, as a historical point of reference for the reason behind the Yen rally.

Following the 1995 earthquake, the Yen rose to historical highs against the Dollar, dropping below the psychologically significant 80.000 level in the wake of the disaster. The Nikkei fell 6.18 percent today following 1.70 percent losses on Friday, after a weekend of assessment left traders disparaged. In the next six months, the Nikkei fell another 24.7 percent; in the following ten months, the Nikkei jumped 52.2 percent. 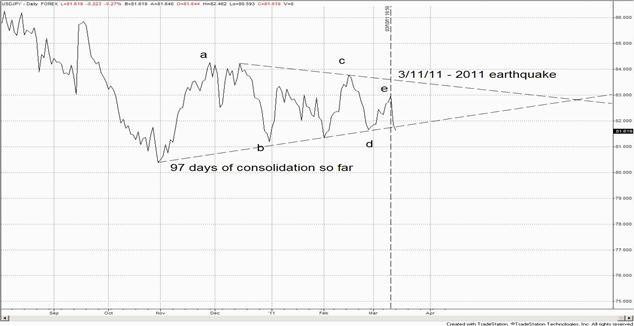 However, the Japanese economy is in a significantly different place today than where it was in 1995. Primarily, the Bank of Japan recognizes that a stronger yen will significantly a recovery from the financial crisis that is still struggling to find footing. A weaker Yen would be beneficial: strong exports and foreign direct investment would aid the rebuilding process as well as speed up the recovery from the recession. The Bank of Japan, in a move that clearly exhibits their belief that the funding needed to rebuild is enormous, it injected ¥15 trillion, or $184 billion, into Japanese capital markets, and expanded its asset-purchase program to ¥40 trillion. This may not be the last of such moves: the Yen is up 14 percent against the Greenback over the past 12-months, which has reduced exporters’ profits margins significantly already. Thus, while the Yen gained over 20 percent against the U.S. Dollar in the wake of the 1995 Kobe earthquake, further liquidity injections to weigh down the Yen might make a similar breakout unlikely.