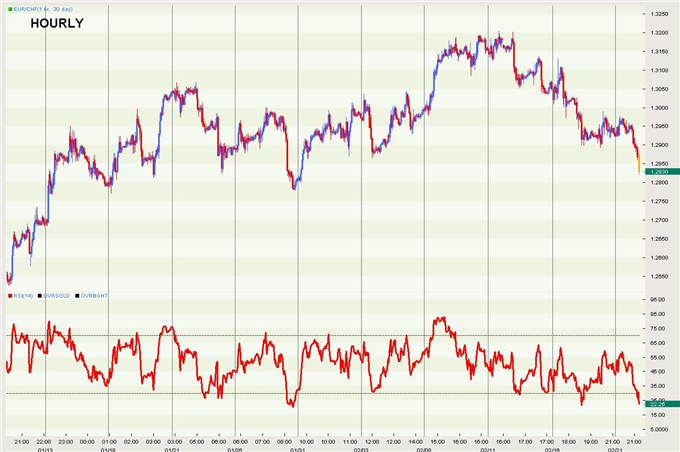 Fundamental: Any time we see risk aversion it is always expected that this cross will come under pressure, and the elevated geopolitical risks have certainly been playing their part, with oil prices skyrocketing on heightened tensions in North Africa and the Middle East. Most recently, two Libyan planes landed in Malta in an effort to defect rather than follow orders to bomb protestors, while the Libyan ambassador to India has resigned and called for the UN to act to protect the Libyan people. Moreover, Libya’s mission to the UN has abandoned the regime and is calling for an international intervention to stop the genocide. Of course, the Iranians are taking full advantage of the chaos with wires reporting 2 Iranian war ships entering the Suez Canal and heading towards the Mediterranean. On top of the general selling from the safe-haven exodus, European banks are also reported to have fairly decent exposure to the Middle East and North Africa, which adds to the downside pressures.

Additionally, there have been some other Eurozone specific factors that have been weighing on the Euro, with the larger than expected defeat of German PM Merkel in the state election fueling speculation that any positive consensus on sovereign debt will erode. Any change in sentiment towards policy which shifts to a focus on a broader national fiscal adjustment rather than on simply eliminating the tail risk, specifically from the beleaguered Eurozone economies, acts as a major weight on the Euro and opens the door for additional downside risks to the currency. The latest article from Weber which outlines a call for a more nationalized fiscal adjustment could therefore make waves if this now becomes the majority opinion in Germany.

Still, we expect that many of these fears and concerns will soon be dismissed and market appetite will once again find its footing. We have seen the markets initially panic on geopolitical threats in recent days before eventually downplaying these risks and once again buying back into risk, and we see things playing out in a similar manner on Tuesday once the dust settles. Additionally, any downside pressures in the Euro on the back of this latest Weber article have now been priced in and we see risks for the Swissie to play a bit of catch-up (perhaps “catch-down” is the more appropriate description) in this latest bout of broad based currency weakness and USD strength.

Technical: This market has also come under some intense pressure on Tuesday with the latest sharp drop resulting in heavily oversold hourly studies and a market that has already met its daily average true range. However, with medium-term studies looking more constructive and showing the formation of a potential major base by record lows at 1.2400 from late 2010, we like the idea of buying into this dip from 1.3200 in anticipation of a higher platform somewhere in the mid-1.2700’s to lower 1.2800’s. POSITION: LONG @1.2830 FOR AN OPEN OBJECTIVE; STOP 1.2680.

Fundamental: The New Zealand Dollar has been absolutely crushed over the past several hours with a combination of a devastating local earthquake and a broader rise in global risk aversion contributing to the local currency’s demise. We had already been warning of the threat of a slowdown and relative weakness to the antipodean currencies as China began to tighten monetary policy, and local data showed signs of softening, and this latest quake should only exacerbate the situation. Rising geopolitical tensions in North Africa and the Middle East have also been resulting in a liquidation of higher yielding currency trades and in the end, interest rate differentials should continue to narrow in favor of other currencies going forward. Signs of stabilization in risk sentiment and an improved assessment of the damage in Christchurch would now be required to alleviate intensified downside pressures. 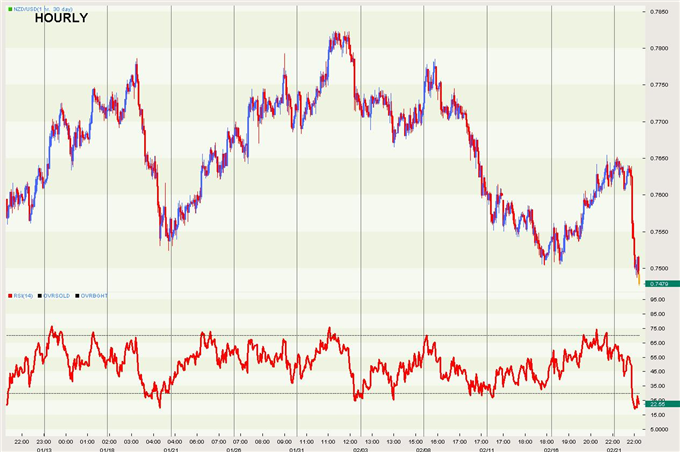 Technical: At this point, hourly studies are certainly well oversold, with the market down over 2% on the day. This could warn of a potential consolidation for the remainder of the day, but daily studies still show plenty of room to run, and the break back below 0.7500 opens the door for a fresh downside extension over the coming sessions towards next key support by 0.7340. As such, while hourly studies are looking exhausted, the preferred strategy would be to sell into a rally rather than looking to fade this latest weakness.

IF you wish to receive Joel’s reports in a more timely fashion, email jskruger@dailyfx.com and you will be added to the distribution list.