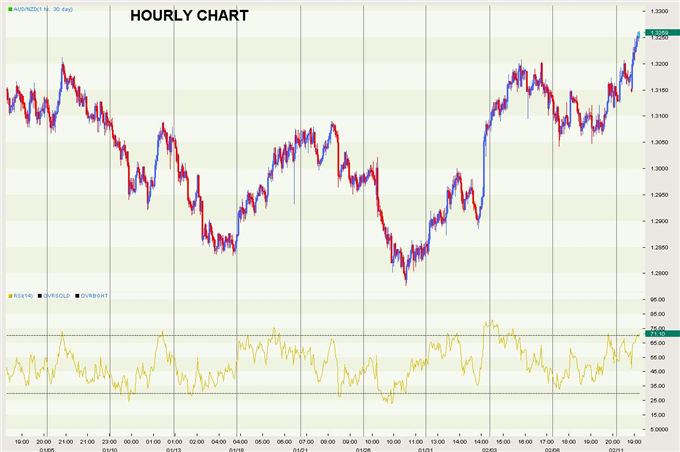 Aussie Cross Rate and Dollar/Cad Show Up On Radar; Will Look to Exploit

Fundamental: A combination of stronger Aussie housing finance data and softer New Zealand retail sales have opened the door for the latest topside acceleration in the cross. However, we would not pay too much attention to the stronger Aussie data and warn that an overall softening in economic data out of Australia over the past few months, more balanced RBA monetary policy, devastation from the Aussie floods, and the threat of a slowdown in China on the back of tighter PBOC policy, will all prove to be too tough to ignore over the coming weeks, with the Australian Dollar seen more at risk than its antipodean cousin. It seems as most of the larger institutional bets over the past several years have been built on long Aussie positions and once these players decide to book profits, the Australian Dollar could fall hard and fast.

Technical: Although this market is not showing overbought on the daily chart just yet, we feel it is well worth watching over the coming days as it looks as though it could soon officially break into overbought territory on the daily. In fact, hourly studies are now quite overextended and we see a very good possibility that any additional moves into the 1.3350 area will be met with some very solid sell interest. The 1.3350 area coincides with the 78.6% fib retrace off of the major Dec-Jan high-low move, and should act as a formidable resistance point.

Fundamental: The Canadian Dollar was the strongest currency in Friday trade, with the currency standing out on the back of some very impressive Canada December trade data. Trade merchandise showed a C$3.0B surplus, the highest since October 2008, with exports rising sharply by 9.7%. However, it is worth noting that energy products accounted for more than half of the growth and given what we believe to be a slightly overvalued commodity market, any pullback in oil prices over the medium-term should weigh more heavily on the correlated Canadian Dollar. In fact, oil prices were sold quite heavily on Friday on geopolitical risk relief in Egypt, and we contend that the Loonie has yet to appropriately react to this latest drop in the oil market. Additionally, the US Dollar has been attempting to mount some form of a broader comeback and any continuation of this trend will ultimately weigh on the Canadian Dollar. 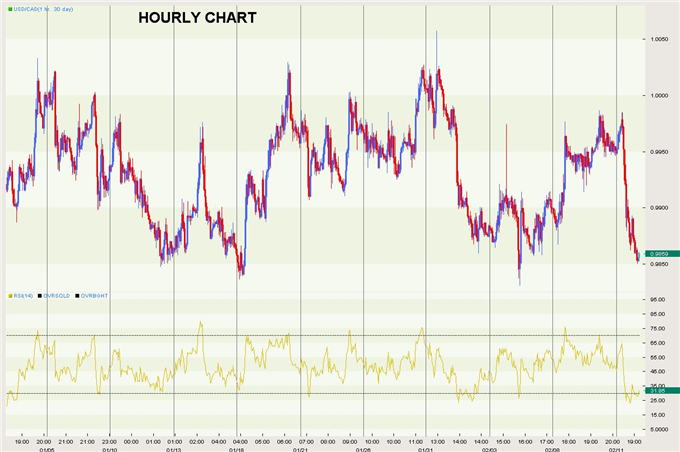 Technical: Just like AUD/NZD, this market is also not showing overextended on the daily charts just yet, but is starting to look stretched with hourly studies confirming. On a longer-term basis, the market trades just off of historic lows and trades, in our opinion, by cycle lows. While we would not rule out the potential for additional short-term declines from current levels, longer-term risk/reward prospects are more in favor of significant upside over the coming months. As such, we like the idea of looking to buy into overextended intraday moves, with any setbacks below 0.9800 viewed as an attractive and playable contra move.

IF you wish to receive Joel’s reports in a more timely fashion, email instructor@dailyfx.com and you will be added to the distribution list.