Additionally, the EU life line worth almost $1 trillion did almost nothing to calm conjecture against a possible collapse of the fixed exchange rate system as investors speculate that the plan may not be enough to prevent the negative spillover effects onto other European countries. In turn, there was some threat that foreign financing for some European countries such as Portugal, Spain, Greece, and Ireland would come to a halt as investors sent the yield of government bonds through the roof.  One reason why market participants have little faith in the rescue package is due to the fact that there are many details that are still missing. A second rationale, as ECB’S Stark said in a recent German ZDF television interview, the EU rescue package simply wins time, it doesn’t solve problems.

Taking a look at the first issue, it is not clear on whether the pool will raise capital in anticipation of funding an emergency or only when it is needed as the case with Greece which taped into emergency loans from the euro region yesterday to repay 8.5 billion euros ($10.5 billion) of 10-year notes, which threatened the euro-region’s first default.  At the same time, the interest rate at which countries who access the funds have not been fully disclosed, and nor has the IMF announced its full contribution. The latter distress focuses on what will these sovereign countries do with the time allocated to them by the EU package. Thus far, countries have been dilatory in slashing their budget deficits, and fiscal obedience will be a difficult obstacle to tackle going forward as enforcers might fret about being punished one day.

What are policy makers doing to prevent the Lehman like effect? Other than the loan package worth €750 billion ($962 billion), Germany recently announced a ban on so called naked short selling (which was cited as one of the major factors preceding the financial crisis)  of euro zone government debt as European officials attempt to avoid the crisis from deepening further. Meanwhile, the U.S. Federal Reserve restarted its emergency-swap tool by providing as many dollars as needed to the ECB in order to keep the sovereign-debt crisis from spreading.

Nonetheless, European policy makers are left with the issue of how to tackle fiscal discipline as strong financial links between 16 – member counties mean that any punishment would undermine the currency zone’s stability. Looking ahead, risk aversion is likely to take the lead as the European debt crisis lingers; thus, sending higher yielding currencies to push lower against the greenback.

The yield on Greek 10 year notes have soared 291 basis points in the past six months, and have climbed 46 points in the past five days alone, making Greece’s borrowing costs more expensive.  At the same time Portuguese bonds have also been coming under pressure as market participants are concerned about public finances. If tough austerity measures are not successfully implemented, we may see a new round of civil unrest.

Credit default swaps on 10 year government bonds for “PIGS” recently reversed its southern journey as European debt woes remain. Indeed, insurance against highly indebted countries in Western Europe is gaining momentum as market participants bet that Greece and its neighbors are heading towards default. Furthermore, Italy’s and Greece’s debt to GDP of approximately 115% in 2009 are additional concerns for investors as the countries bad debt will now have to be restructured. Comparatively to the U.S. where bad debt is in the private sector, for the Europeans, bad debt is in the public sector, and the nearly $1 trillion life line calls for passing on this debt onto the taxpayers of solvent states. One of the main problems with Europe is that peripheral states cannot keep up with the interest on the money that they borrow.

The 21-day correlation between the EURUSD and the MSCI World Stock Index now stands at 0.93, a signal EU crisis is still driving risk aversion. 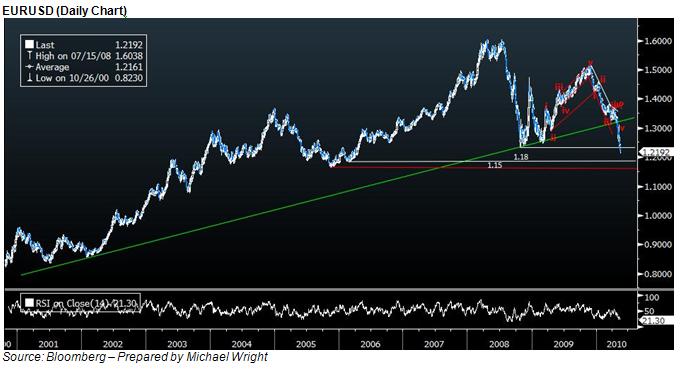 The euro looks to continue its southern journey against the buck that began earlier this year amid the media frenzy surrounding the brewing sovereign debt crisis in Europe. From a technical aspect, the pair has broken below an eight year trend which I noted early this month (Euro Remains under Pressure Ahead of ECB Rate Decision) when the euro was trading at 1.2885 versus the U.S. dollar. Since then, it has accelerated to the downside and it looks apparent that we may see the EUR fall further. However, investors should not rule out a short term bounce to the upside as daily studies now indicate that move is overdone. Nonetheless, market participants ought to not discount a period of consolidation before we see further declines.


Written by Michael Wright, Currency Analyst
What do you think about this report? Email me at instructor@dailyfx.com