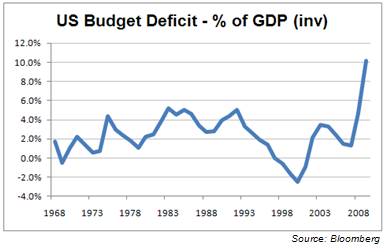 US Budget Deficit: Filling the Hole

The US government budget deficit reached an astronomical 10.2 percent of the economy’s total output last year, the largest shortfall on record in over four decades. To put this context, the average deficit over the same period is 2.5 percent, and excluding the stimulus-heavy years of 2008 and 2009 yields an even smaller 2.2 percent. A survey of economists conducted by Bloomberg predicts the gap will amount to 9.2 and 7.3 percent of GDP this year and in 2011 respectively, down from the double digits but still very high by historical standards.

Filling a hole of such tremendous size will not be done through spending cuts and tax increases alone. Indeed, much of the shortfall is sure to be financed with borrowing, amounting to the massive issuance and sale of new US Treasury Bonds. A flood of new securities on the market can be expected to drive bond prices lower, which in turn sends the yields on those bonds higher. Given the size of the deficit, the increase in yields created by this process promises to be of tremendous proportions.

Trading the Deficit: US Yields and the Japanese Yen

Rising US Treasury bond yields on the scale suggested by the issuance of an unprecedented amount of debt promises to produce sharp gains for the US Dollar against the Japanese Yen. Indeed, looking at data from 1978 – the first full year of the current floating exchange rate system after the demise of the Gold Standard – we can see a very strong linear relationship between USDJPY and the yield on the benchmark 10-year Treasury bond. Indeed, the R-squared “goodness-of-fit” measure returns a very high value of 0.73, implying that 73 percent of the variance in the USDJPY exchange rate is explained by variance in 10-year US yields. 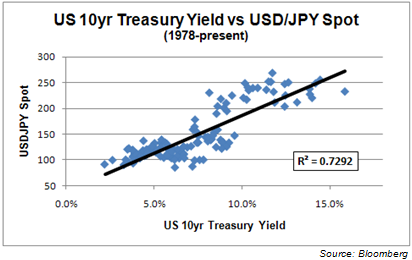 Why is this the case? The relationship is shaped largely by the savings rate, which is relatively high in Japan compared to other developed countries reflecting the steep cost of living on an island with limited space and scarce home-grown resources. This translates into Japanese investors’ preference for relatively safe, liquid assets that offer a stable income over a long period of time. Understandably, this typically means US Treasury bonds, which offer all of the desired qualities but yield substantially more than their Japanese counterparts.

Setting Up the Trade – USD/JPY

Sizing up technical positioning, USDJPY is showing a Rising Wedge chart formation bolstered by negative RSI divergence, a setup indicative of a bearish reversal. Prices put in an Evening Star candlestick pattern below the wedge’s upper boundary (near the 95.00 figure) and pushed lower, with relevant support at the Wedge bottom (now at 90.57). A break below this barrier exposes major downside targets at 87.92, 86.41 and 84.81, with any of these serving as potential turning points offering an entry into the long-term, yield-driven USDJPY uptrend. 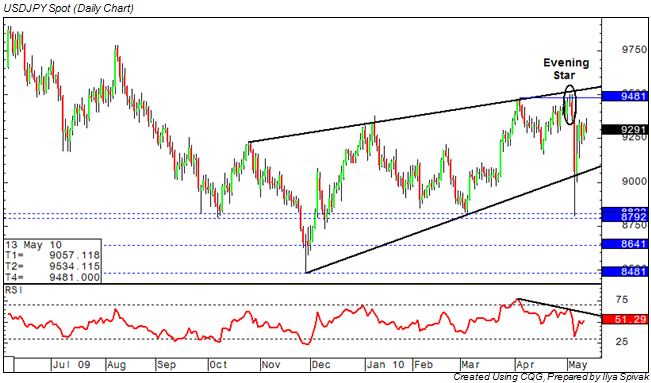