The State of Global Debt, by Country 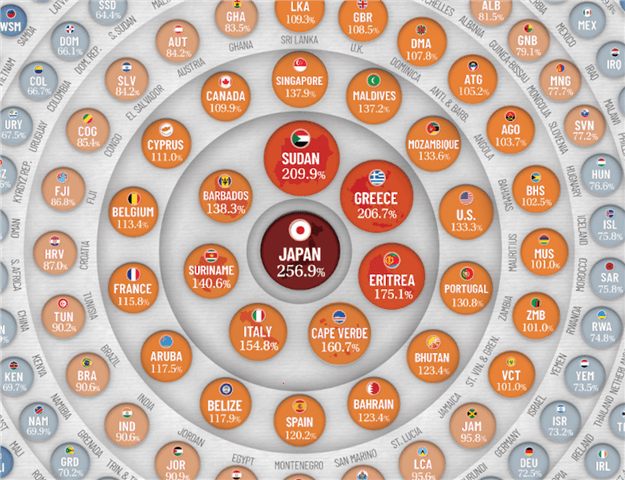 Brookings Institution economists have calculated that overall global debt rose by 30 percentage points in 2020, to 263% of GDP. Government debt rose 13 points to 97% of GDP, with advanced economies rising 16 points to 120%.

Recommended by Darrell Delamaide
Building Confidence in Trading
Get My Guide

Governments threw debt caution to the winds as central bank purchases of bonds effectively monetized the debt, allowing politicians to spend and borrow freely. Ultra-low interest rates, in some cases negative, reduced the cost of borrowing.

Modern monetary theory had already paved the way for this change in attitude by hypothesizing that countries with fiat currencies, such as USD or JPY, could issue debt more or less without limits. However, mainstream economists argue that high levels of debt stifle growth and are not sustainable. They cite problems like higher taxes, lower future incomes, and growing inequity between generations.

Debt to GDP ratio: the US

Before interest rates fell, a 60% ratio was considered the maximum sustainable and 100% seemed outrageously high. The European Union enshrined the 60% ratio in its so-called Stability Pact limiting debt to 60% and deficits to 3% of GDP for those using the joint euro currency. The EU, which observed these limits only fitfully in the past, has now bowed to reality and suspended them through 2023.

The league champion in debt to GDP has been Japan, where government debt rose to 266% of GDP by the end of 2020. Japan has defied conventional debt rules for years due to the public’s high propensity to save and to channel these savings into domestic bonds. But the 2020 figure was up significantly from 238% in the previous year.

China’s debt to GDP: too good to be true?

China, the world’s second-largest economy, registered a 2020 debt ratio of 66.8%, but the reliability of data from the notoriously opaque economy is an open question. The UK, which ranks fifth among world economies, came in at 94% in 2020, up from 82.7% the previous year.

Debt amounts and debt to GDP ratios for any country can vary considerably depending on which figures are used.

President Joe Biden boasts that the US government will reduce this year’s deficit by $1.5 trillion as government support for businesses and individuals fades out. But a lower deficit will slow the build-up of debt but by itself won’t reduce the debt to GDP ratio.

The optimistic plan for reducing the elevated debt to GDP ratio in the US and other advanced economies rests on strong economic growth (increasing the GDP denominator) that outpaces the growth in debt, which should be constrained by fiscal discipline.

This is easier said than done. Another scenario would see surging inflation reducing the relative amount debt, while at the same time allowing growth in the nominal GDP. Fitch Ratings, for one, has forecast that inflation in 2022 can bring a reduction in the global debt to GDP ratio by 2.0 percentage points.

Inflation has its own costs, however, and poses a political problem. A central bank-induced recession to tame inflation would lower GDP and likely increase the deficit by reducing tax revenue. There is, in short, no easy way out.