Natural gas futures prices have been rallying as the externalities from the war in Ukraine continue to spill out across the European continent. A few weeks ago, amid scheduled maintenance of the Nord Stream 1 pipeline, its Russia-based operator Gazprom reduced flows of natural gas to Europe by 40%.

The company recently announced that it would halve even that capacity, citing difficulties in acquiring turbines amid technical legal difficulties due to sanctions. Gas flow from the pipeline is now expected to run at only 20% capacity. For context, Europe imports about 40 percent of its gas and 30 percent of its oil from Russia.

Western policymakers have accused Moscow of energy blackmail and retaliation for European and US sanctions in response to Russia’s invasion of Ukraine. Russian President Vladimir Putin warned that additional economic measures could result in economy-crippling energy price spikes for consumers all over the world.

For Europe, the timing could not be worse. Last week, the European Commission put forward a proposal for each of the 27 EU member states to reduce their gas use by 15% for 8 months. The executive arm of the EU also stressed that national leaders should outline which sectors to prioritize amid a gas shortage.

However, the plan could be re-written with amendments in the form of exemptions for certain states and industries. Energy ministers will be convening this week to further discuss strategies for avoiding political and social unrest, which could emerge if Europe enforces strict gas rationing. However, the biggest fear is a total Russian gas cutoff during the winter.

Mr. Putin is not likely to turn off the proverbial taps completely – at least not yet. Doing so would not only moot any remaining leverage that Moscow has, but also undo decades of work put into establishing a reliable partner to consume surplus gas. Winding down gradually allows Russia room to extract concessions, versus showing all of its cards and hoping for the best.

Europe is already struggling to fill its underground energy storage ahead of peak demand in the winter months. On top of consumer use, this could mean a reduction in output, job cuts, and a reorganization of regional supply chainsfor gas-dependent industries.

What would this look like for the bloc? The International Monetary Fund (IMF) estimates that Italy, the third-largest Eurozone economy, could see output fall by as much as 5.7%. Germany, the Eurozone’s so-called “economic engine”, could lose close to 3%. With food prices rising and credit conditions tightening domestically and globally to tackle surging inflation, the storm clouds of recession may be gathering.

For European equity markets, this could mean more downside risk amid rising yields on sovereign bonds, particularly for Mediterranean countries. The Euro resume its slide against the US Dollar, whose unparalleled liquidity and yield advantage give it a leg up over its European counterpart.

Political, economic, and financial volatility could mean trouble for a bloc that relies on the unity of many diverse nation states that were – until relatively recently in historical terms – at war with each other. The Economist found that “a one percentage point decline in growth translates into a one percentage point higher vote share of right-wing or nationalist parties”. Where could we see this play out?

It just so happens that a founding Eurozone member state is slated to have an election in September. Giorgia Meloni, leader of the post-fascist right wing Brothers of Italy party, is polling in the lead. Mario Draghi, formerly a storied president of the ECB, recently resigned from his post as Italy’s Prime Minister after failing to unite his coalition. The President, Sergio Mattarella, has asked him to stay on in the interim until a replacement is found.

For the Euro and Italian bond yields, it could be a repeat of the turmoil of 2018, where a general election was followed by a “Battle of the Budgets” between Rome and Brussels. Leading up to the election, sovereign bond yields may oscillate with greater magnitude, and capital outflows from the Euro may increase.

Traders are anticipating for the Fed to raise its target policy interest rate by yet another 75 basis points, adding to the three-quarter percent hike in June. In the face of raging inflation, monetary authorities are doubling down on tightening. With the hike already priced in, where might volatility come from?

Fed Chairman Jerome Powell’s comments and outlook will likely be a source of market angst. Investors are already pricing in a 25-basis-point cut in May 2023, but they may be getting ahead of themselves. Consequently, a resolute Fed at this next meeting could put markets on the defensive if a regime of comparatively higher rates looks set to become the “new normal”.

The US Dollar may benefit from unexpectedly hawkish comments, renewing EUR/USD selling pressure after the pair’s recent recovery. That tepid rise followed a dramatic fall that briefly reached parity earlier this month. Equity markets, which have enjoyed over a decade of an ulta-accommodating credit regime, may panic as well. Spillover may bleed into alternative assets.

EUR/USD recently rebounded after reaching a 20-year low and may soon retest a descending resistance channel dating back to March. The pair repeatedly attempted to breach the slope of depreciation, before ultimately capitulating and continuing its descent. Selling pressure appears to be exhausted, but the temporary respite may be just that: temporary. 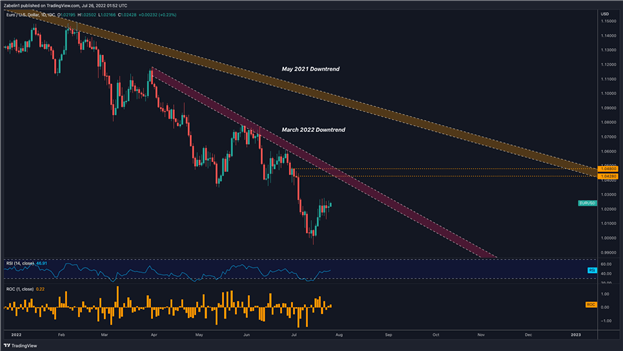 The macroeconomic circumstances still point to a gloomy outlook for EUR/USD. The recent recovery may be more a function of traders exiting their short positions as risk premiums become skimpier and the threat of a reversal increases. Looking ahead, even if the pair shatter March resistance, the road recovery will be long and arduous.