Russian forces are continuing to advance into the eastern city of Severodonetsk, and new evidence has emerged that they have used cluster bombs and other “scatter-able” munitions.

Meanwhile, the US Treasury’s Office of Foreign Assets Control said recently that investors in the US are not allowed to acquire Russian debt. JPMorgan Chase and Goldman Sachs had been making markets in the space, but both institutions are pulling back. What the ripple-effect of this will be beyond Russia is unclear, but given the increasing fragility of financial markets, it would not be surprising if this development reverberated back and further pushed equities lower and the haven-linked US Dollar higher.

On Sunday, France held the first round of the French National Assembly election, with the second one exactly a week later on June 19. Voter turnout was at a historic low of 47.5%. French President Emmanuel Macron’s Ensemble alliance is being challenged by a hard-left coalition led by Jean-Luc Mélenchon.

Mr. Macron’s centrist coalition won 25.7% and is now tied with the hard-left alliance, NUPES. The election comes at a crucial time where the French President’s fiscal plans could be thwarted if he is not able to maintain his majority in the legislature. But how are these challenges being reflected in France’s political risk?

GeoQuant’s risk score for France shows that institutional-level assessments of the country’s political risk recently peaked in March and have since drastically declined. Keep in mind however, this same metric continued to drop at a steep decline leading up to and during the invasion of Ukraine. However, the recent uptick in the early part of June suggests domestic politics may be influential. 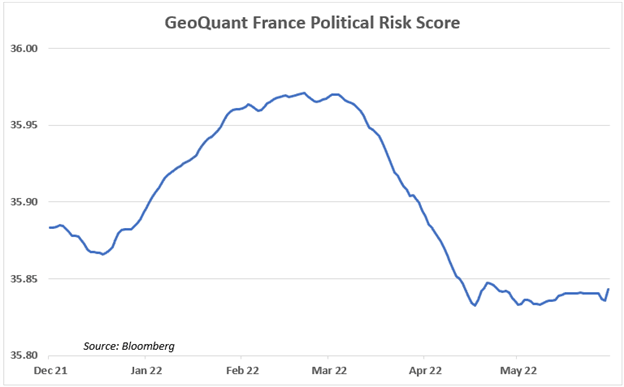 Perhaps not entirely by coincidence, French bond yields have also been rising. To assume a univariate element (i.e., the election) is pushing bond yields higher alone seems foolish – it is almost certainly a confluence of forces pressuring them upward. What the election results over the next two weeks will show is the relative magnitude of this factor and its impact on domestic bond and equity markets.

Having said that, while the war in Ukraine may not be having a direct impact on France per say, the disruption of supply chains fanning the flames of inflation is an indirect influence. How the economic dent that it inflicts will influence domestic politics is unclear, but as I wrote in my guide on trading politics, weak fundamentals almost always stir radical elements.

Members of the World Trade Organization (WTO) will be convening this week for the first time in almost half a decade. With rising commodity prices (such as on crude oil) and concerns about food safety at the forefront, this meeting will be crucial. In addition to the topics listed above, COVID-19 vaccine patents and fishing subsidies are on the agenda.

Perhaps most importantly, the meeting may mark a bigger test of the fortitude of globalization, and if consensus on so-called “low-hanging fruit” issues can be reached. With rising tension between the US and China - with the latter’s regionalization strategy in full force - international cooperation now is crucial for limiting the economic damage from political and economic externalities.

WTO economists have warned that “dividing the world into two economic spheres would lead to a 5 percent decrease in real global GDP over the longer term”. This figure may be conservative, given that the impact of rising interest rates has not yet been fully felt or priced in. With that in mind, it is crucial to watch the Fed rate decision this week.

Interest rate futures are showing traders are expecting officials to raise interest rates by 50 basis points again, bringing the Federal Funds Rate (FFR) range to 1.50%-1.25%. Inflation figures for May on both a year-on-year and month-on-month basis beat expectations with increases to 8.67% and 0.6%, respectively.

These alarming statistics will probably fortify the Fed’s resolve to tame inflation, and this was not lost on investors. After the figures were published, interest rates futures all rose across the board ahead of the Fed’s upcoming meetings. The periods of lag between when a policy is announced, implemented, and the effects are felt could add additional uncertainty.

If price growth remains elevated, monetary authorities will have little choice but to continue raising rates by outsized increments (relative to how rates have moved over the past few years). Tightening aggressively risks plunging the US economy into recession even as supply shocks make key contributions to the inflationary trend. The ultimate scare herein is “stagflation”.

How will this impact the US Dollar? Hawkish rhetoric looks likely to push the Greenback higher as it gains a yield advantage over its G10 peers. Angst about the possibility of recession also brings out the allure of the Dollar’s unrivaled liquidity. Year-to-date, it has the highest spot return out of all the G10 currencies against the Euro.

Over the past three trading days, EUR/USD has had a spectacular decline of almost 3 percent. The drop is all the more eye-catching given the pair’s liquidity. In fact, it is arguably the most liquid asset in the world, which ought to dampen volatility. EUR/USD’s fall appears to be mostly a function of the stronger USD rather than a weaker Euro. 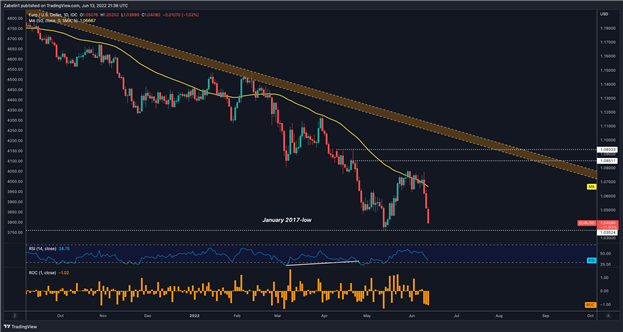 The pair is now hovering just above a five-year low at 1.0352, but RSI is indicating EUR/USD is heading into so-called “oversold” territory. Conventional wisdom stipulates that when an asset has entered this area, a reversal sometimes follows. However, the moving average taken over the past 50 days shows momentum is not slowing and has in fact steepened.