Since the 2020 highs, Silver has been in a corrective sideways nature. “Corrective” meaning the instrument is taking a breather against the preceding trend, which can include retracing in price or consolidating.

Silver was respecting a significant support region between $22 - $23. This support zone broke in May 2022 and it formed a new lower low.

Let's look at a daily chart and see why this is relevant. 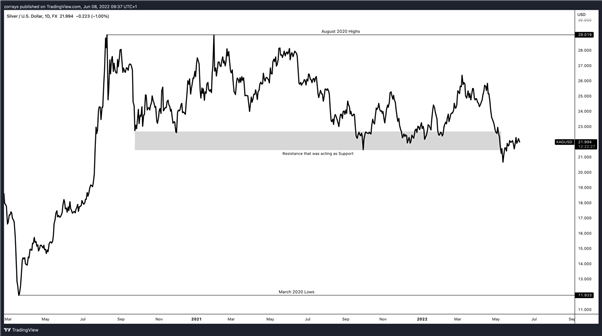 The shaded zone was previously a respected support area and it is now considered as resistance, a ceiling for price to respect.

Now that Silver has formed a new low, my hunch is that this corrective phase is not done yet, and I’m looking for silver prices to potentially decline further in the near-term future.

Let’s drop timeframes and see where it could go from now. 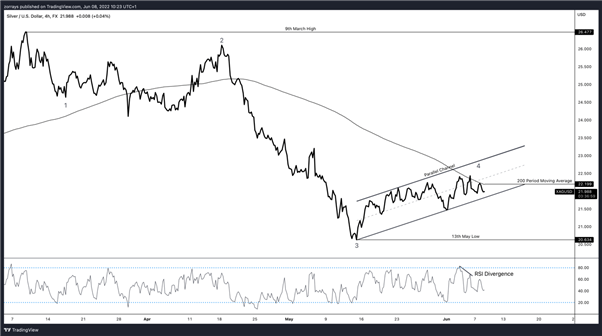 An Elliott Wave count to this chart offers further context. Since the March 9 highs, Silver is unfolding in a 5-wave sequence to the downside. Silver completed wave 3 on May 13 and price closed at $20.6. A 5-wave sequence in Elliott Wave Theory is known to be an impulse wave. Impulse wave means the move was in the direction of the dominant trend. In Silver's case, the trend is currently bearish on the 4-hour timeframe.

Recommended by Zorrays Junaid
Traits of Successful Traders
Get My Guide

It is trading a wave 4 correction which is contained within parallel lines. Monitoring wave 4 is important right now before Silver's next move. After wave 4 is completed, expect wave 5 which is the final wave of this bearish sequence. Wave 5 would form a new low.

Simultaneously, as Silver is chopping around the 200-period Moving Average, this short-term bullish cycle is losing its momentum. Price is forming new shallow highs and the RSI is forming new lows. Could these short-term buyers be running out of steam? I would say so.

What can we expect in the next couple of weeks? 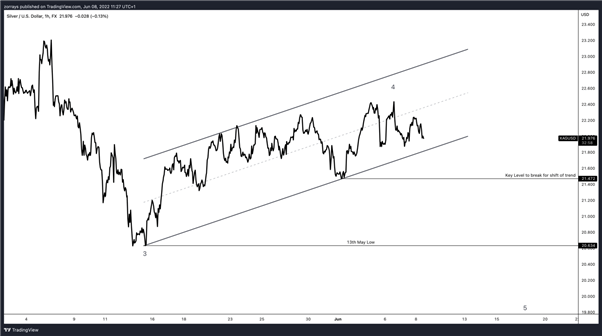 Silver traders must wait for the wave 4 correction to complete. Once wave 4 is done, expect price to decline and form a new low which would unfold and complete wave 5. Once wave 5 is done the current 1 – 5 impulse wave is completed.

Speculators who are watching Silver closely should wait for price to break the bullish corrective cycle. For that, I would want to see $21.47 key level to break. This key level would shift the current short-term bullish trend into bearish. Once the key level is broken the next price to break would be the extreme of wave 3, $20.6 – May 13 low.