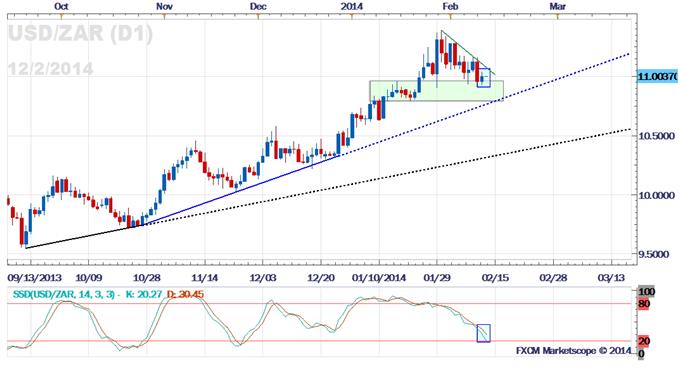 Forex - USD/ZAR Returns to Familiar Range during February Sell Off

The South African Rand has been weakening steadily versus the US Dollar the past several months, almost a year now. The USD/ZAR’s longer-term appreciation has been stunted over the past two weeks, as efforts by emerging market central banks have prevented a currency crisis from emerging. Concerns had developed that the end of the Federal Reserve’s QE3 would provoke continuous capital outflows from emerging markets as “hot money” flows reversed.

The tides of concern over emerging markets have pulled back, and USD/ZAR has traded lower in a very orderly descending channel. On both charts below this is marked by a descending trendline shaded green. This is characterized as orderly due to the fact that there have been no moves greater than two consecutive days since the 2014 high was set on January 30. The calm progression lower is seen by the smooth, rounded nature of the Slow Stochastic indicator on the daily chart:

Now, the indicator has ‘digested’ its overbought reading as it enters the familiar support zone. Price action in recent weeks may merely be just a more assertive, corrective pause before the longer-term rally continues. 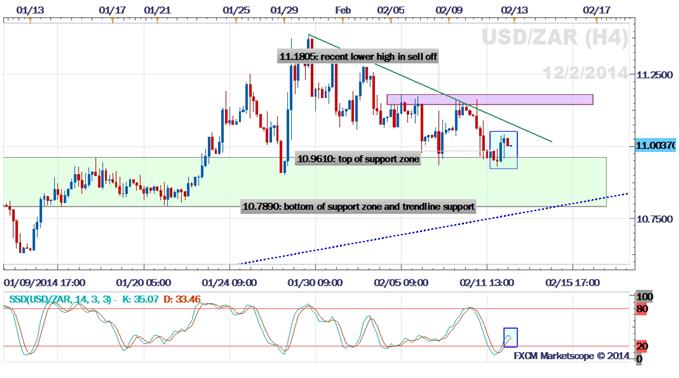 The 4 hour timeframe for USD/ZAR drills down to a low enough timeframe to clearly outline the support zone and its significant points of price interest in the chart above. Specifically the top of the support zone at $10.9610 was first resistance on January 15. Later, it served as support on January 23, January 28, and February 12. The Slow Stochastic indicator has issued a “buy” signal at the top side of this support zone.

USD/ZAR could be ready for its next round of appreciation if price steadies at its current levels. Although the Slow Stochastic indicator has already offered a “buy” signal, confirmation that the downtrend from the January 30 high has reversed would be the conservative, and more risk management appropriate move.

In that case, USD/ZAR saw a fair deal of intraday and intraweek selling during the recent decline near $11.1805. This marks the most recent lower high during the selloff, and if cleared, would then establish a new near-term series of higher highs, suggesting an uptrend may be forming.

This would be an uptrend in the short-term worth exploring in more detail, as USD/ZAR remains among longer-term trend support. On both charts, the blue solid then blue dotted line represents the trend from the October and December 2013 lows, and a turn above $11.1805 would help keep this uptrend intact.