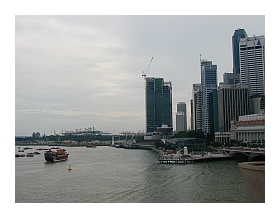 • US Dollar component under pressure on bad economic data.

During the recent bout of emerging market turmoil, there have been several currencies that have withstood the storm thus far, including the Singapore Dollar. The root of the emerging market storm is simply the fact that then-Federal Reserve Chairman Ben Bernanke warned that the central bank would end its QE3 bond-buying program. The end of QE3 meant the slowdown of “hot money” flows, which had caused massive external trade imbalances across the globe.

What are these external imbalances? They occur when countries run large current account deficits or surpluses as a result of massive international financial flows. The currencies hit the worst in recent memory – the Argentinian Peso, the Russian Ruble, the South African Rand – have all been afflicted with having this very issue, a current account deficit.

This could be the reason why the Singapore Dollar has been spared the worst of the emerging market turmoil over the past several weeks. Singapore is actually on the side of having a massive current account surplus, although its advantage is waning. In the first quarter of 2011, Singapore had a current account surplus equivalent to 25.9% of GDP. In the third quarter of 2013, this surplus was only 17.4% of GDP. 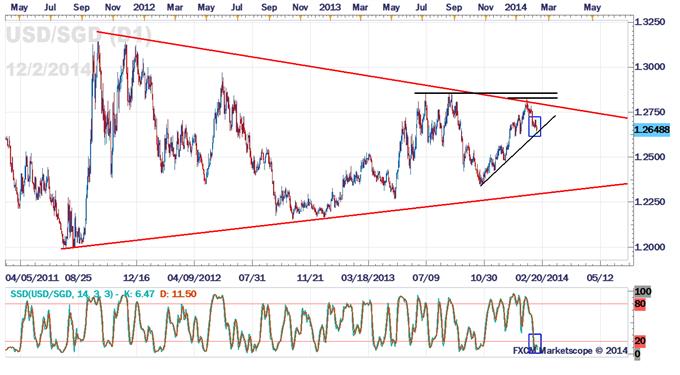 The lack of a current account deficit may be helping insulate the Singapore Dollar from the emerging market storm, if not buying it time. USD/SGD remains ensnarled by a symmetrical triangle since the second quarter of 2011. On the upside, price has yet to break the 2013 highs established in July and August at $1.2859.

How much is the current account aspect making for traders? Let’s compare the performance of the Singapore Dollar in 2014 year-to-date compared to the South African Rand using the most recent current account data. In the third quarter of 2011, Singapore had a current account surplus that was equivalent to 17.4% of its GDP. 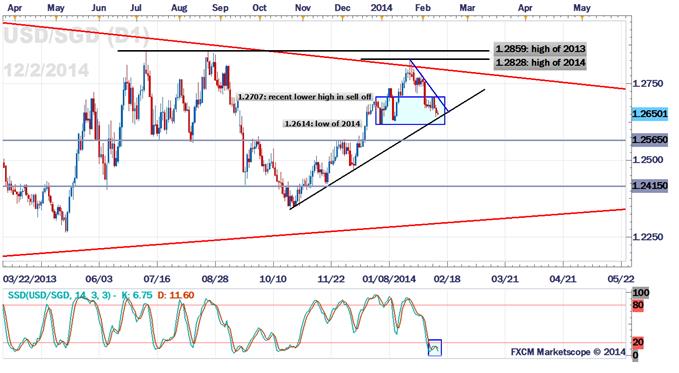 The selloff in USD/SGD over the past month has produced the lowest Slow Stochastic indicator reading since the end of October. The USD/SGD bottomed at that point, and went on to establish an inverse head and shoulders pattern. The head and neckline of this pattern provide a series of lows that establish a defined uptrend on the daily chart, indicated by the ascending trendline shaded black.

The current price level that USD/SGD is approaching is very important from a support perspective for two reasons. First, at $1.2635 the uptrend from the October, November, and December lows is located. Slightly below that the 2014 low of $1.2614 resides. If the market breaks through $1.2614, the easier trade might be lower in the short horizon.

The previously mentioned inverse head and shoulders pattern offers reference points for support on the way lower at $1.2565 and $1.2415. The intense oversold reading in the Slow Stochastic indicator leaves open the potential for a quick short covering rally. The most recent lower high in the sell off during the past month is $1.2707, and only above there would a bullish bias be favored again.