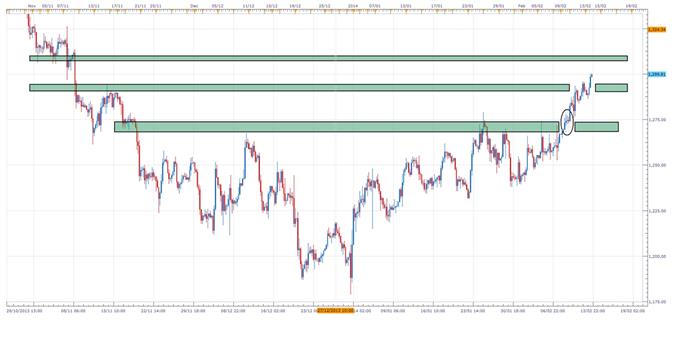 A Strong Breakout Boosts Gold Prices; Will It Last?

After regaining some of its strength throughout last month, Gold looks like it might be finally turning a corner. Do the charts support this bias, and how long will it last?

After a dismal latter few months of 2013, the price of gold has risen against the dollar so far in 2014. Now trading back up at around 1,300.00 from December lows at 1,178.00, investors and traders alike are wondering whether the bullish momentum will continue for the foreseeable future. What can be gleaned from the charts to help answer this question?

First, take a look at the four chart in XAU/USD above. This chart shows gold prices breaking through resistance on February 10th, and rallying up toward its current levels around 1,300.00. Prior to the breakout, the price of gold formed an inside bar pattern, which represents a certain level of indecision in the market and often precedes a large price move. This turned out to be the case, and gold prices now look to have met a certain degree of resistance at a previously significant level. Keep an eye on price action around this level for clues as to whether the bullish move will continue. If gold's price can close above 1,300.00, the initial target will be around previous support at 1,307.00-1,310.00.

Now take a look at the daily chart. Often when the price of an asset experiences a big price upwards shift it will pause to consolidate as traders sell their holdings and take profits. This can cause price to lose some of its gains, at least temporarily, and is called a correction. A number of points on the daily chart suggest that, despite the bullish momentum illustrated by the four-hour chart, gold may be due for a short-term correction. The first sign is the confluence of resistance at its current level. Confluence of resistance simply means a combination of one or more resistance levels and serves to strengthen the bias. Currently, the price of gold sits just below not just the 1,300.00 key psychological level, but also the 200-day moving average.

The third and final sign comes from the commodity channel index (CCI) indicator. The CCI indicator is a bound oscillator, meaning it moves between two levels, in this instance a +100 line and a -100 line. When the indicator reads below -100 it suggests the asset in question might be oversold and, in turn, due for an upside reversal. Conversely, when the indicator reads above +100, it suggests the asset might be overbought and due for a downside correction. Gold is currently overbought against the dollar, hinting at a short-term downside correction. It is important to remember, however, that an asset can remain overbought or oversold for quite a long time, so traders will generally only enter once the indicator crosses back below or above the respective levels.

If gold's price does correct, expect a downside move perhaps as far as 1,275.00, then watch this level carefully. If price closes back below its recent breakout level, this could indicate the recent gain is a false breakout and just part of the longer-term downtrend. If the breakout resistance level acts as support however, this could indicate further bullish potential in the precious metal.