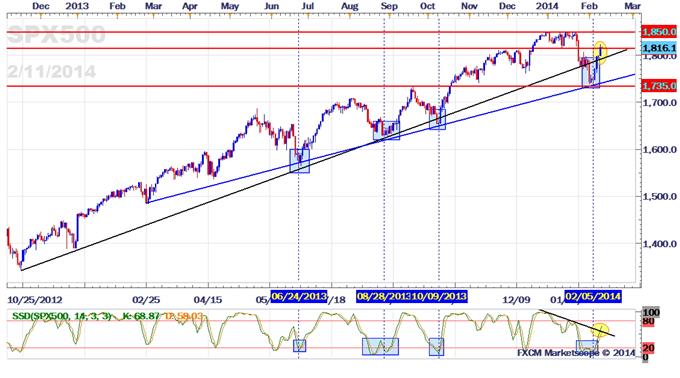 Traders have found new reasons to drive riskier assets higher over the past several days. Today’s jumping point - events unfolding in Washington D.C. have cleared the air for both fiscal and monetary policy in the future. From a fiscal perspective, the US debt ceiling is set to be raised until March 2015, with a clean debt-limit resolution having been agreed upon in the House of Representatives in the afternoon. Fiscal gridlock has been a thorn in the side of the US economy, and this effort to reduce uncertainty for the next year was praised by investors.

Of course, we would be remiss if we did not pay respect to the new Federal Reserve Chair Janet Yellen. The new Fed Chairwoman struck an optimistic tone today. The DailyFX Research team compiled this report summarizing the chair’s outlook, the gist of which is that the Federal Reserve will continue to taper QE3 as long as the US economy continues to improve. That’s news that traders can get excited for!

Even though the Federal Reserve Chair offered positivity, there were certain areas of concern that should be noted. Ms. Yellen suggested that the unemployment rate (what is known as the U3 rate) may not be the best indicator of the health of the labor market. She announced that long term joblessness was a concern. Perhaps she means that the underemployment rate is more important (what is known as the U6 rate). Regardless, the new Fed Chairwoman made clear that once the common unemployment rate (U3) hits 6.5%, the Federal Reserve will not raise its main interest rate. Currently, the main interest rate is 0.25%, and the unemployment rate is at 6.6%.

Because Fed Chairwoman Yellen was not only optimistic on the US economy’s potential for 2014, but also that the Fed intends to differentiate that tapering QE3 does not mean that it is trying to tighten interest rates (higher interest rates), higher risk instruments responded favorably today. The SPX500 was a main benefactor, having its best day in over one year.

In the chart above we see that the SPX500 has rallied back through an important level of resistance at 1807, which was the latest former high during the downtrend from 1850 in the middle of January. We took note to this level because it represented the high point before sellers overtook buyers definitively in the market before the selloff to below 1740. Although the SPX500 stalled between 1805 to 1810 in the early morning on Tuesday, the remarks made by Ms. Yellen sparked the breakout.

We have been watching the 11- month trend dating back to March 2013, which was tested last week and held at 1738. Previously, each time the S&P 500 sold off into this trendline, the Slow Stochastic indicator turning higher out of oversold territory and issuing a “buy” signal marked the low. This may have happened once again, as the SPX500 settles above former highs at 1815, and the Slow Stochastic indicator has broken its downtrend. The buy signal was issued on February 6th. 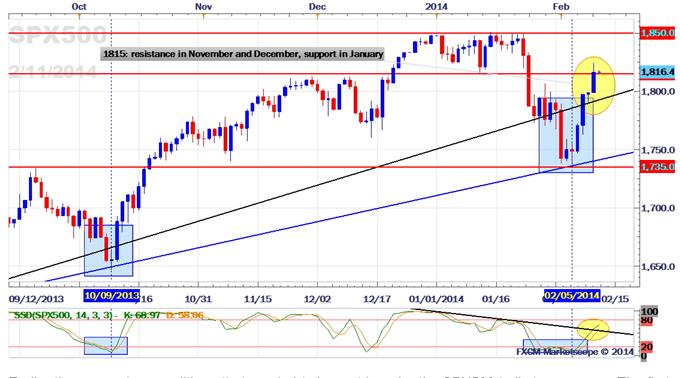 Earlier, there were two conditions that needed to be met in order for the S&P 500 bulls to reengage. The first was the market needed to hold above 1793 to 1797. The other was that the market needed to close above 1807. The fact that the S&P 500 has climbed through the next level of resistance so quickly, especially as the Slow Stochastic indicator breaks its downtrend, gives confidence that traders are comfortable with pushing the market higher – for now.

A retest of 1850 (high in 2014) is seen having increased likelihood at present as each hurdle higher is cleared with ease. The weekly low of 1790.1 is a point of risk reference for traders to the downside as the S&P 500 tries for new highs.