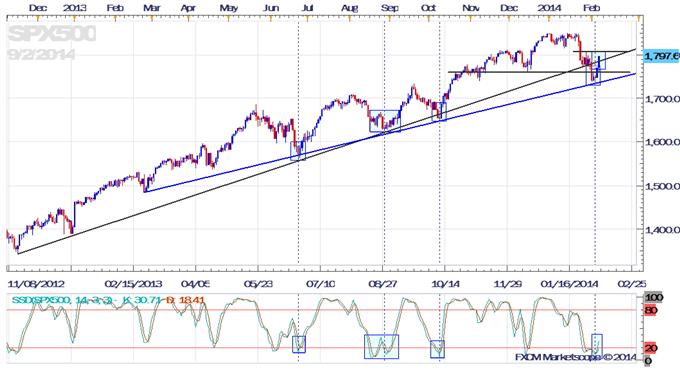 • Lots of time for speculation over QE3 as next Federal Reserve meeting month away.

A middle of the week sell off in stock markets around the world was met with quick support as the “buy the dip” mentality that ruled trading in 2013 apparently kicked back in. The S&P 500 had cleared its first hurdle lower, 1760, and the rising trendline that held up price all the way back to October 2012 appears lost. While the steeper uptrend was lost, by the end of last week, traders had leveled the ship with new support uncovered at 1738. Traders have been grappling with the potential impact of the Federal Reserve ending its most recent stimulus program, nicknamed “QE3.” On a fundamental basis, there is concern that the end of the Fed’s QE3 could mean lighter investor demand for risky assets, i.e. the S&P 500.

This was the case with stocks in the US, at least since January 29th. On that Wednesday, the Fed announced its second cut to QE3, cutting from the program another $10 billion per month. The continued tapering of QE3 is a sign that the Fed believes that improving US economic data will warrant a reduction in stimulus measures. If one believes that stocks are boosted by the Fed’s QE3 actions, then he or she will not be surprised to find that the rally from the lows under 1740 this week was propped up by US economic data suggesting the Fed will be more cautious as it ends its stimulus programs. The January jobs report showed that only 113,000 jobs were added to the US economy, far below the consensus forecasts which ranged between 180,000 to 190,000. When one follows the mainstream financial media, he or she might hear the adage ‘bad news is good news,’ which may illustrate the idea that stock markets are boosted by QE3.

Although the first key levels of support were cut through last week, at 1760 and 1775, a more recent trend has sparked the rally. The 11-month trend dating back to March 2013 was tested and held at 1738. Earlier concerns about a larger breakdown are put on hold as long as this trendline (blue line with recent touches highlighted by blue boxes) stays intact.

The trendline that has provided support for price starting in March 2013, and then again in June, August, and October 2013, has seen the Slow Stochastic indicator (SSI) develop in a similar manner. What we mean by that is that during each time the S&P 500 sold off into this trendline, the Slow Stochastic indicator turning higher out of oversold territory and issuing a “buy” signal marked the low. 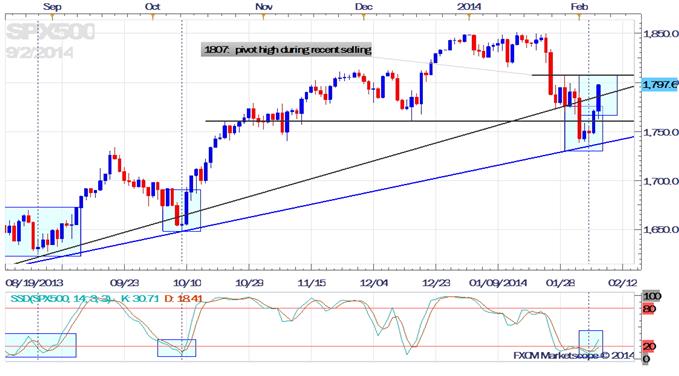 If the S&P 500 is bottoming after several weeks of weakness, more will need to happen than just a “buy” signal on one indicator. However, one of the conditions has already been met. The S&P 500 closed the week at 1797.6, which was just enough to retake the ascending trendline going back to the November 2012 low. It will be encouraging for bulls if the S&P 500 can hold above this trendline at 1793 to 1797 this week. The gut feeling is to declare the move lower the past several days a “false breakout,” but the second condition for traders to reengage the S&P 500 on the long side has not yet. The most recent lower high during the sell off from 1850 came in at 1806.90, but we will call it 1807 flat. A daily close above this pivot point would suggest that recent sellers have been overtaken, opening the door for the rally to continue towards 1850 once again.