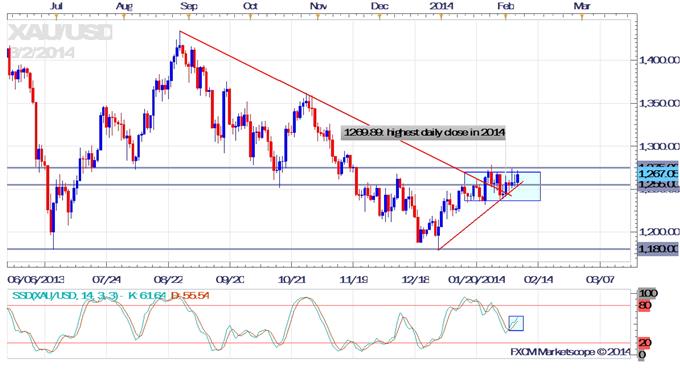 After several days of choppy prices, precious metals’ prices have started to drift higher. Gold and Silver prices are back at the topside of recent ranges – periods of consolidation in price since the middle of January. Precious metals have been a good indicator of broader market sentiment: price has been rather directionless as traders and investors grapple with the near term slowdown in US economic data versus the longer term impact of the Federal Reserve tapering QE3.

The data at the end of the first week of February did not meet the market standard that would lead a trader to step up their speculation of the QE3 tapering. The weak US jobs report showed that the labor market added only 113,000 jobs, far beneath the 187,000 that many analysts forecasted. In recent history, precious metals have needed weak US economic data in order to rally, and this proved to be true once more on Friday. After several days of consolidation in price (going back to the middle of January), Gold and Silver may have found the fundamental boost they have needed to escape their ranges.

Gold price has turned away from $1275 on several occasions this past week, but early signs may be pointing to an eventual breakout higher. The closing high in 2014 is $1269.89, and therefore should be considered an important level of “closing resistance.” While highs and lows are important reference points, experts often point to closing prices as being more important as they are the final agreed upon price for the day – the market equilibrium at that time. A close above $1269.89 would suggest that traders have reevaluated their bearishness towards the price of Gold earlier in the year. Thus, there are two ranges here in Gold to watch.

The first is the “closing range,” which when rounded, sees a tunneling of price between $1236 and $1270 (these are not the exact closing highs and lows but rather the closest round figure for simplicity). When price closes beyond either side of these barriers, it would give evidence for a more significant breakout in that direction. We see that price is testing the topside of the recent range, which puts our initial bias in favor of Gold to rally. A daily close above $1270 would suggest that the absolute highs above $1275 are due to be tested. After NFPs, we see that traders might have less of reason to be optimistic about the US labor market today, which could serve as the catalyst for a breakout. The Slow Stochastic indicator (SSI) remains bullish after its “buy” signal on February 4th. 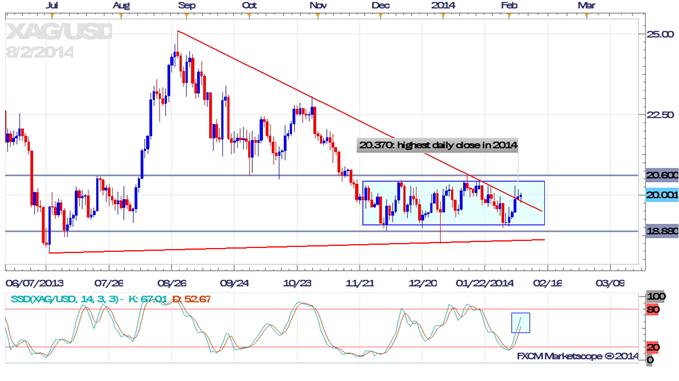 When we look at Silver prices we see that they may be leading Gold. Silver prices broke lower at the end of January and Gold inched lower towards the bottom of its recent range near $1230. The rebound in Silver from the lows near $18.880 coincided with the rally in Gold as well. Now, both precious metals are on the verge of breaking higher. If Gold is to break and close above $1275, the price of Silver will likely have to settle above $19.850. So far so good, with Silver prices closing on Friday at $20.001.