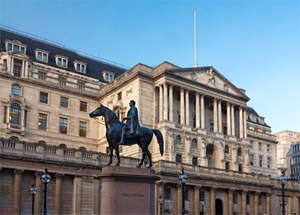 As the Bank of England reveals its interest rate and asset purchase decisions, what levels are traders watching in the GBP/USD?

At 12:00 GMT on February 6, the Bank of England revealed its interest rate decision and its ongoing asset purchase program target. As expected, the UK central bank decided that the interest rate would remain unchanged at 0.5%, a level at which it has been fixed since March 2009. The asset purchase target also came in as expected, at £375 billion.

What effect did this have on the sterling, and what can price action around the announcement tell us about the future direction of the GBP/USD? First, let's establish what both of these announcements mean. The interest rate announcement is important primary because short-term interest rates are the driving factor behind a currency's valuation. However, as far as short-term market reaction is concerned, the big moves come when the release does not fall in line with expectations. Therefore, if the rate comes out higher than expected, the currency to which it relates will normally gain strength. Conversely, if the rate comes out lower than expected, the currency will likely lose strength.

The asset purchase announcement refers to the amount of money the BoE aims to introduce into the UK monetary system. By buying gilt-edged securities (GILTS) from private investors, the central bank effectively prints money, which theoretically stimulated spending and investment. Therefore, if the announcement is higher than expected, traders view this as the central bank expressing concerns over economic growth. In turn, a higher than expected number is bearish for the sterling. Conversely, a lower than expected figure suggests a positive outlook, and in turn will likely be bullish for the GBP. 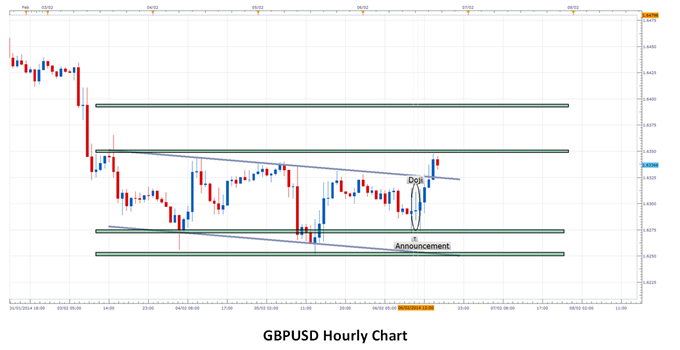 Now let’s look at the GBP/USD chart above. Having lost strength on Monday, the pair has been in something of a consolidation phase over the past few days, ranging gently downwards between 1.6325-1.6343 resistance and 1.6260-1.6273 support. Today's announcement (highlighted) initially created some uncertainty, as illustrated by the doji candlesticks. A doji forms when the price of an asset opens and closes at a similar price, and can indicate bears and bulls are battling to take control. The pent up momentum when either the bears of the bulls come out on top can often create a sharp move. In this instance, the bulls took control and. In the hours following the announcement, broke price through the upper trendline of the channel. Price currently remains above the channel, yet looks to have encountered resistance just short of 1.6350. This resistance might cause a corrective move back down towards the broken channel, and if so, price action around this level will offer clues as to the future direction of the pair. If the GBP/USD finds support at the channel, and does not close below it, expect a return to 1.6350. Beyond that, there is a clean run up to 1.6390-1.6400.

This however, is an optimistic outlook for the sterling. If today's action proves to be a false breakout, and price closes below the upper channel line over the next 24 hours, expect a return to the ranging conditions that have dominated the last week. A close below 1.6325 would put 1.6275 as an initial downside target and, beyond that, 1.6250.