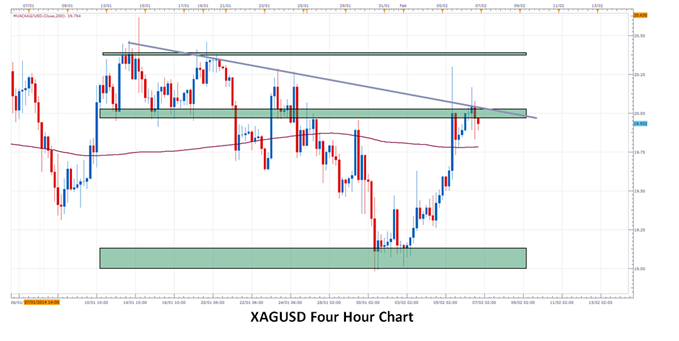 Risk Aversion Boosts the Price of Silver, But Not the Long Term Trend

Investors' fear of an equity bubble has translated to a rise in the price of precious metals this week. The question now is, will it continue, and do the technicals support further gains?

As investors become increasingly uncertain about the future of the U.S. equities market, many are reducing their exposure and transferring into haven assets such as gold and silver. This increase in demand has caused the price of silver to rise this week, but will the bullish momentum continue?

First, take a look at the four hour chart. This gives us a "zoomed in" view of the recent rise. Silver prices bottomed out around the 19.00 flat level towards the end of last week. Since then, a sustained rally has driven price up to where it currently resides, just shy of 20.00 flat. As the chart shows, the price has encountered substantial resistance around this level, initially breaking as high as 20.25 before being sold back down to 19.75.

Shorter-term swing traders will look to price action around this level to determine whether a long or a short trade is in order. If the Silver price breaks 20.00, expect a bullish continuation at least as far as 20.25 and likely through to 20.38-20.50. If current resistance holds however, the initial downside target will be the 19.50 level and, beyond that, last week's resistance range at 19.00-19.12. 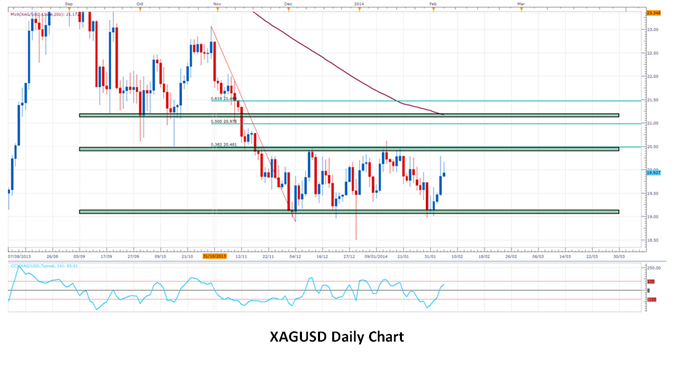 Now take a look at the daily chart. This chart reveals that silver has traded within a relatively tight range between 19.00 and 20.50 for the past two months. At its current price just shy of 20.00, silver still has some way to go before it reaches the top of its range. A look at the CCI indicator supports this thesis, with a reading of 65.41 indicating there is some way to go before silver becomes overbought at 100.00. The key level to watch will be the 20.50 range resistance, which has not only acted as both support and resistance in the past, but also coincides with the 38.2% Fibonacci retracement of the October highs and November lows. If silver prices can break through this confluence of resistance, expect further gains to at least 21.00 flat (the 50% Fibonacci retracement) and likely beyond to a previously significant support level at 21.14-21.20. 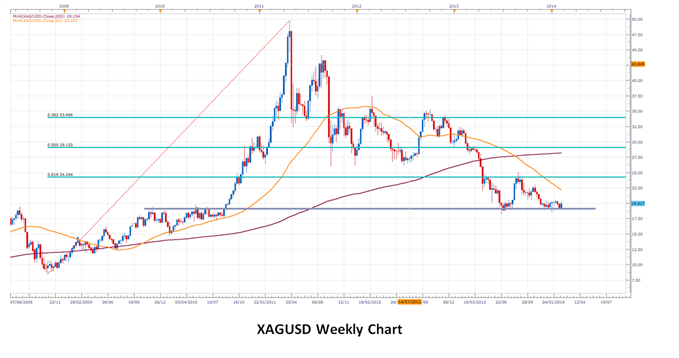 Finally, take a look at the weekly chart. The main takeaway from this chart is the long term support/resistance at which price currently resides (around 19.00). The 19.00 flat level acted as strong support in July 2008, and on numerous occasions during 2009 and 2010. Once price broke this level, it did not retest it until June last year. From this retest, price bounced considerably as the level offered strong support. If price breaks 19.00 expect a sharp decline, initially towards previous support at 17.50 and, beyond that, down towards 15.00 flat.

All said, fundamental factors will likely decide the longer term direction of silver, but keep an eye on the key levels mentioned in this article to help you identify potential entry and exit points.