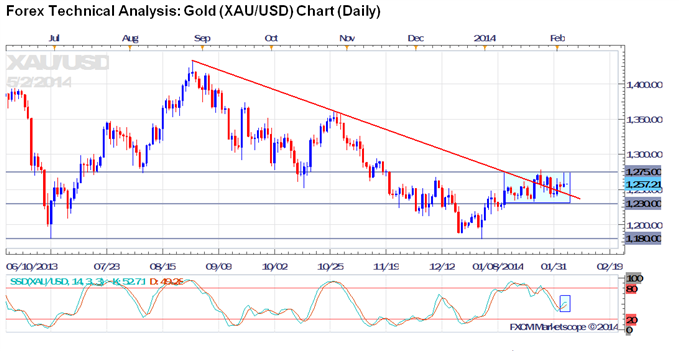 Gold and Silver have been trapped in generous ranges the past several weeks, and a breakout attempt earlier today was spurned. Traders are waiting on Non-farm Payrolls on Friday.

US data on the forex calendar sent precious metals on a ride today. A worse than expected jobs report from payrolls firm ADP helped focus remain on the stretch of weakness in employment and housing figures since November. The report wasn’t that bad – only missed by 10K – but at 175K, the labor market is still barely above water.

Because the ADP data was below the broader market forecast for the US Change in Nonfarm Payrolls, traders were jumpy and started to behave as if the official jobs report would disappoint too. Precious metals rallied on the missed figure as the US Dollar declined in value. In recent history, a fundamental driver of Gold strength has been speculation around the Federal Reserve’s policy. Any data that infers that the Federal Reserve will keep interest rates lower for longer in theory should support precious metals.

Any chance that Gold price might have had to break above the recent range high of $1275 was stunted with the second and final jobs report of the day. The Institute of Supply Management (ISM) Services/Non-Manufacturing Index came in slightly better than the market forecast (54.0 actual, 53.7 expected, 53.0 prior), the first stronger piece of US data in recent memory.

But the big news in the ISM’s report wasn’t the overall headline figure. Instead traders saw the improved Employment reporting figure at the highest figure since November 2011. In the US economy, about two-thirds of all employment is service sector based. This report may have helped ease questions over the upcoming US Change in Non-farm Payrolls report on Friday.

Now that we see that traders had a reason to be more optimistic about the US labor market today, Gold’s rally stalled ahead of $1275. Even though the Slow Stochastic indicator remains bullish, the %K and %D lines have come closer together to the downside. This may suggest that bullish momentum was weakened today.

The market is signaling that the $1230 to $1275 range is important until a catalyst can provide a reason for a breakout. Breakout traders should wait for price to move through either side of the range to look for a potential trading opportunity. If price falls below $1230, Gold prices could see a retest of the lows near $1180. Silver has traded slightly differently than Gold the past several days. Gold has traded through the downtrend from the October and November highs, but Silver has not. Today, this resistance proved important. The wick on the daily candle shows that price failed on its initial breakout attempt through $19.850 (the red declining trendline).