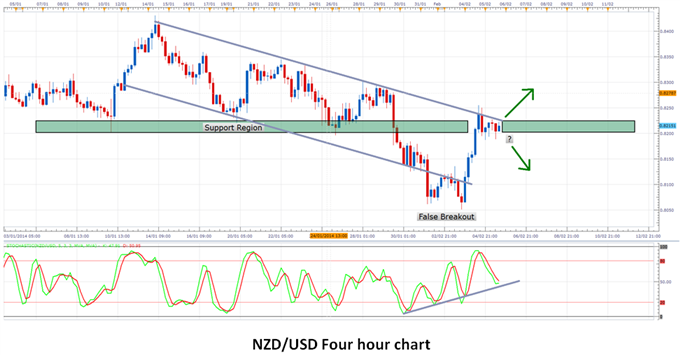 A fall in unemployment has created some short-term strength in the NZD, but will it last? Here are the levels to watch.

On February 4, Statistics New Zealand, the statistical arm of the New Zealand government, reported the nation's quarterly unemployment rate. The figure came out at 6.0%, versus expectations of the same number and previous quarter unemployment of 6.2%. This represents 6.8% fall from the fourth quarter 2012 highs of 7.3%, and is the lowest level of unemployment since 2009.

With this sort of positive release, how did the currency market react, and what can price action tell us about the likely future direction of the New Zealand Dollar?

First, take a look at the four hour chart in the NZD/USD. The New Zealand Dollar has been losing strength versus the USD since the middle of January. Price had been trending downward between a channel (highlighted) until January 31st, when a host of positive U.S. data catalyzed a downside breakout at the lower end of the range around 0.8123. Price then retested, and was rejected at, the broken trendline around 0.8100. The rejection did not last long however, as price found support around 0.8050 and soon after, the positive employment data came out. This catalyzed a strong, rapid break back into the channel and to its upper range at 0.8200-0.8225.

Price is now consolidating at this level, which has acted as key support in the past. This is an important level to watch; if price can break above this level, and get a strong close above it, the NZD will likely gain further strength against its U.S counterpart. The initial target level will be 8.300 flat, which has served up both resistance and support in recent months. Beyond that, keep one eye on 0.8290-0.8310, which will likely offer up a certain level of resistance to any further gains. If the price fails to break the upper channel however, expect a medium term resumption of the longer-term downtrend.

Key levels to watch will be 0.8150, which has served as a consolidation zone in the past, and beyond the 100-pip support range between 0.8065 and 0.8165. As a side note, somewhat in support of the upside bias is the uptrend in the stochastic indicator. The stochastic indicator is normally used to identify overbought and oversold levels, but reversal points in the indicator can connect to form areas of support and resistance. An upwards trending stochastic can suggest that price is likely to become overbought before it becomes oversold. For this to happen, buyers would have to enter the market which would drive up price. 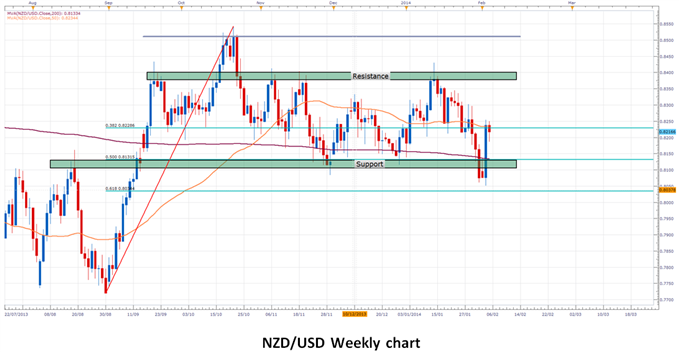 Next, take a look at the daily chart in the same pair. You can see that the current price is not only channel resistance, but also a 38.2% retracement of the August/October rise. This level, along with the 50% retracement, has offered support in the past, validating the importance of the Fibonacci levels. A close above the 38.2% retracement would indicate that buyers are in control of the market, and in turn, a further upwards move towards resistance range 0.8370-0.8400 flat.

Having said this, to break to the upside price needs to break both a key level and its 50 day moving average. If both these levels hold, expect the New Zealand Dollar to give back most of its post-announcement gains and drop back to support range at 0.8105-0.8130. Beyond that, initial downside targets are the 61.8% retracement at 0.8034 and the 0.8000 flat level.