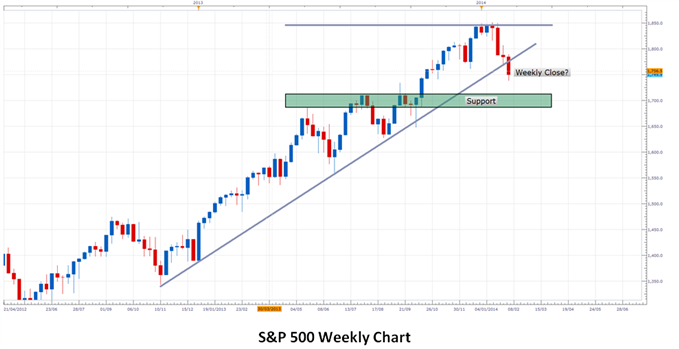 FOREX NEWS: Has the S&P (SPX) Finally Found Its Top?

As investors start to fear an equities may be forming, technical indications suggest that the S&P may, in the short term at least, found a top.

The S&P 500 has had gained nearly 200% since its 2008 lows, but such a meteoric bullish market has raised concern among traders and investors that we are in an equities bubble. Does the recent price action in the S&P 500 validate this concern, and if so, what will be the key levels to watch?

First, take a look at the weekly chart above. Price reaches all-time highs around 1,850 at the end of 2013, and having traded around that level for a few week, collapsed during the penultimate week of January. Since that week, the S&P 500 has continued to lose value, and this week has broken below its long-term channel support at around 1,770.0. If price closes the week out below this level, it could be a strong indication that the bullish equities momentum has weakened and that sellers could take control of the equities market. If so, look for a break in price towards previously significant support at 1,686.0-1,713.0. 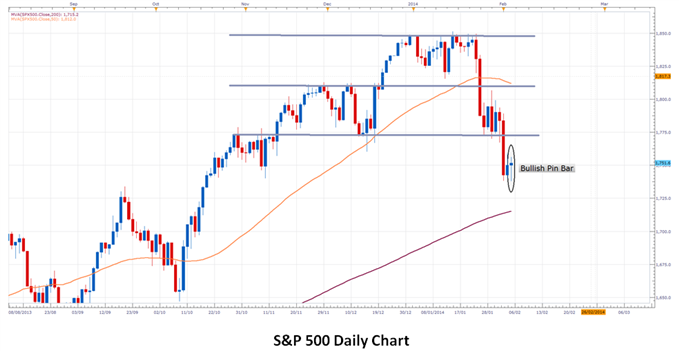 Now, take a look at the daily chart. This scale offers up a better view of the break from the 1,850 highs. The first major break came when price fell through previous highs at 1,809.0. A break below previous highs in an uptrend can indicate that the uptrend might be coming to an end, and as a result, many investors likely saw this as a good time to take some profits off the table. This wave of selling drove price down to penultimate trend high and previous support at 1,775.0, a level which offered some degree of support. Consolidation at this level likely came as a result of bulls entering on the dip and bears both placing and covering short trades.

Monday's action saw the bears take control, once again driving the S&P 500 down to three-month lows. Expect some consolidation around this level before either the bulls or bears take control of the market. A bullish pin bar can suggest there are more buyers than sellers in a market during a period (in this case daily), and the bullish pin bar (highlighted) suggests that price may even correct up to the support it broke at 1,775.0. Regardless of the size of the correction, price action between 1,740 and 1,750 will be pivotal in the determination of medium to short-term trend. A break below this level will signal that 1,850.0 was a medium-term top, and that a longer-term correction could be on the cards.

Uncertainty reigns supreme in the equity markets at the moment, and any indication that the bull market might be weakening may trigger a sell off. In the event of a sell off, the key level to watch will be the 200-day moving average. Institutional and retail traders alike use the 200-day moving average to help them determine the long-term direction of a market. The S&P 500 has not closed below the 200-moving average since 2011 and, if it happens, it could reverse the outlook of a large number of market bulls.