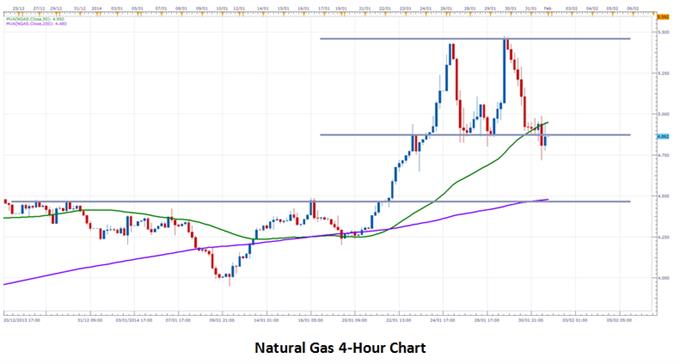 Most Signs Point to Further Downside in Natural Gas, But Not All

Has natural gas reached its highs? Technical analysis suggests it might have. Here's why and why not.

Take a look at the 4 hour chart in Natural Gas. Having risen in price for the majority of January, natural gas reached a top just short of 5.500 a little over one week ago. The level offered significant resistance, and the price dropped more than 10% to just above the 4.800 level. Following the drop, prices quickly recovered, once again reaching just below the 5.500 level earlier this week. However, resistance kicked in again and the price now sits just below previous support, falling as far as Friday lows of 4.750. The question now is, "Will this level act as support and price recover, or will it break?"

A couple of clues lie in price action on the 4-hour chart. The first is the double top pattern, formed over the last two weeks. If, at a particular level, the number of sellers outweighs the number of buyers, the price of the asset in question falls. This is a simple resistance level. If however, following a strong uptrend, price fails to break the same level of resistance twice, a double top is said to have formed. A double top can be a strong indication that an uptrend is losing momentum and, in turn, could be due a reversal. The support level to which price retraces before returning to (and being rejected by) the initial resistance level is called the neckline. If price breaks through the neckline after the second rejection, this strengthens the downside bias. In this instance, the resistance is 5.500 and the neckline is around 4.800.

As you can see, price formed a double top and subsequently broke the neckline on Friday. This suggests that there could be a further decline. Supporting this bias is the fact that, in addition to the neckline, price also broke through its 50 period moving average. Along with the 200 period moving average, the 50 period is one of the most watched by both retail and institutional investors. A close below the 50 period moving average can spark a wave of selling and, in turn, drive down the price of an asset. If the price does break further, the key level to watch will be 4.500. This level acted as resistance for a long time before it was finally broken mid-January, and will likely act as short to medium support if reached. 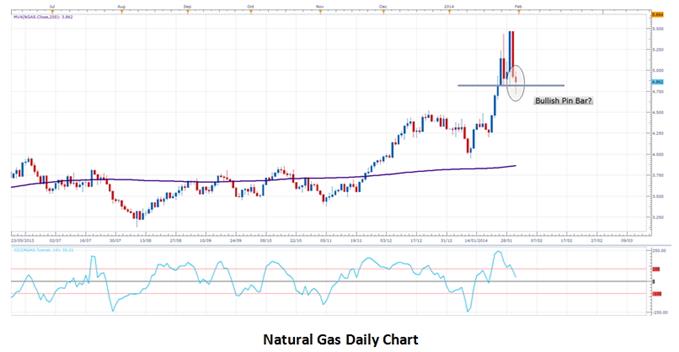 Next, take a look at the weekly chart in the same asset. Two things stand out on this chart as significant, one that supports the downside bias of the 4-hour chart, and one that does not. The first, is offered up by the commodity channel index (CCI) indicator. The CCI measures the variation of an asset's price from its statistical average, and in doing so, helps investors identify levels at which an asset might be overbought or oversold.

Having said this, Friday's price saw the formation of a bullish pin bar. A daily bullish pin bar forms when price starts and finishes the day at a similar level and falls during the session but gets pushed back up through bullish momentum. A bullish pin bar forming in Natural Gas suggests that price may, in the short term at least, bounce from current support at 4.800 before (and if) the downside momentum returns.