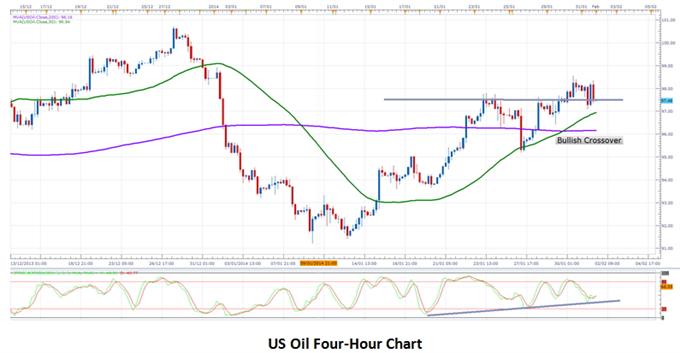 Take a look at the four hour chart in US Oil. During the first two weeks of January, the price of oil dropped quickly, falling to nearly 91.00, losing almost 10% from the 100.00 flat level. The subsequent two weeks saw the price recover to 98.00 at the end of last week, and currently sits just above 97.00. Two main features of the four-hour chart offer technical indications that the uptrend in oil is set to continue.

The second bullish signal comes from the stochastic indicator. Although traders generally use the stochastic indicator to identify overbought and oversold levels, the reversal points can also offer clues as to potential price movements. Highlighted on stochastic section the chart is an upwards sloping trendline, from which price reversed twice during the latter half of last month. On Friday, the stochastic indicator reached this trend line once again, and price subsequently reversed. This could again indicate the bullish momentum in oil is not yet over. If this bullish bias proves correct, the initial target would be 100.00 flat. Beyond that, key support/resistance between 100.70 and 101.00 are levels to keep an eye on. 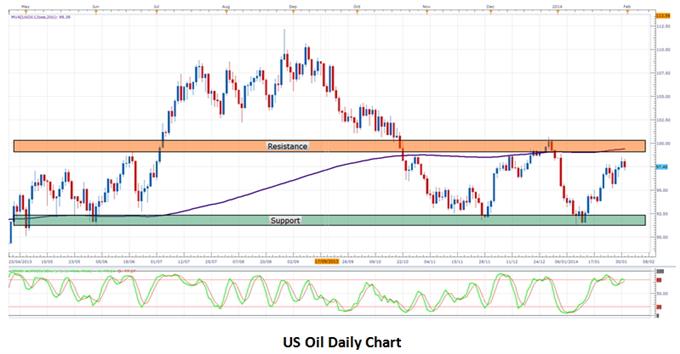 Now take a look at the daily chart. Despite having alluded to a bullish bias from the technical signals on the four-hour chart, the daily chart offers up the complete opposite picture. Three main indications suggest price could be due for a short to medium term downside reversal.

The first is the strong area of resistance highlighted on the chart. This area, between 99.00 and 100.00 flat, has acted as resistance on a number of occasions dating back to June last year. Price is fast approaching this area, and will likely need a strong upside catalyst (a piece of positive fundamental data for example) if it is to break through. A more likely outcome is the number of sellers overpowering the buyers as price reaches 99.00-100.00, and resistance holding once again. If this is the case, expect a reversal back down to the lower range support between 91.00 and 92.50.

The second indication in favor of this reversal is the 200 day moving average falling in line with the strong, aforementioned resistance area. As alluded to earlier in this piece, the 200 period moving average can offer strong support or resistance, strength that is amplified on a daily chart. The third and final reversal signal comes from the stochastic indicator.

Price has been overbought (or nearly overbought) for the majority of the last three weeks. The last time price was overbought, it coincided with the top aforementioned resistance area, suggesting another downside reversal could be on the cards.