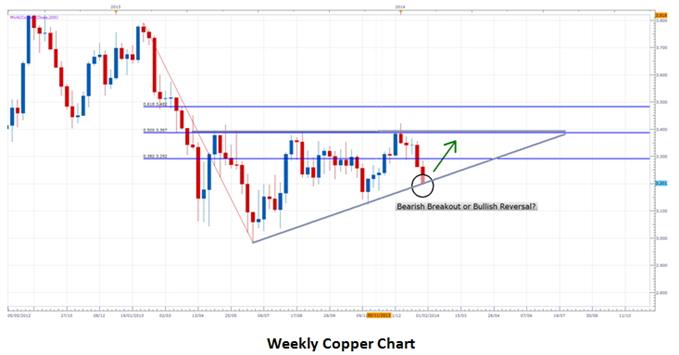 FOREX: Technical Analysis Hints At Bullish Outlook for the Metals

A number of key technical indications suggest that, over the coming weeks, both copper and platinum may regain some strength.

Take a look at the weekly copper chart above. The base metal has had a tough couple of weeks as worries that the Chinese economy is slowing fuels speculation that copper demand could weaken throughout 2014 and analysts reporting that, after an extended deficit, the supply of copper may shift into surplus this year.

From a purely technical perspective however, the chart suggests that the price of copper could be due to reverse and regain some of its 2013 losses. A long term ascending triangle has been developing since as early as April last year, with resistance at around the 3.400 flat level and support currently around 3.200 flat. An ascending triangle is often a bullish sign, as the higher lows indicate increasing demand or accumulation.

The key level to watch will be the aforementioned 3.200, around which price looks as if it will end the week. One of two things is likely to happen. The first, the support offered by the triangle's lower channel holds and price reverses to the upside. If this occurs, levels to watch will be the 3.400 flat initially, which is a combination of both historic resistance and the 50% Fibonacci retracement from the 2013 highs/lows, followed by the 3.500 flat just above the 61.8% Fibonacci retracement from the same levels. The second, price breaks through support. If this happens, selling pressure could push the price of copper initially down to 3.140-50, which has offered some degree of historical support, and if broken, as far as 3.100 and beyond. 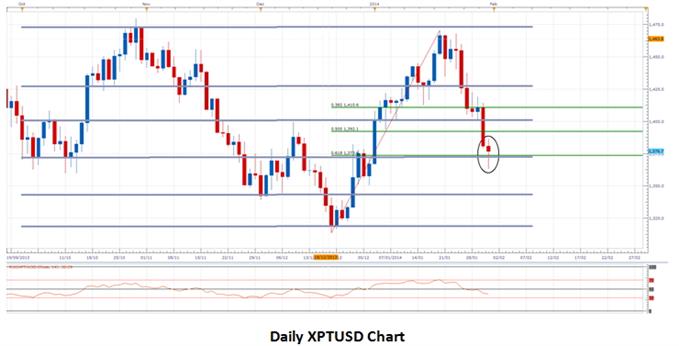 The next chart of note in the commodities market is that of platinum versus the US Dollar, or XPTUSD. Take a look at the daily chart above. Having fallen from highs early November 2013, platinum revered nearly all of its losses up until last week, when the market quickly reversed and tumbled to historic support around 1,375.0. Price action round this level should offer some indication as to whether the fall will continue down to previous lows below 1,325.0, or an upside reversal is likely. The first thing to note is today's price action has found a certain degree of support at the aforementioned 1,375.0. This level has not only acted as support in the past, but also coincides with a 61.8% retracement from top of the gains made between December and January. The 61.8% is often self-fulfilling in its acting as support or resistance, as both retail and institutional traders use it to enter and exit trades .If it holds as support, expect a rally initially up towards 1,400.0 and if price makes it through 1,425.0-1,425.0, to longer-term highs around 1,475.0.

Another feature of note on the chart s the bullish pin bar formed from today's action. While the market is not yet closed, it would take a rapid, strong decline to invalidate the pattern. Bullish pin bars from when sellers initially drive the price of an asset down, but buyers take control below a certain level and drive it back up. The pattern can indicate the reversal of a downtrend or the continuation of an uptrend after a correction.

Worth mentioning however, is the Relative Strength Index (RSI) reading of 39. The RSI is a momentum indicator that helps traders determine whether an asset is overbought or oversold. A reading above 70 suggest overbought and, in turn, overvalued, while a reading below 30 suggests the reverse. Current RSI in the XPTUSD suggests it is not yet oversold and a look through historic price action shows RSI hitting 30 before any significant reversal. Even with the strength of the 61.8% retracement and a bullish pin bar, price may still have a way to fall before we see any reversal.