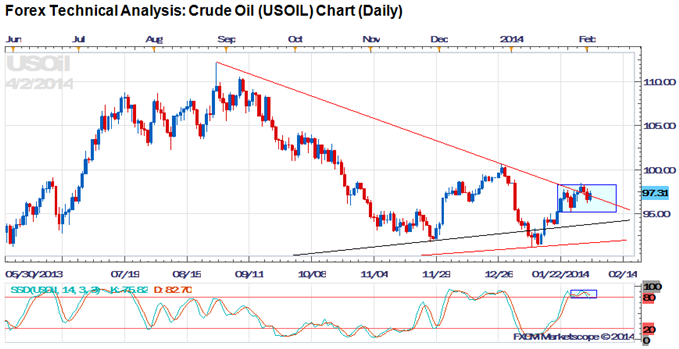 Concerns in emerging markets combined with speculation that developed economies are starting to slow have helped revive fear in financial markets across the planet. US Treasury yields falling have fallen and stock markets around the world are tumbling. The Japanese Nikkei 225, for example, closed lower by -4.1% on Wednesday and is now down over -15% in the past month.

Recent gains in energy markets may be a result of the combination of both forces. Crude Oil (USOIL) climbed steadily starting in early January, while Natural Gas (NGAS) has surged the past month (and then some). A weak US Dollar is helping these energy markets climb higher (they are priced in USD after all), while so too may the issue of many tense political hotspots popping up around the planet. Geopolitical strife in Latin America, Central Asia, and the MeNa region over the years has often led to higher energy costs.

Price action since the last weeks of April has seen both a series of higher highs and higher lows, as well as higher lows and lower highs. In trend terms, USOIL has shifted from an uptrend to a state of consolidation. This consolidation is denoted on the chart with the red trendlines and price currently faces the topside triangle resistance.

USOIL has rallied into the downtrend from the August and December highs (the topside triangle resistance), but bears have been thus far left with a weak reaction. The “sell” signal given by the Slow Stochastic indicator last week failed to exit overbought territory, and price has formed a range between $95.15 and $98.30. Despite today’s Inside Day candlestick forming after two days of modest selling, the Slow Stochastic indicator has flipped back to “sell,” but having not yet left overbought territory yet.

Patience would be one way to describe how the USOIL market is developing. Bulls have a case: the downtrend is breaking. Bears have a case: price is slipping near the breakout level, and the indicators are turning lower. For bulls, a break of the recent high near $98.30 would help drive the market towards the psychologically significant round number $100. For bears, a move below the range low of $95.15 as the indicator is presently positioned should help keep the recent triangle consolidation ongoing.

Natural gas is a slightly different animal than USOIL even though both are cousins in the energy family tree. There have been few enjoyable aspects of the recent cold spell in the United States, but natural gas has been taking it all in step. In fact natural gas demand has been boosted, as evidenced by the recent rise in price, as the cold temperatures have set in. This is an easy enough concept to digest – consumers use more heating oil to fight the intense cold. How intense is the recent cold? On January 7, New York City recorded its lowest temperature since 1896 at 4 degrees Fahrenheit. 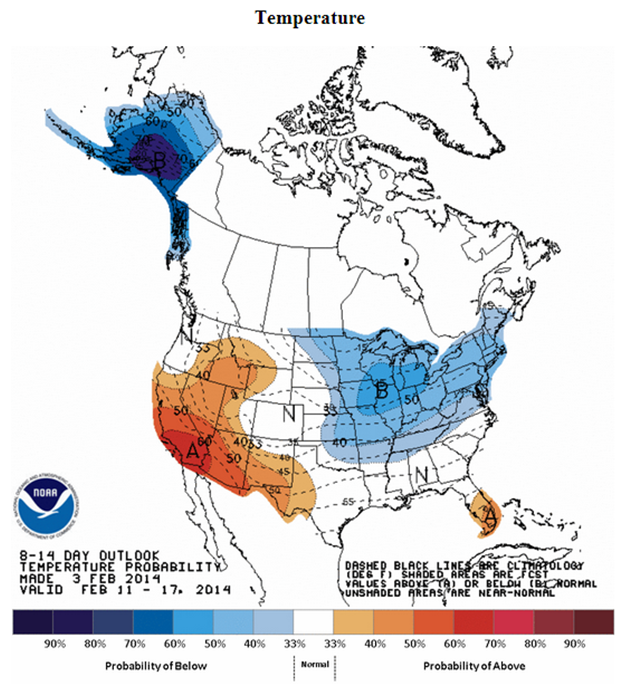 The National Oceanic and Atmospheric Association (NOAA)’s 8-14 day forecast shows that warmer temperatures are starting to return, especially to the southern parts of the United States. Natural gas’ best run of recent occurred when the more southern parts of the country were impacted – no surprise there considering the abnormal weather would leave the average person unprepared.

Demand has skyrocketed now for natural gas, if one thing is certain. Bentek Energy, an energy information company, compiled data that showed that January natural gas demand averaged 102 billion cubic feet (bcf) per day, almost 8 bcf/day above than the prior highest monthly average. In total, this resulted in 241 bcf consumed in January – more than any other month, ever. As another storm approaches the densest population areas of the country in the North and Northeast, demand for gas may yet be supported with below average temperatures due over the coming 8-14 day period.

The NGAS breakout above $4.430 has been violent, with a maximum gain approaching 30% to the January high. We’ve seen some big moves downward too, now that price has traded between $4.715 and $5.480 in just the past two trading weeks alone. Price has started to turn higher in spite of the recent “sell” signal issued in the Slow Stochastic indicator, and it is very possible that a “buy” signal is issued in the next day or two.

Even though NGAS appears bullish, the volatility seen is a caution for traders. The recent range offers tradable reference points, irrespective of trading style. Range traders can look for trades as long as price holds between $4.715 and $5.480. Breakout traders can wait for price to clear either side of the range to look for a move.