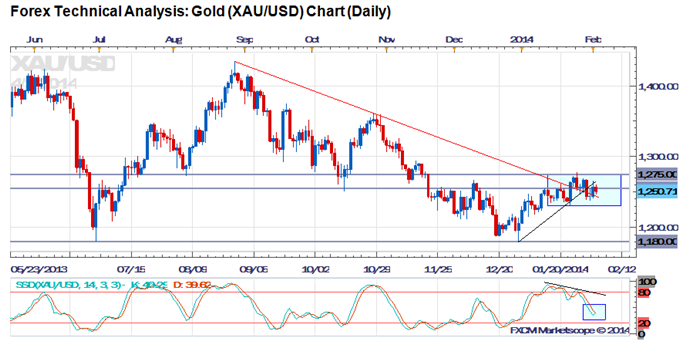 What can we learn about investor sentiment by examining the relationship between Gold and Platinum?

Precious metals in general may be at a sentiment turning point. There are two major forces in the market right now that are pulling price in either direction. Helping support precious metal prices has been the erosion of US Treasury yields and USDJPY as traders look for safety as developed market growth concerns and emerging market capital flight concerns linger. Hurting precious metals has been the Federal Reserve’s decision to taper its QE3 program, now down to $65B/month.

Price has been trading in a range since the middle of January, now that the rally trendline containing the January lows has been breached. Gold is in an important range right now between $1230 and $1275 as the market decides whether or not the break of the August and October 2013 highs will gather pace. The Slow Stochastics indicator, which had given a “sell” signal ahead of the Federal Reserve meeting last week, is close to issuing a “buy” signal today.

The recent range offers tradable reference points, irrespective of trading style. Range traders can look for trades as long as price holds between $1230 and $1275. Breakout traders can wait for price to clear either side of the range to look for a move. Below $1230, the market is exposed for a retest of the lows near $1180.

Price has barely budged the past two weeks yet the overbought condition in the Slow Stochastic indicator has been relieved. The last time the indicator was this low in its cycle was on January 2, and price had just settled above $1200 on the prior trading day. The observation that price has sustained its elevated level during resolution of the indicator’s overbought condition may be a warning for bears.

If Silver is Gold’s little brother, then Platinum (XPTUSD) would be its big brother. Platinum has traded at a premium to Gold since early 2013 (Platinum is more expensive than Gold; at a discount would mean that Platinum is cheaper). This is a strong indication that investors are less fearful of what’s going on in the world. Gold may be a store of value and preferred during times of financial uncertainty, but Platinum’s industrial uses make it more valuable during periods of economic growth.

The divergence between Gold and Platinum in recent days has been noteworthy. Fears of the developed economies slowing amid emerging market turmoil has reduced demand for the more industrial of the two precious metals, while the one that’s more of a store of value has sustained its gains. The Platinum-to-Gold ratio has fallen from 1.17 on January 20 to 1.08 today (February 4), a sign that fear in the market is rising.

There are two patterns in Platinum that traders can watch over the coming days. Traders with a shorter time horizon may see a range having developed on the chart between $1310 and $1480 since late October, though the range has a slight downward bias (the blue lines on the chart). Breakout traders with a longer time horizon may notice the failed attempt to move through the January 2012 and August 2013 highs earlier this month (the red lines on the chart). In either case a continued move below $1370, the grey horizontal line on the chart, would favor downside pressure in the coming days.