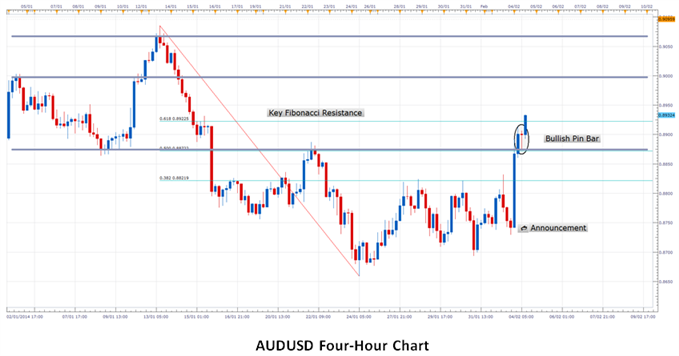 Late last night the Reserve Bank of Australia revealed its central bank interest rate decision. Traders watched the announcement eagerly, in anticipation of the potential price shift any change in the interest rate may cause. The decision? To keep rates unchanged at 2.5%. The reason? That "on present indications," stable interest rates are likely the most prudent course of fostering "sustainable growth in demand."

The question now is, "What effect did the announcement have on the Australian Dollar, and what can price action tell us about potential future movements?"

As a start, take a look at the AUDUSD four-hour chart above. The first technical point of note is the strength of the Fibonacci levels as calculated between the January 13 highs and the January 24 lows. Since the lows, price has broken, yet failed to achieve a daily close above 0.8821, which is the 38.2% retracement, on three (and nearly four) occasions. Often, when price is rejected on numerous occasions by strong support or resistance, it takes a fundamental catalyst to propel price one way or another.

Today's announcement (highlighted) served as the required fundamental catalyst, and price broke through the 0.8821 level, not looking back until it reached 0.8900 flat. At this point, 0.8875 (key historical support resistance and 50% Fibonacci retracement)-0.8900 (psychologically relevant round number) offered resistance, but only enough to form a bullish pin bar, again highlighted. A bullish pin bar is often a sign that, despite some selling pressure, the bulls are still in control. The key level now is the 0.8922 level, which is the 61.8% Fibonacci retracement of the aforementioned high/low. If price can break and close above this level, which at the moment looks likely, expect an initial move up to 0.9000 flat. This level has some psychological importance and, during the first week of January, has acted as key support and resistance. Because of this, expect some initial resistance and a short-term correction, perhaps as far as 0.8950. If price breaks 0.900, the key level to watch will be the January high at 0.9067. 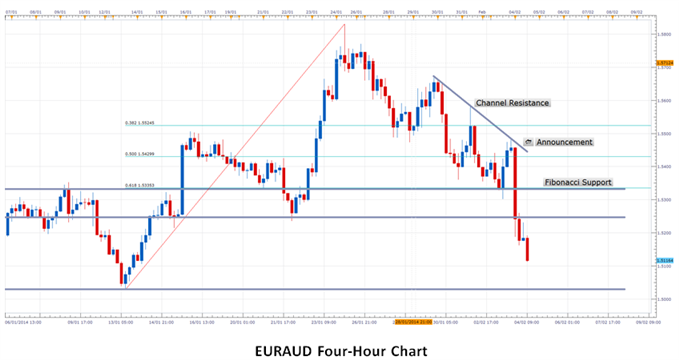 On today's announcement, the EURAUD dropped from channel resistance, breaking through previously significant support at 1.5335, the 61.8% Fibonacci retracement of the aforementioned low/high. A small amount of support from 1.5200 caused small bounce, before price regained its downside momentum and broke lower. From here, price action around 1.5100 will be important. If price can break through that level, expect a clean run down to January lows around 1.5030 and further to 1.5000 flat.

All said, today's announcement proved catalyst to break a number of key levels against its major currency counterparts. Price action around the key levels mentioned will offer clues as to whether the current momentum is enough to sustain a longer-term trend.