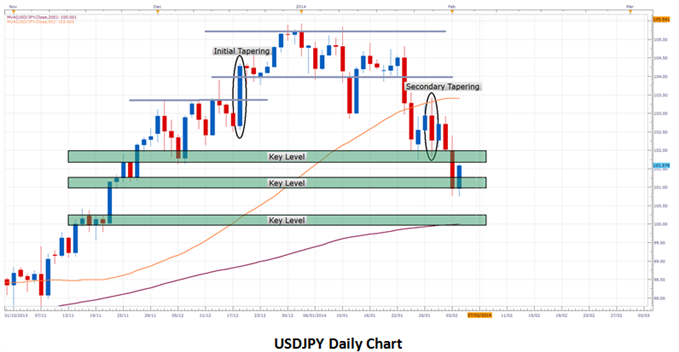 On January 29th, the Federal Open Market Committee (FOMC) announced it would further reduce its asset purchase program by $10B, from $75B to $65B. This comes after last year's December 18 initial announcement that it would begin tapering by reducing the program from $85B to $75B. The question on every traders' lips now is, "What can the currency market's reaction tell us about the future of the U.S. Dollar?"

Take a look at the USDJPY chart above. The chart shows approximately three months of price action. The first thing to notice is that the market reacted differently to the tapering news on both announcement days. The initial announcement, highlighted on December 18, caused a strong bullish movement favoring the Dollar. The announcement catalyzed a break through monthly resistance at around 103.36, and the Dollar closed at its highest level against the Yen since 2008. Price then found support around the 105.00 flat level and, a couple of days mid-January aside, ranged between 104.00 flat and 105.00 flat.

Price then broke this range to the downside and consolidated in anticipation of the second announcement on January 29. Interestingly, despite further tapering, price closed the day down from its open, and substantially below its highs. The only real explanation for the difference in response is that the market had already factored in the secondary taper through advance expectations. Regardless, price has since broken the day's lows and now sits around 101.50, from lows at 101.00. Price action around this level is key to the future direction of the pair. Broadly speaking, FOMC tapering should stimulate the Dollar against the Yen, so fundamentally the bias should be bullish. If price remains above the key level highlighted (101.00-101.24), and can break above 102.00, expect a resumption of the bullish trend that dominated the last two years. From 102.00, apart from the inevitable friction that will result at flat levels, price has a pretty clean run up to 105.00.

The interesting action will occur if price breaks through the key level above which it currently resides. A muted response to the FOMC announcement coupled with a break below the 50-day moving average indicates some degree of contrarian force at work. Many Dollar bulls will have bought on the recent dip, and the more risk averse traders will likely have placed stops somewhere between 100.00 and 101.00. If price breaks 101.00 therefore, these stops could be triggered putting downside pressure on the Dollar. In this scenario, regardless of the FOMC decision to taper further, the Dollar could lose strength down to 100.00, where a combination of a previous key level, a psychologically relevant round number and the 200 day moving average should act as medium term support. Price action beyond there remains unclear, but watch how the Dollar behaves around the aforementioned key levels to gain some insight.