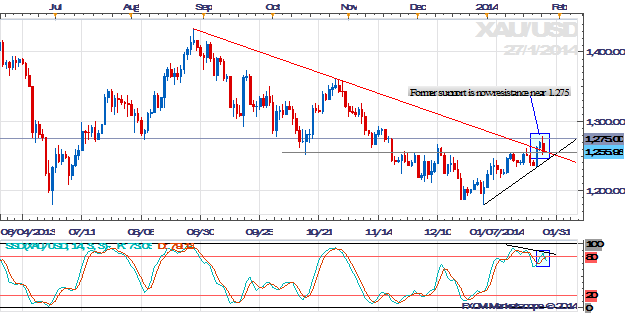 Concerns about emerging markets persisted to start the week. Watch price for clue to the outcome!

After several days of worries in emerging markets helped revive fear in financial markets across the globe, the flight to safety paused on Monday as evidenced by the decline in precious metals. Thin markets in Asia saw Gold rally up towards $1280.00/oz., but bullion settled the day lower by -1.02% at $1257.11/oz.

Gold’s decline on Monday may not be due to fears of an emerging market crisis developing being relieved. Instead, it makes more sense that traders are looking to the Federal Reserve’s meeting this meeting as a potential catalyst for price action. Plus, fears of emerging market turmoil are in part due to concern over what might happen at this week’s Federal Reserve meeting.

What are the charts telling us about investor sentiment?

Both Gold and Silver’s decline on Monday appears to be related to the Federal Reserve’s meeting on Wednesday. Even the Japanese Yen, which had enjoyed a safety-related boost the past several days, declined on Monday, as the US Dollar’s appeal returned: the US 10-year Treasury note yield increased to 2.748% from 2.715%.

Because bond prices and yield are inversely-related, this shows that traders are selling their US Treasury holdings, which over the past several months has been an indication that the market believes the Federal Reserve will buy fewer bonds. Currently, Bloomberg News’ consensus forecast sees the Federal Reserve reducing its QE3 stimulus program pace from $75B per month to $65B per month.

If the Federal Reserve is going to reduce its stimulus, the consensus among market strategists headed into 2014 is that US interest rates (Treasury yields) should rise and as a result of the US Dollar having more appeal (a higher yield), precious metals will continue their losing ways of 2013. Both Gold and Silver are struggling at key levels that would suggest traders too believe another cut to QE3 is coming.

After the rally the first several weeks of 2014, Gold attempted to break the downtrend from the August and the October highs. However, bullion immediately traded into a more serious level of resistance, former support at $1275 (in August and October 2013). The study of technical analysis dictates that former levels of support and resistance should be treated interchangeably once breached as reference points.

This resistance near $1275 would be strengthened if Gold were to break its rally that’s occurred in January. The Slow Stochastics indicator has created a series of lower highs despite price continuing to rally, which has created divergence. With divergence existing as the indicator now issues a sell signal on the daily chart after the failure at $1275, there is growing risk of a downside move. 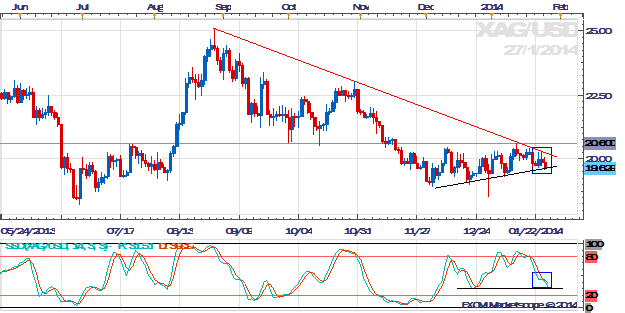 Silver did not enjoy the recent rally that its big brother Gold did. Instead, it continues to trade in a sideways congestion pattern, between $19.000 and $20.600 since the middle of November. Like Gold, Silver failed to break the downtrend from the August and October 2013 highs.

We are using the Slow Stochastics indicator as a guide to see if the recent consolidation will break. Indicators, like price, can unfold in patterns. On the daily chart above, the indicator found support near 30 before turning higher in its range in the middle of December. If the Slow Stochastics break lower than 30, it may be a warning that the recent consolidation is readying to break too.