2 Reasons USD/JPY Is on "Shaky Ground"

The Nikkei and USDJPY are highly correlated, far more so than the US dollar (USD) and US equity markets. When the Nikkei rises, the Japanese yen (JPY) falls, pushing USDJPY higher in the process. And, keeping with that relationship, when USDJPY falls, the Nikkei usually falls with it.

The four-hour chart below shows USDJPY (in green and red) alongside the Nikkei (in yellow). You can see that while the two occasionally diverge, they are always quick to find each other again. Actually, they’re diverging right now as USDJPY pushes to new highs while the Nikkei stagnates below 16,000.

This divergence between USDJPY and the Nikkei means that one of the two instruments is leading the other, and it could easily be USDJPY that’s doing the leading, but we’re about to see a major Nikkei rally to new yearly highs as it catches up with USDJPY.

There are some other considerations, however, that add to the case that this USDJPY rally won’t last. First, we’re seeing some significant RSI divergence on both the four-hour and daily charts for USDJPY, and this move higher is not confirmed by the oscillator. The chart below shows that divergence. 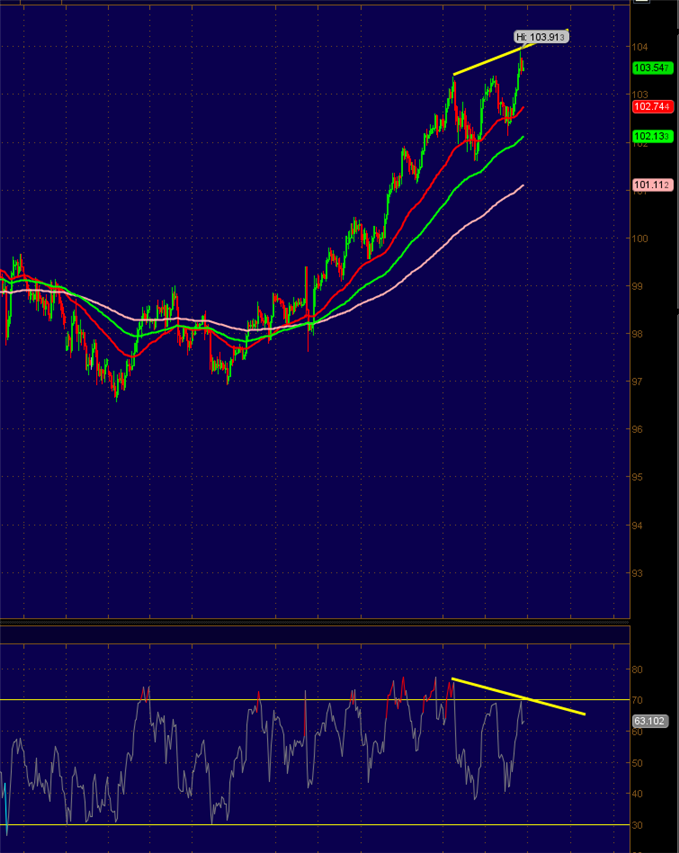 There’s also a similar divergence on the four-hour chart for Nikkei futures, as demonstrated below. 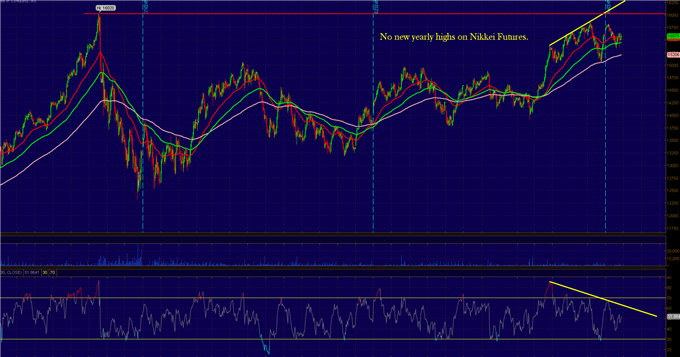 Divergence in and of itself is not a reason to short, and it’s certainly not a reason to short such a strong uptrend. It is, however, worth noting that USDJPY appears to be on shaky ground up here. If the Nikkei fails to move to new highs, thus confirming the USDJPY move, both instruments could be in for a serious correction, and this is a developing theme should be watched carefully by traders across all markets.