The United States has long been known as a massive consumer of fossil fuels, including oil and natural gas, and for the past 30 or 40 years, energy security has been a major concern of politicians and government agencies alike.

The US has actually begun taking steps to reduce dependence on foreign energy sources, especially since many of these sources are located in the Middle East, a region not known for its political stability.

US oil production has increased so much, in fact, that the US Energy Information Agency (EIA) began projecting that the US will become a net exporter of crude oil for the first time since 1995.

That projection actually began to come to fruition earlier this month when the EIA announced that US crude oil production averaged 7.7 million barrels per day and exceeded imports for the first time since 1995.

Furthermore, total petroleum net imports in October fell to the lowest level since 1991. The EIA is projecting that total US crude production will average 7.5 million barrels per day this year before jumping up to 8.5 million per day in 2014.

While this is great news for the American consumer, it may not be such great news for our neighbors to the north. Most people tend to think about the Middle East when discussing oil imports, but the leading importer of oil to the United States is actually Canada, and by quite a wide margin.

According to the EIA, in August, the United States imported 2,613,000 barrels of crude a day from Canada, nearly twice as much as the number-two provider, Saudi Arabia.

If Canadian oil isn’t finding a home in the United States, it will still be able to find a home elsewhere, most likely China or India, but that will come at the price of increased transportation costs, among other complications.

If US companies were to stop buying oil from Canada, it would reduce one of the most important real money supports for the Canadian dollar (CAD), thus boosting USDCAD.

USDCAD hasn’t shown much dollar strength since the 2008 financial crisis. The pair quickly gave back its crisis gains after spiking up to just above 1.30.

In my opinion, the market hasn’t done a good job pricing in this significant shift in energy policy and how it may impact USDCAD. The pair is currently well supported by a monthly trend line and the 50-month exponential moving average (EMA) (in red), and I expect the pair to use this support level to begin an assault on 1.10.

Guest Commentary: The USD/CAD Pursuit of 1.10 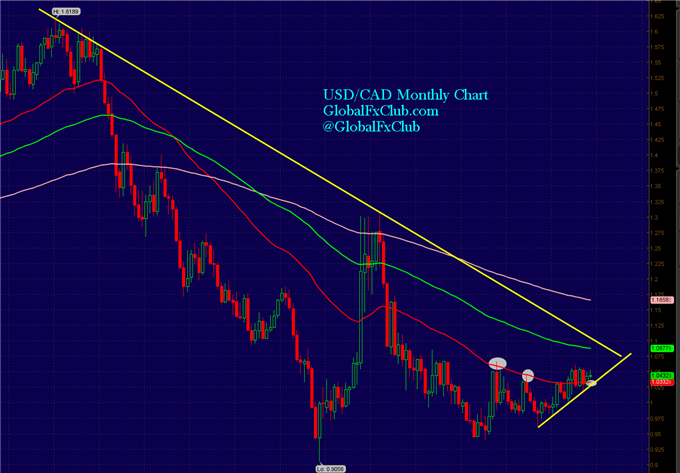 While some significant swings are possible as the market begins to prepare for the Fed’s eventual tapering of QE measures, I firmly believe that we will see USDCAD climb towards that 1.10 figure and beyond in the coming months (or years) as the pair finds a new range to reflect this new reality.