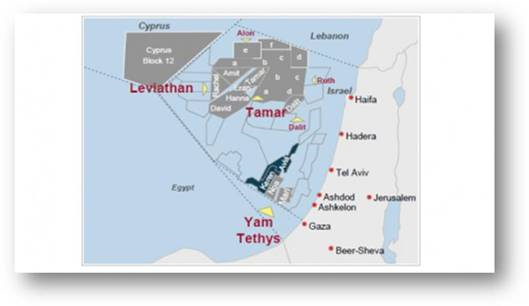 The Israeli Shekel (ILS): A "Conflict Currency" No More

Many see the Israeli shekel (ILS) as a barometer of Middle East tension, but with newly discovered natural gas fields coming online, Israel’s economy and its currency are making great strides.

Historically, the Israeli economy has been mostly at the mercy of Middle East political friction. The Jewish country’s economy has weathered all sorts of crises, including several wars and other conflicts, a banking system collapse in the 1980s, brutal inflation, population explosions, boycotts, painful recessions, and severe financial mismanagement.

Still, the Israeli economy should be considered a success story by all measures. Its tech industry is a role model for all emerging economies, exports continue to grow annually, and GDP is expected to grow 3.5% this year, a similar result to 2012, which is phenomenal considering its strong association with the markets of Europe.

In fact, Israel possesses one of the few economies in the Western world that actually grew during the global financial crisis. On top of that, the relatively recent discovery of large amounts of natural gas off its coast in the Mediterranean is estimated to add an extra 1% or more to GDP over the coming years.

Israel’s list of accomplishments and growth opportunities goes on and on, but the underlying idea is the same: the Israeli shekel (ILS) is a compelling story.

The Perennial Event Risk for Israel

For all the great sentiment Israel attracts, Middle East watchers have always had the feeling that its success story is tenuous. Israel continues to be threatened on several fronts, and the internationally perceived occupation of Palestine breeds fears that a new intifada, or uprising, might break out at any moment.

The latest panic in Israel caused throngs of citizens to rush towards the gas mask distribution centers after Syria threatened to fire scuds tipped with deadly chemicals if the US and its allies attack the Assad regime as punishment for using chemical weapons on their own people. The situation has since calmed in favor of a diplomatic solution, but concern was reflected in the shekel and the USDILS rose to over 3.67 during those uneasy days.

USDILS generally tends to rise in times of conflict due to anticipation of decreasing export revenue, and the larger the threat, the larger the move. For example, the 2006 Lebanon War saw the shekel rise as the fighting began. The shekel then returned to a more baseline level as the conflict wore on and once the level of escalation had been capped. The rise was not dramatic, as Hezbollah’s rocket campaign was not believed to be capable of causing long-term damage. Stocks, however, did plummet as hostilities commenced.

Even during times of relative peace, there have always been threats, both open and latent, be it background calls for violence by Islamists or the ever-present potential for a new war to break out any time due to an unforseen event.

Israel is constantly on guard, absolutely fearful that the next war could be its last. However, this low-level anxiety concerning Israel’s existence is felt by the global community, and it’s interesting to see how this is factored into the price of the shekel.

Looking forward, and assuming we can put aside the risk of confrontation, the real driver affecting the Israeli shekel is positive export growth, particularly from natural gas. Since the first major gas field production came online, we have witnessed a major appreciation in the Israeli currency.

The Leviathan gas field discovery in 2010 was the largest in a decade. The energy triangle between Israel and Cyprus (containing the Tamar, Leviathan, and other gas fields) is estimated to contain roughly 33 trillion cubic feet of gas, which is enough to supply Israel’s needs for 150 years.

New gas discoveries in the area are still being consistently announced, with the latest discovery of 0.7 trillion cubic feet revealed on August 21. There is also talk about extracting oil in the area if it is found to be economically feasible.

As new discoveries are made, and new production facilities come online, the shekel continues to appreciate despite the best efforts of the Reserve Bank of Israel. For a while now, it has been a policy of the central bank to be active in buying foreign exchange to keep the shekel low and combat its appreciation, although it currently seems to be losing the battle.

Many wonder if Israel will experience Dutch disease: the effect of exploiting natural resources which causes a decline in the manufacturing and agricultural sectors due to a skyrocketing national currency. The high value of the currency makes exports more expensive, negating the benefit of the yield from the new resource. When the Tamar gas field production started earlier this year, the shekel dropped sharply, and many asked how low the shekel could go once the other major fields come online. 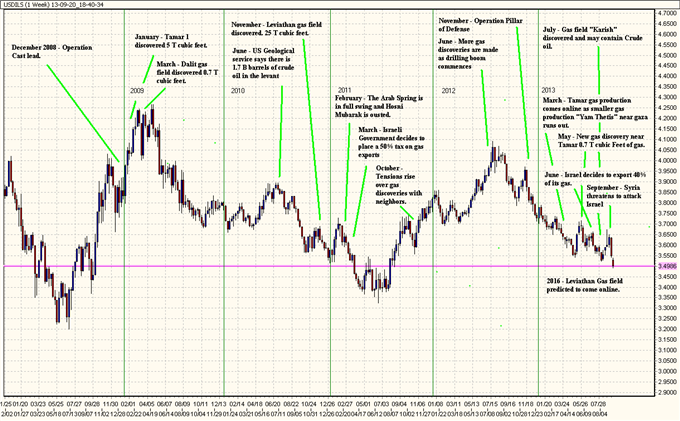 Should peace “break out” between Israel, its neighbors, and the Palestinians, and once all gas production facilities are operating, we could compare the Israeli economy and the shekel to Singapore and the Singapore dollar (SGD).

The SGDUSD exchange rate is traditionally about 0.80, and Singapore’s economy is closely associated to the energy sector, but it’s also an export economy. As it is, there are many similarities between the two tiny countries, both of which are surrounded by historical foes, and the similarities should increase over time.

The USDILS could easily surpass 2.00 in the coming years, but this depends entirely on peace in the Middle East, or at the very least, a solid road map towards that objective. Once Israel’s borders are firmly set and secured, boycotts will be dropped, military spending will decrease, and the Arab world will be opened up, the combination of which will cause Israeli exports to explode.

Optimists could buy the shekel for a great long-term trade, and even pessimists can do the same, but of course will need to be prepared to get out on short notice.