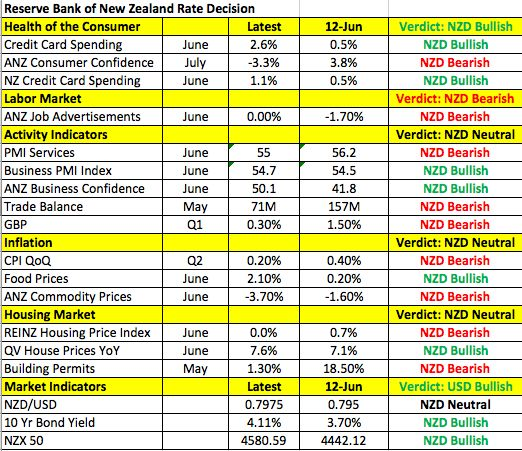 The Most Likely Outcome for the RBNZ

Despite slow growth across the Asia-Pacific region and this week’s Wellington earthquake, the Reserve Bank of New Zealand (RBNZ) seems likely to leave rates unchanged at Wednesday’s policy meeting.

Eurozone PMI data will be the premier event risk this week in the forex market, but the Reserve Bank of New Zealand (RBNZ) monetary policy announcement due Wednesday evening (21:00 GMT) is also important. And, on this quiet trading day, we want to take the opportunity to discuss what traders might expect from the RBNZ.

Monetary policy decisions are always important, but at a time when the biases of world central banks are diverging, interest rate decisions can affect currencies even when no changes are made. For New Zealand, specifically, slower growth in Australia and China could have profound effects on the outlook for the domestic economy, although post-earthquake reconstruction has provided substantial underlying support so far.

Remember that New Zealand is still recovering from the 2011 Christchurch earthquake, and while the damage from this week's 6.5-magnitude earthquake that hit the capitol of Wellington was limited, it could still impact the RBNZ's rate decision.

This week’s quake was actually stronger than the 6.3-magnitude Christchurch earthquake in February of 2011, but thankfully, no casualties were reported this time. After the 2011 earthquake, the RBNZ responded with a 50-basis-point (bp) rate cut, and the question now is whether the RBNZ feels that easing is again necessary.

When the central bank last met, policymakers left interest rates unchanged at 2.5% and cut the 2014 growth forecast from 3.3% to 3%. Since then, we have seen very little improvement in New Zealand’s economy.

The table below shows how the New Zealand economy has performed since the June meeting.

As seen above, consumer spending increased in June, but confidence weakened significantly in the month of July. Job advertisements were flat, and service-sector activity slowed while manufacturing activity expanded. Meanwhile, business confidence ticked up and the housing market saw both improvement and deterioration. Unfortunately, credit conditions may have tightened with interest rates on the rise.

At the last meeting, the RBNZ expressed specific concerns about the level of the New Zealand dollar (NZD), and central bank Governor Graeme Wheeler talked about the currency being overvalued and actually warned of intervention. However, any such intervention is expected to be covert because the Bank is only looking to "take tops off dollar peaks where possible."

While the slowdown in the regional economy and the recent earthquake increases the risk of a rate cut by the RBNZ this week, we feel that the deterioration has not been significant enough to warrant easing. Therefore, at most, we expect dovish comments from the central bank, which could still be enough to undermine the recovery in the NZDUSD.